Trump and Grover Cleveland Have a Lot in Common – Will that Include Winning Two Non-Consecutive Terms?

Michael A. Genovese serves as the President of the Global Policy Institute at Loyola Marymount University. He is the author of over fifty books including the forthcoming The Modern Presidency (Columbia University Press). 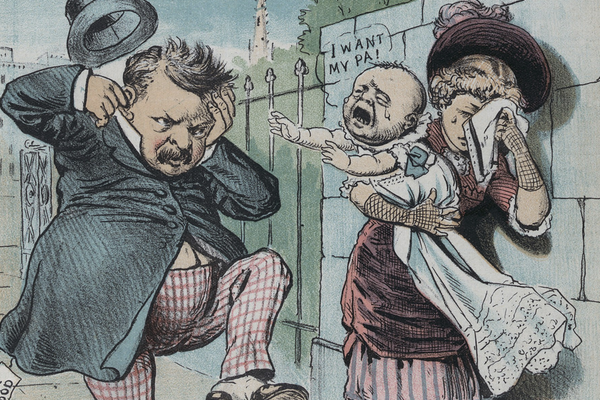 "Another Voice for Cleveland," The Judge Magazine, 1884. Library of Congress Print and Picture Division

While continuing to deny that he lost the 2020 presidential election, Donald J. Trump is, by all measures, planning another run for the White House in 2024. He said as much at a 2020 Christmas Party at the White House: “We’re trying to do another four years,” he said, adding “I’ll see you in four years.”

While this is unusual, it is not unprecedented. Martin Van Buren lost in his bid for reelection in 1840, and tried, unsuccessfully to regain his party’s nomination in 1844 and 1848. Teddy Roosevelt voluntarily left office in 1908, then tried to gain the Republican Party’s nomination in 1912 against incumbent Republican William Howard Taft. Roosevelt failed, then ran unsuccessfully as an independent “Bull Moose” candidate, splitting the Republican vote and handing the election to Democrat Woodrow Wilson.

Grover Cleveland is the only defeated president to regain his party’s nomination, and then win the presidency, thus becoming both the 22nd and 24th president of the United States. Trump is hoping to be only the second person in history to win the presidency after losing in a bid for reelection. Trump’s ambition should not be discounted.

Apart from hoping to share with Cleveland the distinction of being the only presidents to be reelected after losing a reelection bid, Cleveland and Trump have several other things in common. Both are from New York. Both suffered from what many thought would be a disqualifying sex scandal revealed in the middle of the race. In Cleveland’s case, it was revealed that he had fathered a child out of wedlock. A famous cartoon of the time showed Cleveland with a woman carrying a baby with “Ma, Ma, Where’s my Pa” as the caption. While this would be scandalous today, imagine the impact in the 1880s.

In the 1884 presidential election, Cleveland, rather than engage in the usual denial and distraction strategy, admitted that the story of his out of wedlock child was true. In publically accepting responsibility, Cleveland went on the counter-offensive, and his supporters emphasized his honesty, referring to him as “Grover the Good” for his extensive reform achievements as both Mayor of Buffalo and Governor of New York. Cleveland was a man of honesty in his public life but of questionable character in his private life. He had the advantage of running against James C. Blaine of Maine, a man who, while spotless in his private life, was widely believed to be a scoundrel in his public life, and was often referred to as “Slippery Jim.”

In the 2016 presidential race Donald Trump faced the “Access Hollywood” scandal, where a tape recording of the candidate making deeply insulting and offensive comments demeaning women went public. While this caused a backlash, the story was partially overshadowed by the news released that same day that opponent Hillary Clinton may have illegally stored and sent thousands of emails while serving as Secretary of State. The two scandals may have cancelled each other out.

Other commonalities between Cleveland and Trump – apart from both losing bids for reelection – are that both had a predilection for young women. In fact, while president, Cleveland married 21-year-old Frances Folsom (he is the only president to be married in the White House). Trump’s affinity for beauty queen contests and his association with Jeffrey Epstein likewise suggests an appetite for young women.  Additionally, both were rotund individuals with large egos and a drive to prove themselves to be strong and manly.

There are also stark contrasts between the two men. Cleveland was born to poverty while Trump was born to wealth. Cleveland was widely known as a reformer while Trump suffered from repeated ethics dilemmas. Cleveland, after his loss, accepted defeat with dignity and equanimity, in spite of suggestions that some fraudulent votes were cast in Indiana and elsewhere. For the good of the country, Cleveland accepted defeat. In fact, he went so far as to write a personal letter to president-elect Harrison expressing his desire “to assure you of my readiness to do all in my power to make your accession to office easy and agreeable.” Cleveland went so far as to attend Harrison’s inauguration ceremony and held an umbrella for Harrison as he delivered his inaugural address in the rain.  Trump, on the other hand, not only refused to accept defeat, or attend his successors inauguration, he went out of his way to interfere with vote counting and waged a public campaign to undermine the validity of the election, while also trying to overturn the results of a democratic election, the culmination of which was the January 6 insurrection and attack of the U.S. Capitol.

Another area where the two diverge is in how they are ranked by political scientists and historians. Cleveland usually ranks about number 25, somewhere in the middle of the pack, while Trump is rated somewhere in the 40s, near or at the bottom.

2024 is a long way off, and much can happen between now and then, but regardless of circumstances or conditions, Donald Trump seems determined to erase his defeat and rise phoenix-like to right the perceived wrong done to him. Give him credit, he is relentless.