Understanding Gun and Police Violence Lies Between History and Power

Kwasi Konadu is the John D. and Catherine T. MacArthur Chair in African and Latin American Studies at Colgate University. 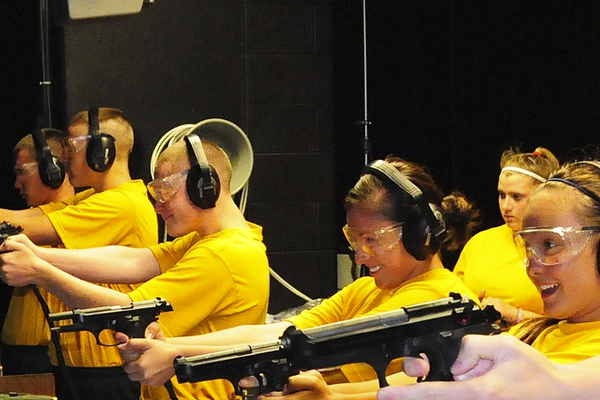 National Gun Violence Awareness Day is here, yet given the continued spikes in gun and police violence since the past year, one could argue a reminder isn’t necessary. According to the Alliance for Gun Responsibility, African Americans are 10 times more likely than whites to die by gun homicide. They are also more than three times likely to be killed during a police encounter.

Gun and police violence are not separate affairs. Police shootings are part of America’s gun problem: police violence is a leading cause of death for young men. There is a correlation between police killings, states’ gun control laws, and gun ownership rates. And peoples of African ancestry, more than others, pay for this mix of gun culture and militarized police with their lives.

After Derek Chauvin's conviction, many believed justice prevailed and that the George Floyd Justice in Policing Act would become law. Yet further police killings just 24 hours after the verdict, and President Biden marking Floyd’s murder with a discussion rather than a law, shows why that belief may be premature.

U.S. police kill civilians at higher rates and in larger numbers compared to other democracies and policy changes, body cameras, and media scrutiny have not reduced the racial disparity in fatal police shootings. We need to understand the limits of policy prescriptions in the face of deeply rooted cultural and social norms related to policing and gun violence. The Supreme Court ruled racial segregation in public schools was unconstitutional in 1954, but today public schools are more segregated by race and income more than six decades ago.

We cannot likewise reform our way out of policing and guns because they are tethered to settler colonialism and slavery’s ongoing violence. Understanding this past in the present outweighs any act of protest or congressional bill. But grasping the past means understanding that a third of U.S. adults cannot pass a U.S. citizenship exam, most K-12 students have a poor grasp of U.S. history and so do many lawmakers. Indeed, billionaire David Rubenstein undertook a project to teach politicians U.S. history.

The issue of police and gun violence, especially against non-white peoples, is marginalized if not absent in the public’s understanding of both. There are stubborn perceptions: guns don’t kill, people do; most cops are good with only a few bad ones; the threat of police violence experienced by non-whites are overblown or justified, and high-profile cases of police “misconduct” are anomalies that are fixable through reform. These perceptions ignore the history of the power derived from control over people.

In the colonies that later formed the United States, policing and violence were tightly braided. If policing and gun violence were circles of a Venn diagram, the overlap would be enforcement—the act of power over another. Enforcement animated police violence, and as policing became bureaucratized so did this legitimacy shield and give police greater discretion in the use of deadly force.

Policing in the United States and in England evolved from community watches. These were supplemented by unarmed and unpaid constables without uniforms. In urban areas, like Boston and New York City, centralized police forces became publicly funded, full-time bureaucracies. Their mandates were to ensure social rather than crime control. Private businesses transferred the cost of their protection to the state, which paid for policing.

U.S. rural, southern areas used a mixture of “slave patrols,” bounty-hunting, deputization, and general surveillance of chattel—to apprehend, deter revolt, and enforce racists laws. Together, rural and urban policing were corrupt and brutal, operating under the control of politicians, who were beholden to economic elites. Political and economic elites who created the venues for public drinking, prostitution, and workers to strike, then criminalized those behaviors, assigning them to an identifiable “class” dangerous to social order.

Protests or strikes were criminalized as “riots.” Police were legally authorized to use force under the guise of rule of law, to patrol and surveil, and to wear uniforms which signaled a clear difference between them and the “dangerous” elements. The central problem that led to policing was never a crime, but political and economic power. As centralized police departments became the norm, they decided to arm officers after officers had already armed themselves. Indeed, white people were armed in the United States long before centralized police forces, and so white police forces simply formalized the “right to bear arms” argument, seemingly reserved for white people. Viewed from this perspective, gun control has also meant limiting gun access to peoples of African ancestry.

Though gun and police violence are in the crosshairs of current political debates, the real targets are the history and the very coercive power used to build this nation. The nation cannot be made anew and accountable through feel-good implicit bias training, anti-racist workshops, and policy prescriptions. Facing deeply rooted cultural and social norms around policing and gun violence requires confronting histories and concentrations of power which make them viable, and at a minimum making police violence an integral part of National Gun Violence Awareness.