William H. Pruden III is the Director of Civic Engagement and an Instructor in History and Social Studies at Ravenscroft School in Raleigh, North Carolina. 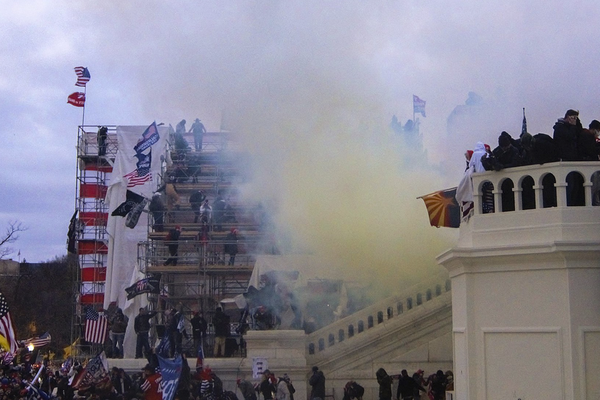 With arrests mounting and prosecutors starting to develop their legal strategies to address the January attack on the Capitol, sedition, the centuries old concept broadly defined as conspiring to overthrow or destroy by force the government of the United States, or to forcibly prevent the execution of the law, is back in the news.  The frequently referenced stepchild to treason, sedition has long been a dark specter, a sword hanging over the not-really-United States, almost from the beginning of the nation's existence.  Indeed, whether we realize it or not, talk of sedition is but another indication of the divisions that have haunted the distinctive experiment that is the United States since its inception.

Ironically, for all the language about force and conspiracy, the legislative enshrinement of sedition has resulted most often in use as a vehicle for squelching political opposition while testing the limits of free speech.  In its statutory infancy it was part of the infamous Alien and Sedition Acts the Federalists enacted in an effort to and hang on to their diminishing political power at the end of the eighteenth century. The Sedition Act was aggressively used to try and silence John Adams's political opponents with the act making criticism of the President a violation but not of the vice president, who just happened to be running for president against the incumbent. Fortunately, Federalist prosecutors had the good sense not to target candidate Thomas Jefferson, but his fellow Republican Vermont Congressman Matthew Lyon was not so lucky, and earned the distinction of being both the first to be prosecuted for violating the act and, after his conviction, the first person to be elected to Congress while sitting in jail.

While the original sedition act was allowed to expire upon Jefferson’s ascension to the Presidency the concept remained alive, reemerging when Woodrow Wilson aggressively used the newly enacted Sedition Act of 1918 to limit opposition to World War I. Wilson aggressively tried to silence that part of the populace unhappy with the actions of a president who had won re-election on the slogan “He kept us out of war.” In an ironic turn, while fighting the war he said would make the world “safe for democracy,” Wilson used the sedition act to the suppress it at home, most famously prosecuting socialist leader and perennial presidential candidate Eugene V. Debs. Those sedition-based prosecutions would lead to Supreme Court cases that offered the first significant clarion calls concerning free speech in the United States, albeit as dissents by Justices Oliver Wendell Holmes, Jr. and Louis Brandeis.

The concept, not to mention the laws still on the books, have reappeared on the public's radar as prosecutors have posed the possibility of charging at least some of those involved with the January 6 attack on the Capitol with sedition. And yet those discussions should remind us of the complicated nature of the concept and the law.  A look at recent cases offers some interesting clues to how sedition cases can proceed as well as the elements that may resonate with juries. The 1988 Ft. Smith Arkansas case is as a cautionary tale for those who believe that sedition is the way to proceed against the January 6 terrorists.

The Ft. Smith trial took place over the course of seven weeks from February 16 to April 7, 1988, when the all-white jury of ten men and two women returned a verdict of not guilty against the fourteen individuals who were charged with conspiring to overthrow the U.S. government.  It was a multi-faceted trial that heard from almost 200 witnesses—113 for the prosecution and 79 for the defense--as federal prosecutors presented evidence that sought to prove that ten of the defendants had conspired and plotted to overthrow the federal government.  In addition, they asserted that the other defendants were guilty of trying to kill a federal judge and a Federal Bureau of Investigation (FBI) agent.  According to the scenario laid out by assistant U.S. attorney Steven N. Snyder, it all began at a July 1983 meeting in Hayden Lake, Idaho, when leaders of a number of racist and neo-Nazi groups began the planning and implementation of a program that would ultimately include robberies, bombings, and murders as part of a conspiracy to create a white Aryan nation in the United States.

The defendants were a geographically diverse but like-minded group that included multiple Ku Klux Klan grand dragons as well as leaders of other white nationalist groups, all allegedly intent on overthrowing the U.S. government. But in their efforts to prove that the diverse cast of alleged conspirators had met and developed such a plan, the prosecution seemed to get bogged down in the over 100 specific and overt acts which the group had allegedly committed. In the end not only were there no convictions for conspiracy, but 14 men went free—or at least as free as they could, given that five were already in prison for previous offenses.

District Court Judge Morris Arnold worked hard to keep the trial on track, but between the extensive number of charges and the numerous defendants—some of whom delivered their own opening statements—it was not your everyday event.  But, when the prosecution’s systematically presented scenario, a veritable roadmap detailing the meetings and actions that constituted the alleged conspiracy, ran head-on into one defendant’s assertion that the issue at hand was not conspiracy but rather freedom of speech, and that the group’s professed effort to replace one government with another was little more than democratically-based free speech, the jury returned its verdict of not guilty.

The trial results led to many post-verdict interpretations, analyses, and responses. On the one hand, defendants saw it as a victory for religious freedom in the United States.  Other commentators maintained that prosecutors had placed too much faith in witnesses whose credibility and motives were suspect. Others saw the verdicts as a disturbing reflection of the nation’s changing cultural landscape, a “real setback in the war against organized hate.” It certainly represented a hurdle in the efforts to address the increasingly aggressive efforts of the white nationalist movement, one whose profile and outreach would only continue to grow, culminating it now appears, in the January 6 attacks.

Yet as we look to Ft. Smith as a guide for any January 6 prosecutions, we must recognize that the advent of social media leaves prosecutors in unchartered waters.  The evidence provided via social media is a massive improvement over the questionable witnesses who were so central to the Ft. Smith prosecutor’s case.  Cell pictures and preliminary reports, including those used in the Trump impeachment proceedings, paint a very different picture from previous efforts.

But what does that really mean?  Convictions under the Sedition Act carry significantly tougher penalties, including jail sentences of up to 20 years, and the pursuit of such charges would leave no doubt about the seriousness with which the government, representing the American people, took what happened on January 6.  And yet with admittedly lesser, but more easily provable, charges available, is it worth the risk of yet another unsuccessful sedition prosecution, one which might only serve to embolden both those who are found not guilty as well as their followers--especially since so many profess to simply have been doing their patriotic duty, following the wishes of their commander in chief?

The frustration officials felt in the aftermath of Ft. Smith was only reinforced in 2010 when the government brought a sedition case against the Hutaree militia, a so-called Christian patriot group.  And in neither the Ft. Smith nor the Hutaree militia trials were prosecutors dealing with defendants who could point to the President of the United States—one whose own actions were scrutinized as part of the same effort, only to be acquitted in an impeachment proceeding--as a central part of their defense.  For better or worse, as it has for literally hundreds of years, the specter of sedition looms over the American populace, its very existence and potential power a reflection of the divisions from which its original enactment sprung and which its current contemplated use all too clearly reflect.  But it may not be the best way to solve the problem.