"Refusing to Be Governed Like That": The Dangers of Trusting in History's Judgment

Joan Wallach Scott is professor emerita in the School of Social Science at the Institute for Advanced Study in Princeton, NJ. Her books include Gender and the Politics of History, thirtieth anniversary edition(2018), and Knowledge, Power, and Academic Freedom (2019). She is most recently the author of On the Judgment of History. 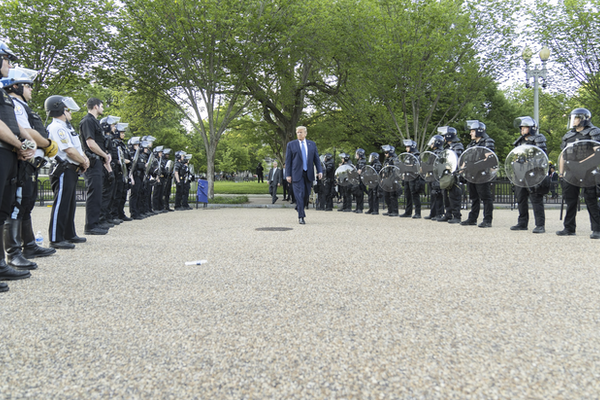 It’s probably not surprising that in a moment of heightened political tension, with the future of democracy at stake, “history” has acquired a prominent place in our discourse.  History not as the story of the past, but as the account that will be given of our present to the future.  And not simply a dispassionate account, but a moral judgment about the actions unfolding before us.

The idea that “history” will provide some kind of final reckoning is widespread, a consolation in dark times.  To take only one of many examples, here is the journalist Michael Luo writing in the New Yorker in 2019 about the scandal of President Trump’s immigration policy:  “It is up to [Acting Director of Citizenship and Immigration Services Ken] Cucinnelli, others in the Trump Administration, and potential enablers in the Republican Party to decide how they wish history to judge them, even as they carry on a shameful legacy that American democracy has struggled to escape.”  It is as if “history” were an independent force, moving in a necessarily progressive direction, a guarantee that somehow the good and the true will prevail in the end.

Then there is the more cynical—or perhaps realistic—view as expressed by Attorney General William Barr in response to a reporter’s question about the president’s decision to pardon the convicted felon Michael Flynn.  “When history looks back on this decision,” she asked, “how do you think it will be written?”  “History is written by the winners,” he replied, “so it largely depends on who’s writing the history.”

Much as I deplore Barr’s politics, above all the way he has undermined the rule of law and the constitutional separation of powers, I don’t disagree with his assessment.  There is no autonomous force of history inevitably bending in the direction of justice.  History is what  historians decide is the meaning of the past.   And, as Barr recognizes, it is most often “official history,” the story told by the victors, that prevails.

From this realistic perspective, the idea that history is an independent judge of human actions is a dangerous one for two reasons:  first, it seems to guarantee a better future no matter how we behave; and second, it suggests that the victors’ story is not only factually, but morally correct.  I think we should be wary of both of these ideas.

If the judgment of history is delivered by the victors, it serves to legitimate their rule.  It leaves out the challenges they have faced and the violence they may have committed to prevail.  It implies no feasible alternative to the direction events have taken.  Indeed, it depicts these events as inevitable.  If belief in their inevitability justifies the victors, it can also depress those who opposed them, making their struggles seem futile since the outcome is imagined to have been preordained. The idea of an inevitably progressive direction for history can, of course, inspire us to act, but it also can deter us.  If things are going to get better anyway; if it is true, as the abolitionist Theodore Parker wrote, that “the arc of the universe is long, but it bends towards justice,” then why bother to hasten its arrival?

My answer to that question, one I know is shared by many historians, is that it is human action that makes history, and historians who decide what counts as that history.  There are no guarantees about what the future will bring; there is only the determination to change things or to preserve them, and conflicts among humans about what direction to take.   These conflicts take shape in specific social, political, cultural, and economic contexts, justified by ideology, by ethical and moral precepts, and by appeals to aspirational ideals such as equality and justice.    It is not only the victors who make history, but those who challenge them as well.

The fact of conflict means that history is never settled; there is always another story to write about what happened in the past.  Professional history writing itself reflects the conflicts; there are vast differences among us about what counts as a fair and accurate representation of the past.  The current debates about slavery in the United States offer a good example of this.  The dominant narrative of our national history—one the president seeks to enforce by one of his many executive orders—is that slavery was an unfortunate glitch in the founding of the republic.  Since the end of the Civil War, things have improved—gradually, it is true, and with some setbacks, but inexorably nonetheless.  This is the message of the “patriotic education” project Trump announced as the mandate of his newly created 1776 Commission.  It will teach that “America's founding set in motion the unstoppable chain of events that abolished slavery, secured civil rights, defeated Communism and fascism and built the most fair, equal, and prosperous nation in human history."  Trump is joined by a number of historians who share this vision and who have been critical, especially, of the alternative view offered by the NY Times 1619 project.

That project articulates a view of American history that brings together the many critical histories that have been written about the legacy of slavery in this country and it speaks to one of the demands of the reparations movement for an accounting of what they take to be the nation’s primal sin.  1619 marks the date of the arrival of the first enslaved populations on American’s shores.  On that ground, these historians and political activists argue, were built the structures of white supremacy that remain with us today.  The reparations movement has been misunderstood, I think, as simply a call for reimbursement of the financial debt the country owes those whose unpaid labor enabled enormous economic growth.  It is surely that, but also—and I think more importantly—a defiant rereading of the history of the United States.  It seeks to call the nation to account in the moral sense of taking responsibility for a debt incurred.  As Ta-Nehisi Coates put it when making the case for reparations, “For Americans, the hardest part of paying reparations would not be the outlay of money. It would be acknowledging that their most cherished myth was not real.”

As I write this, the argument continues about whether 1619 or 1776 (slavery or a political revolution) is the true beginning of our national history.  It has been enflamed by the protests that emerged after the murder of George Floyd (and so many other unarmed black people during the summer of 2020) and by Trump’s winking encouragement to white supremacist militias during the first presidential debate.  We are in a moment when the very history of the nation is at stake and when politics is (as always) an undeniable aspect of the positions taken--politics in the sense of contests for power, contests all the more vital because the interpretation of the meaning of the past will influence the direction of the future.

If there is such a thing as the judgment of history, it is always contingent and never final.  It is instead one delivered by people acting to bring about change. This is the case for those in the reparations movement, in the 1619 project, and in the campaigns that insist that Black Lives Matter.   They act, they write, they protest, because the conditions of their lives and the ethical principles by which they live lead them to defy or resist the policies and actions of those who govern them.  What is at stake is not a belief in a preordained future, but a determination to alter the present.  It is precisely because they don’t believe that history will guarantee a better future that they act to bring a different future into being.

It is in these terms that we ought to write our histories, not as the unfolding of linear logic, but as stories of never-ending quests, as contests for power that don’t take temporary victories to be final determinations, and as the collective effort of those who (in Michel Foucault’s words) “refuse to be governed like that” and whose refusal—whether or not it is triumphant—constitutes a movement for change.