Fraught Family Reunification After the Holocaust

Rebecca Clifford is Associate Professor of Modern History at Swansea University (UK) and author, most recently of Survivors: Children's Lives After the Holocaust (Yale University Press). 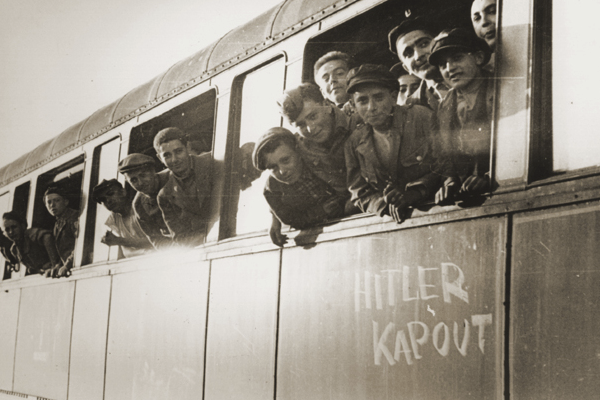 As the Second World War ended, an estimated 150,000 – 180,000 child survivors of the Holocaust emerged from their hiding places or centers of internment. They were a tenth of Europe’s pre-war population of Jewish children, a fragment of an entire generation. In the months and years that followed, these child survivors began to search for their families, and some (we will never know exactly how many) were reunited with surviving mothers and fathers. But this was rarely the happy ending that we would like to imagine.

In my latest book, Survivors: Children’s Lives After the Holocaust, I found that the stories of child Holocaust survivors upended my assumptions again and again, and nowhere was this truer than around the emotive topic of family reunions. We are so used to encountering scenes of joy as families are reunited in Holocaust film and literature that it is challenging to accept the reality of a bleaker picture. The notion that family reunification was the best possible outcome for a survivor child is deeply seductive, particularly as so many survivor children found themselves with no remaining family members at the war’s end. Children who found their way back to surviving mothers and fathers were frequently told how lucky they were. Yet of the 100 children whose stories I examine in the book, not one who was reunited with surviving parents described the experience as joyful. They often had far more painful post-war experiences than those who found themselves living in care homes, without family. Their stories expose just how deep is our desire to see the survival of a family in and of itself as a victory.

If we consider the complexities of the early postwar period, we begin to see why it was intensely difficult for surviving children and parents to find themselves together again. The reunified Jewish family was profoundly fragile. Parents and children had often been apart for years, and the war had changed them. They sometimes could no longer speak the same language. Children had acquired new wartime identities, particularly if they had survived in hiding: they may have had new names, new religious identities, and new attachments to families who had hidden them during the war. If they were young enough, they may have had no memory of their parents at all.

Moreover, parents had changed. They had experienced internment and concentration camps, forced labor, life in hiding, or the anxiety-ridden experience of those who tried to pass as Aryan. Many were in a state of physical and emotional collapse by 1945. These exhausted adults returned to find strangers living in their homes, their possessions scattered, their jobs gone. Adult Holocaust survivors faced staggering poverty in the early postwar period, and children who went back to live with surviving parents often found that their families lacked housing, food and clothing. In such circumstances, the additional burden of caring for a child could push a family to the point of collapse.

We can see this in the numbers. The American Joint Jewish Distribution Committee supported 120,000 child Holocaust survivors after the war, and a majority of these – 85,000 children – were living with a surviving parent or relative who was too impoverished to care for the child without financial aid. Children living in care homes intended for orphans also frequently had surviving parents. In September 1946, the French aid organization Oeuvre de secours aux enfants (OSE) had 1,207 Jewish child survivors living in its network of care homes, but only a quarter were full orphans. We might expect to see these numbers decrease over time, as parents found their feet in the postwar world and reclaimed their children from care, but the opposite was true: the OSE was shocked to find that as time went by, more and more surviving parents tried to place their children in the agency’s care. Surviving parents saw in such institutions an opportunity for their children to have a better quality of life than in the family home. These arrangements were often meant to be temporary, but they also extended the period in which children and parents grew stranger to each other – sometimes until too much time had passed for the relationship to be restored.

Many children struggled to trust survivor parents who were essentially strangers. Some felt anger that their parents had abandoned them, and further anger when these parents removed them from wartime rescue families where they had felt happy and comfortable. Whether they had survived the war in hiding or in internment, children had often needed to be obedient, quiet and good to stay safe. With that need gone, they could rebel. They withdrew emotionally from their parents, refusing to touch them or even to accept them. Henri O., who survived in hiding in the Netherlands as a very small child, was reunited with both his mother and father after the war. He was five years old. He recalled the discomfort of their reunion:

When they turned up, I recognized my mother, and I said, 'you stayed away a very long time.’ Yeah, two and a half years, half my life. Okay. And then somebody says, ‘Why don’t you want to sit on your daddy’s lap?’ So I sat on my daddy’s lap. But it wasn’t quite the same.

For some child survivors, one of the greatest frustrations in these reunited homes was the enforced silence around the wartime past. Many had urgent questions that surviving parents did not want or could not bear to answer, particularly about murdered relatives. Those living with surviving mothers asked after their murdered fathers (or the reverse), and frequently had their enquiries rebuffed. That precious knowledge – what was my father or mother really like? – was withheld by parents too traumatized to engage in the work of remembering their dead partners. In other cases, the enormity of a parent’s own traumatic memories interceded in the daily life of the household. Cecile H., who had survived the war by escaping with her mother to neutral Switzerland, was reunited with her concentration-camp survivor father after the war:

Father had found photos in the barracks or SS lockers when he was liberated, and had taken some because he was worried that no one would believe him. He hid these pictures in the house on top of a closet, and once I took those pictures and lay them all out on the floor, and I’ll see those pictures until my dying day. […] I kept having nightmares after that, and [my father] burned them. He said, ‘I’m never going to talk about that again.’ It was a difficult time for us, after the war.

When thinking about families after the Holocaust, we should be attuned to the incredible challenges that these families faced. We should consider what sorts of outcomes awaited children who went back to live with surviving parents, and how this felt to children, what it meant to them, and what role the memory of the recent past played in reconstructed households. We should, moreover, be attuned to what light these stories of reunified families might shed on a present world in which child refugees are regularly separated from their parents – a practice which, these stories suggest, is not only unimaginably cruel in the present, but is one with harrowing long-term consequences for refugee families as they journey into uncertain futures.