Tony Platt is Distinguished Affiliated Scholar, Center for the Study of Law & Society, University of California, Berkeley. He is the author of Grave Matters: Excavating California’s Buried Past (Heyday, 2011). A longer, documented version is available from Tony Platt: amplatt27@gmail.com. 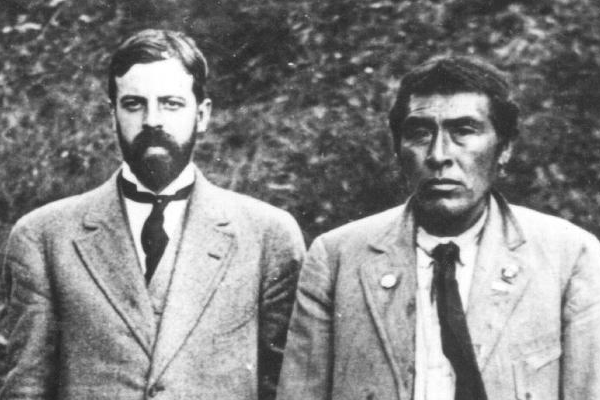 Alfred Kroeber with Ishi, a member of the Yahi tribe who survived the California genocide, 1911.

I welcome the news that the Berkeley campus has joined the un-naming movement. It provides us with an opportunity to learn about histories we’ve forgotten and to make the honoring of spaces and places into a democratic process rather than a done deal decided by elites in back rooms.

John Boalt, the 19th century anti-Chinese crusader, is already banished from Berkeley’s law school walls. The University is likely to follow the example of a local elementary school and remove the name of John LeConte, an unreconstructed Southern racist, from the building that houses the physics department.

Next on the list is anthropologist Alfred Kroeber (1876-1960), after whom Kroeber Hall is named. He didn’t campaign to restrict immigration to the United States on the basis of race, and he wasn’t a white supremacist. But he was the key academic in a department and museum that rose to fame – literally and scientifically – on the bodies of the Native dead.

Kroeber’s reputation in anthropology rests upon his prodigious scholarship, his success in building Berkeley’s department of anthropology into a nationally ranked program, and his documentation of the cultural experiences of California Indians prior to Spanish colonialism and American genocide. Kroeber supported Native land claims, for which the Council of California Indians acknowledged the role he had played in the struggle “for long delayed justice.”

To most California Tribes and Native activists, especially those in the Bay Area, however, Kroeber’s legacy is more bitter than sweet.

Kroeber failed in his responsibility to speak out publicly about the genocide that followed the Gold Rush. “What happened to the California Indians following 1849 – their disruption, losses, sufferings, and adjustments – fall into the purview of the historian,” he wrote in 1954, “rather than the anthropologist whose prime concern is the purely aboriginal, the uncontaminatedly native.” The transformation of everyday life after contact was traumatic, Kroeber conceded, but, he added, “it is not gone into here.” It wasn’t that he didn’t know. He just didn’t go into it.

One consequence of this moral cowardice was that until the 1960s a crudely racist imagery about California Indians dominated public discourse in the state, making it easier to frame their near extermination in the imagery of natural history, subject to inevitable processes of erosion and decline, rather than as the result of a planned human intervention. Many people hold Kroeber accountable because he had resources and authority to influence public opinion. Of course, one person, even Kroeber, did not wield such power, but he became the personification of meticulous amnesia. Unlike his widow Theodora Kroeber, who spoke out against the genocide, and his colleague Robert Heizer, who at the end of his career issued a mea culpa for his role in treating California’s Tribal peoples as “non-persons,” Kroeber kept his silence.

As a core faculty member of Berkeley’s department of anthropology (1901-1946) and as director of the anthropology museum (1925-1946), Kroeber oversighted the University’s collection of more than ten thousand Native human remains that it plundered from Native graveyards, and tens of thousands Native artifacts that were excavated from graves or bought cheaply from the desperate survivors of genocide. The University backed up Kroeber’s collecting frenzy and in 1948 proudly showed off to Life magazine its “bone collection [that] has filled two museums and overflows into the Campanile.”

I’ve recently read hundreds of Berkeley’s archaeological reports. Not once have I come across an account that treats the excavated as other than specimens for research. No prayers are spoken, no rituals practiced, no indication that the living and the dead share a common humanity.

Kroeber failed to document how Native peoples survived against all odds and lived to fight another day. Activists looking for inspirational accounts of struggle and resistance find little solace in Kroeber’s work, which has a tendency to be nostalgic for the good old days rather than forward-looking.

Kroeber was not particularly interested in the cultures of local Tribes, reporting that they had made “an unfavorable impression on “early voyagers” as “dark, dirty, squalid, and apathetic.” Moreover, he concluded in 1925 that the Bay Area Indians were “extinct as far as all practical purposes are concerned.”

Walking around the Berkeley campus, it is easy to get the impression that the Ohlone are extinct. A plaque at the university’s entrance acknowledges that a Spanish expeditionary force set up camp here in 1772. There are no plaques to mark the settlements of people who lived in this area a few thousand years earlier. The football stadium commemorates faculty, staff, and students who died during World War I. There is no memorial to the thousands of Ohlone who lived and died in this region. A graceful archway celebrates the life of Phoebe Hearst whose philanthropy funded the excavation of Native graves. There is no comparable recognition of the thousands of people who were dug up from their graves in the name of science and “salvage anthropology.”

Today, the descendants of the Verona Band of Mission Indians and other Ohlone people in the Bay Area are asserting their right to federal tribal sovereignty and to reclaim their ancestral lands, cultural artifacts, and the remains of their dead that are among the nine thousand still held by the University.

We should take advantage of this un-naming opportunity to honor the people who made Kroeber’s professional success possible and who are un-remembered in the university’s landscape.