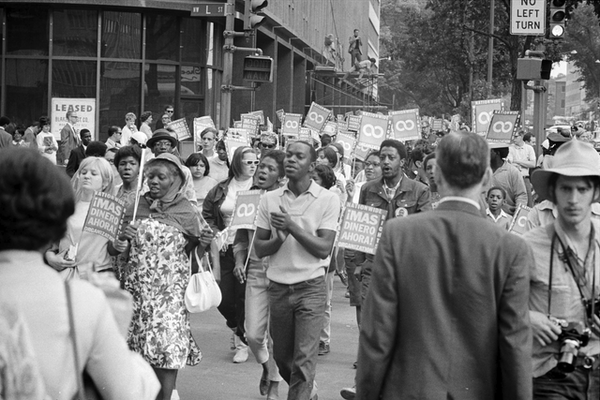 Conservative columnist Ross Douthat’s recent “The Religious Roots of a New Progressive Era" indicates that a new progressive age is possible. Although he does not say much about the Progressive Era of 1890 to 1914, he does mention the religious Social Gospel movement of that period. And historian Jill Lepore has noted, “much that was vital in Progressivism grew out of Protestantism, and especially out of a movement known as the Social Gospel, adopted by almost all theological liberals and by a large number of theological conservatives, too.” Like then, so now, Douthat sees a “palpable spiritual dimension” to much of the “social justice activism, before and especially after the George Floyd killing,”

The columnist’s article does not mention Martin Luther King (MLK), but the social justice movement he lead in the 1950s and 1960s demonstrated the greatest spiritual-based progressivism between the end of the Progressive Era and today. And rekindling and updating King’s ideas offers us the best hope of creating a new progressive era in the 2020s.

Most of the 1890-1914 progressives did not attempt to overthrow or replace capitalism, but to constrain and supplement it in order to insure that it served the public good. Their efforts reduced corruption in city governments, limited trusts and monopolies, expanded public services, and passed laws improving sanitation, education, housing, and workers’ rights and conditions, especially for women and children. Progressive efforts also helped pass pure food and drug laws and create the National Park Service.

After three consecutive post-World-War-I Republican presidents from 1920 to 1932, Franklin Roosevelt renewed the progressive spirit in the 1930s, but it was the Baptist minister MLK, leading the Southern Christian Leadership Conference (SCLC) beginning in the 1950s), who restored religious fervor to progressive causes.

It was his religious vision that propelled King, that and the injustice suffered by black and other people. This was true from December 1955 at his Dexter Avenue Baptist Church, when he helped start the Montgomery Bus Boycott in Alabama because of Rosa Parks’ arrest for defying segregated bus seating, until April 1968, when a sniper’s bullet ended his life on a motel balcony in Memphis.

In mid-1955 King had received his doctorate in systematic theology from Boston University. But even before then, while a student at Pennsylvania’s Crozier Theological Seminary, he had been strongly influenced by Gandhi’s ideas. As historian Stephen Oates writes in his biography of King, he considered Gandhi “probably the first person in history to lift the love ethic of Jesus above mere interaction between individuals to a powerful effective social force on a large scale.”

In 1957 MLK delivered a powerful sermon on “Loving Your Enemies.” In it he said, “Yes, it is love that will save our world and our civilization, love even for enemies.” He also spoke of the need “to organize mass non-violent resistance based on the principle of love.” Moreover, he analyzed and amplified in great detail various meanings of love, especially agape, (“understanding, creative, redemptive goodwill for all”). In February 1968, just two months before his assassination, he told a congregation at Ebenezer Baptist Church in Atlanta that he wanted to be remembered as someone who “tried to love and serve humanity.”

If we look at many of King’s speeches and activities their religious underpinnings jump out at us. As a 2013 article in the Jesuit magazine America pointed out, “His famous speech, ‘I Have A Dream’ [1963], was actually a sermon rooted in the words of the prophet . . . Isaiah who too had a dream of a world made new with God’s loving justice.” That same article quotes King as saying, “In the quiet recesses of my heart, I am fundamentally a clergyman, a Baptist preacher.”

The first progressive idea of MLK’s for today is that of racial justice. More than a half-century after his death, it is not just the continuing protests following the police killing of George Floyd that force us to confront this continuing injustice. It is also the Black-Lives-Matter movement, the disproportionate number of black and Hispanic deaths from COVID-19, the economic inequality facing these minorities, and their higher unemployment and incarceration rates. Moreover, the political polarization and racism being stoked by President Trump is another indication that we are still far from the promised land that King dreamt of in his “I Have a Dream” speech--“that day when all of God’s children, black men and white men, Jews and Gentiles, Protestants and Catholics, will be able to join hands.”

The second progressive idea of King’s is his stress on peace and non-violence both at home and abroad. This emphasis owed much to the Gandhian influence on him and to the belief, as he expressed it in a 1957 sermon, that mass non-violent resistance tactics were to be “based on the principle of love.” Although reflecting mainly his religious principles, his non-violent approach also had--and has--political implications. In February 1968, he warned that rioting could lead to a “right-wing takeover,” and indicated that riots just helped segregationist-presidential-political-candidate George Wallace. Today, in the face of some, but not as much, lawlessness following the killing of George Floyd, some observers sound a similar warning--any lawless activities would aid Donald Trump.

Abroad, the main target of King’s protests was the Vietnam War. In April 1967, in a New York Riverside Church speech, he displayed the type of empathy that deeply religious people should when he said the following about the Vietnamese people: “So they go, primarily women and children and the aged. They watch as we poison their water, as we kill a million acres of their crops. They must weep as the bulldozers roar through their areas preparing to destroy the precious trees. They wander into the hospitals with at least twenty casualties from American firepower for one Vietcong-inflicted injury. So far we may have killed a million of them, mostly children.” And he warned that “a nation that continues year after year to spend more money on military defense than on programs of social uplift is approaching spiritual death.”

Today progressives like Bernie Sanders are arguing that “we need to cut our [swollen Trumpian] military budget by 10 percent and invest that money in human needs.”

In his Riverside Church speech, MLK also expressed a third important progressive idea--that our economic system needs major reform. Like the first Progressives, he believed our economy should serve the public good, not special interests. “We must,” he said, “rapidly begin the shift from a thing-oriented society to a person-oriented society. When machines and computers, profit motives and property rights, are considered more important than people, the giant triplets of racism, extreme materialism, and militarism are incapable of being conquered.”

In the year remaining of his short life, King worked most diligently on the Poor People’s Campaign, which aimed at pressuring the government and society to reform our economy, especially by reducing economic inequality. In his King biography, Oates writes that the “campaign was King’s ‘last, greatest dream’ because it sought ultimately to make capitalism reform itself, presumably with the power of redemptive love to win over economic oppressors, too, and heal antagonisms America must recognize.” Oates also mentions that MLK’s aims reflected the influence of theologian Walter “Rauschenbusch’s Social Gospel,” which, as Lepore noted, greatly influenced progressives of the 1890-1914 era.

King’s three important progressive ideas--racial justice, non-violence, and economic reform--are all as relevant today as they were in King’s day. But a fourth progressive idea, addressing climate change, was not in the 1960s perceived as an important problem. Yet, from all of MLK’s activities it is clear that if he were living today he would have been in the forefront of those insisting upon actions to confront human-caused climate change.

Today, more than a half-century after King’s death and in the midst of a terrible pandemic, the chances of enacting much of his progressive agenda seem better than ever. Just as progressive New-Deal reforms arose as a response to the Great Depression, so too today new progressive actions can emerge from our pandemic and national disgust with Trumpism. And these actions, as were King’s, will be strengthened if they proceed from a strong spiritual base.

In 2016, presidential candidate Bernie Sanders gave a talk in Rome entitled “The Urgency of a Moral Economy: Reflections on the 25th Anniversary of Centesimus Annus.” The anniversary he referred to was that of the release of a Pope John Paul II encyclical, and Sanders spoke before a conference of The Pontifical Academy of Social Sciences. He noted that the Catholic Church’s “social teachings, stretching back to the first modern encyclical about the industrial economy, Rerum Novarum in 1891, to Centesimus Annus, to Pope Francis’s inspiring [environmental] encyclical . . . have grappled with the challenges of the market economy. There are few places in modern thought that rival the depth and insight of the Church’s moral teachings on the market economy.”

Although Sanders was not successful in either his 2016 or 2020 run for the presidency, his progressive ideas, often based on spiritual values, have continued to animate the Democratic Party. In early July, a Biden-Sanders task force released proposals indicating Sanders’ continuing influence on the person now favored to become our next president.

Although not considered as progressive as Sanders, Biden’s background also suggests that he could further advance some of MLK’s progressive ideas. Biden’s popularity with black voters was a major reason for his securing the Democratic nomination, and he has said that his “two political heroes were MLK and Bobby Kennedy,” both assassinated when he was a senior in college.

As with King and Sanders, Biden’s views are strongly influenced by spiritual values. In a 2015 interview, he praised Pope Francis, saying “he’s the embodiment of Catholic social doctrine that I was raised with. The idea that everyone’s entitled to dignity, that the poor should be given special preference, that you have an obligation to reach out and be inclusive.“ On Francis’ encyclical on the environment and climate change, which many conservatives criticized, Biden said in the same interview, “The way I read it—and I read it—it was an invitation, almost a demand, that a dialogue begin internationally to deal with what is the single most consequential problem and issue facing humanity right now.”

After Franklin Roosevelt had been elected president in 1932, but before he had taken office in March 1933, Arthur Schlesinger, Jr. tells us a couple of “old Wilsonians . . . became so fearful of Roosevelt’s apparent conservatism” that they urged an FDR adviser to persuade “the President-elect to be more progressive.” Perhaps if Biden is elected, he will follow FDR’s example--not only succeeding an increasingly unpopular Republican president, but also pleasantly surprising progressives who thought him too conservative.

He has already surprised Bernie Sanders, who has been pleased with the results of the Biden-Sanders task force. In early July, on MSNBC, he stated, “I think the compromise that they came up with, if implemented, will make Biden the most progressive president since FDR.”