Lee Weiner was indicted in 1969 as part of the “Chicago 7,” charged with inciting riot at the 1968 Democratic National Convention. Before that he had been a community organizer in a desperately poor neighborhood in Chicago, and afterwards worked for progressive, social change non-profit organizations. His memoir, Conspiracy to Riot: The Life and Times of One of the Chicago 7 will be released by Belt Publishing on August 4. 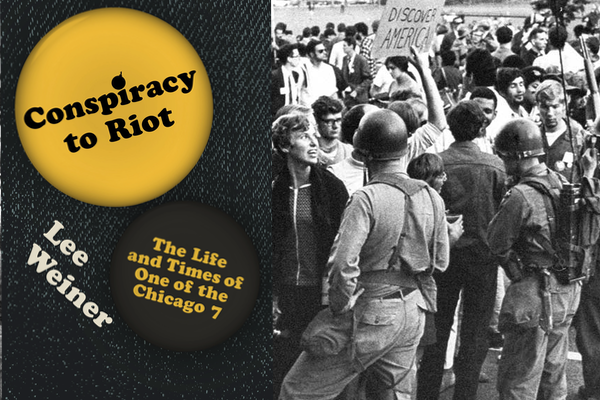 The defiantly unmasked, gun-toting crowds demanding an end to social distancing from state legislatures and governors in the early spring were loud and obnoxious. A little later, the chants one of my daughters joined in shouting out in New York City against the police murder of George Floyd were loud and necessary. The eruptive, massive and extraordinarily wide-spread demonstrations in cities and towns all across the country against systemic racism were louder still. And it’s possible that the convergence this year of the pandemic with a death toll approaching 150,000, the related economic breakdown, and the raging anger and social unrest on the streets might change America. Because it’s happened before, and not so long ago.

The years 1968, 1969, and 1970 were especially loud and did change America. In the midst of a horrendous war that killed and maimed Americans and Vietnamese seemingly without end, people were shouting and marching and sometimes fighting the police in the streets; there were burnings and looting, and music and long hair and all sorts of drugs seemed to be everywhere and threaten everything. People of color, uppity women, gays, lesbians, university students, the poor: all sorts of people said and did and demanded all sorts of things. And the government was trying its best to stop it all, to demonize and punish people - political and cultural dissidents - who claimed they only wanted to change the country into something better.

Those times accelerated a splitting of the country into different tribes. Perhaps the cultural split of the sixties was not as severe as the one between early white colonists and Native Americans that ultimately led to genocidal slaughter, or the divisions between the North and South that culminated in over 600,000 Civil War dead. But it was bad enough, and many of the same issues from the sixties feed today’s polarization – race, sexual identity and gender roles, economic inequality, war, a longing for a different and better country. If you want a quick and simple reminder of the sixties’ continuing impact, you can just look at the bumper stickers and emblems on people’s cars and realize you can easily figure out which side of that long-ago political and cultural split they are on, and what tribe they belong to now.

Another, if less direct way of noticing how the sixties are still helping shape today’s political struggles, is to note the birth years of the president, members of the Supreme Court, and the senior leadership of both parties in the House and Senate. More than 40 percent of them were born between 1939 and 1955, which would have put them between the ages of fifteen and thirty in those especially loud years of 1968, 1969, and 1970. And I think that would have made them particularly vulnerable to the cascade of exceptional images and events and noise of those years. Things like that are hard for people to forget and I don’t think it’s unreasonable to suspect that their experiences then have had some impact on the tone and direction of the political decisions they are making now. Everyone used to be certain the perspectives of the generations that experienced the Depression were shaped by those experiences. Why would 1968, 1969 and 1970 be any different?

Today, once again many people on the left side of a polarized America feel compelled to become more directly involved in political work in opposition to the dominant economic and cultural arrangements of our country. Some of the initial prompts—just like in the sixties—come from being assaulted by vivid media imagery and stories. Then it was newspaper and TV coverage of the black students sitting at segregated lunch counters acting bravely against racism and injustice, or blacks and whites together riding buses into dangerous southern cities. Now there are digital visions of neo-Nazis marching on the streets, chanting against immigrants, blacks, and Jews, video of police violence and murder, and pictures of crying, angry parents mourning the death of their child killed by a police officer for no understandable reason.

Often far more quickly than I and many of my friends learned so long ago, people have understood that engaging in politics is what is required to stop some of the ugliness and suffering. In part, that’s because seeing that “politics” directly impacts peoples’ lives is easier now. Most media coverage of political news in the fifties and early sixties was almost benign, and certainly never cruel or savage. But today’s often ferocious Republican and Democratic tribal splitting can make it impossible not to see “politics” as an all too visible, divisive force in America. And because of all that noise, and because the images people see of hurt and pain and cruelty offends their sense of what America should be, many people feel compelled to choose a side and act.

The “Resistance” in today’s political tribal divisions most directly and broadly reflects the values, hopes, and commitments that helped define the dissident politics of the sixties: a belief in the essential worth of other people, and that personally engaging in political activity is required to meet your obligations to others and to make America a fairer, more just, and better place. The newer, broad dissident movement even echoes some of the internal conflicts and overlapping strategies of those older times, with arguments about the legitimacy, priority, and importance of local issue organizing, electoral politics, peaceful mass protest, and righteous violence.

When the viral plague finally begins to truly fade away, restaurants and city street life as it all used to be will take a while to come back, if ever. But the brutal tribal politics of “us” against “them” looks almost certain to continue. And the renewed assault by leftist political dissidents on a long-established dominant racist and sexist culture and inequitable wealth distribution will need to be strengthened. I believe and hope that will happen. But for it to work, there will need to be a better balancing between the particularistic aspirations and hopes and goals of all the different groups of dissident activists, far better than we ever achieved in the sixties.

In my old world, the unbridged differences between otherwise allies – people of different colors, cultures, genders, classes, sexual identities, and competing claims on priorities for action, all swirling underneath crushing waves of unrelenting government repression, first destroyed individuals among us, and finally, us. Far better than we ever did, people now are, as they must, working together, acting and moving forward together, while constructing ways to live daily lives and still be fully engaged politically. Otherwise the conflicts between tribes we see now could strengthen into something even more horrible and threatening to our country’s core values of tolerance, freedom and democracy.