The Great Upheaval of 1877 Sheds Light on Today’s Protests

Richard Schneirov is Professor Emeritus at Indiana State University in Terre Haute.  He is the author (with John B. Jentz) of Chicago in the Age of Capital: Class, Politics, and Democracy during the Civil War and Reconstruction (Urbana: University of Illinois Press, 2012). 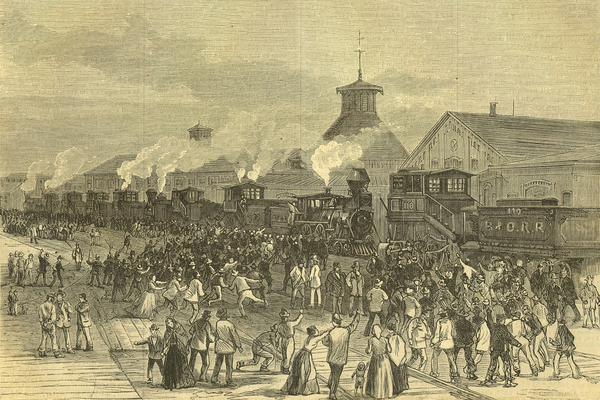 One hundred and forty-three years ago the nation was shaken by a nationwide series of strikes almost amounting to a mass rebellion. Though there are clear and obvious differences between the issues, modes of collective action, and the participants of that upheaval and the multiracial protests of African-Americans, other people of color, and their white allies that have occurred over the past two weeks, the similarities are real enough to offer some perspective on present circumstances.

The issue that started the 1877 affair was not police brutality and institutional racism but economic inequality. The year 1877 was the low point of the 1873-1878 depression, which brought wage cuts of 10 to 30 percent, driving many workers and their families to the point of desperation. The strikes began when railroad workers in Martinsburg, West Virginia walked off the job following a 10 percent cut on the Baltimore & Ohio Railroad. The strike spread west and soon engulfed transportation centers and major industrial cities including Pittsburgh, St. Louis, and Chicago.

But, like the rallies and marches against the murder of George Floyd, what started out as a protest quickly escalated beyond the control of those who sought to lead it. It devolved into heterogeneous crowds with their own dynamics, sometimes resulting in violent clashes with authorities and property damage.

In Pittsburgh, after it became clear that the Pittsburgh police and militia sympathized with the local crowds, authorities called in the militia from Philadelphia, sparking outrage and violence. After the outsiders fired on the protesters causing twenty deaths, a diverse crowd tried to burn down the round house into which the militia had fled and then burned and looted the rail yards.

In Chicago the railroad strike quickly escalated into a general strike for a 20 percent wage increase and the eight-hour day.  Mobile crowds of various occupations (or no occupation at all) traversed the industrial districts calling out employees to strike. To most of the press, they were lawless mobs--“ragamuffins, vagrants, and saloon bummers.” But a more accurate description was that they were “roaming committees of strikers” often joined by passersby and teenage boys out for adventure.  The press’s conflation of protesters expressing  serious social grievances with these hangers-on encouraged much of the public to dismiss the whole affair as a “riot.”

After the first day, male crowd members were joined by working class women with their dresses tucked up, sometimes carrying stockings filled with stones to use as weapons. When they were confronted by police and militia the results were bloody and tragic.  Despite the brutality of the police in the present protests, the forces of order in 1877 were far more merciless in suppressing the strikes and disorder. In Chicago, at least thirty working people lay dead after four days of clashes with police.  In New York, where those in authority acted on advice akin to Donald Trump’s call to “dominate” protesters, there were no strikes after police brutally attacked and dispersed a mass meeting on the first day of the strike.

Who were these crowd participants of 1877?  Though few African-Americans lived in northern industrial areas, in places where significant numbers of black people lived, notably Cincinnati, St. Louis, and Louisville, they participated in the upheaval with alacrity.  But the largest portion of strikers in the industrial cities were white immigrants, mostly Irish, German, Bohemian (Czech), and Scandinavian.  These men and women were at the bottom of the class and status orders of the new industrial society then taking shape in the urban North.  They were acutely conscious of themselves as a group set apart from respectable society, “looked down upon and despised” as one young striker put it.

The anger they displayed at the police and militia closely parallels that of today’s protesters. In Chicago, Irish crowd members called the police “peelers,” a term of derision imported from Ireland, where the constabulary of Sir Robert Peel had enforced British dictates on the colonized Irish.  While police brutality was not an issue raised by the strikes, it did become a major issue afterward. In Chicago, a new mayor was elected in 1879 having explicitly promised to limit the use of the police to suppress strikes and break up the gatherings of Socialists. In New York, where the police were staunchly backed by leading businessmen then in control of city government, they ran rampant over the labor movement, making their brutality a major issue in the labor party’s Henry George campaign of 1886. In 1890, the unions of the city’s construction workers charged that the city’s police force “as a body is dishonest, brutal, even criminal.”

There is much we can learn from recalling the 1877 strikes. Throughout American history, white immigrant and native-born working people as well as black people have found it necessary to mount unorganized, spontaneous nationwide protests and have faced off against the police in angry, sometimes bloody encounters. During these episodes, the news media has seized on instances of rioting and opportunistic looting to dismiss the substantive demands of protesters.

And then as well as now, indiscriminate police violence in dealing with protests has elevated the issue of police accountability into a major political issue.