Brooks Marmon is a PhD student at the Centre of African Studies at the University of Edinburgh. He is wrapping up a doctorate on pan-Africanism and decolonisation in Southern Rhodesia in the 1950s and 60s. 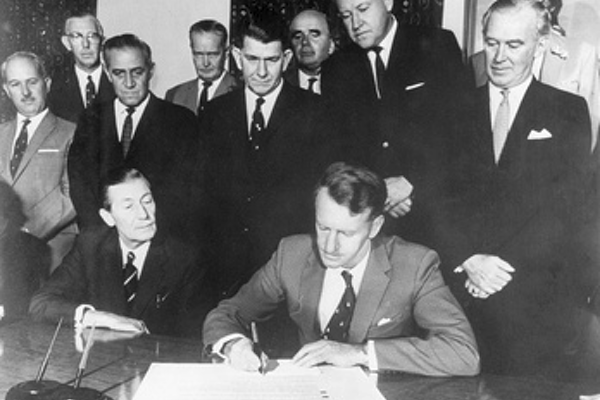 Donald Trump has announced further immigration restrictions as a result of the public health emergency caused by COVID-19. The measures call for a temporary pause in the issue of green cards (permanent residency status) to individuals outside of the US. While the April 22 executive order does not go as far as many Trump supporters would have liked, it marks another gesture toward the consolidation of the protectionist, isolationist USA that Donald Trump has called for.

Trump has repeatedly expressed a desire to reduce foreign immigration. He infamously campaigned on the promise of building a wall on the Mexican border. Approaching his first anniversary in office, at an Oval Office meeting with lawmakers, Trump reportedly disparaged Haiti and African nations and pined for immigration from western European countries like Norway. At the beginning of this year, Trump moved to bar immigration from the most populous African country, Nigeria.

The Trump administration rejects charges of racist motivations underpinning these calls for curbs on immigration. However, its rhetoric and actions are firmly aligned with the anachronistic former white settler regimes in southern Africa.

Decades before Trump announced an ‘America First’ policy, right-wing politicians in the British colony of Southern Rhodesia (colonial Zimbabwe) agitated for ‘Rhodesia First.’ As African decolonization gathered pace following the independence of Ghana in 1957, the colonial leaders of Rhodesia flailed about, seeking measures to assuage a white electorate perturbed by drastic political upheaval.

Promises to control black immigration formed a key component of this effort. Although often overlooked in favour of South Africa, its southernmost neighbour, Rhodesia was a regional powerhouse, attracting hundreds of thousands of African immigrants from across the subregion. Most of the colony’s white leaders (representing a population of about 200,000 whites) were themselves immigrants, hailing from the UK or South Africa. They were unnerved by the colony’s unequal racial demographics and sought to flatten racial disparities.

Alongside efforts to attract white immigrants of British extraction, Rhodesia’s rulers devoted considerable attention to keeping black foreigners out of the colony. In early 1959, the colony moved to bar new black immigrants from taking up jobs in Salisbury, the capital, and Bulawayo, the second city. This gesture came weeks after the monumental All-African Peoples’ Congress in Accra, Ghana, a major pan-African gathering, set the Rhodesian authorities on edge. In 1962, on the eve of an election campaign, the incumbent Prime Minister, Edgar Whitehead, floated the more stringent possibility of expelling all foreign migrant labourers from the colony. He believed that such a measure was necessary in the face of high unemployment amidst black Rhodesians.

Three years later, Southern Rhodesia entered a full-blown crisis when it unilaterally declared its independence from the United Kingdom. Although Rhodesia’s independence proclamation was modelled on the American Declaration of Independence, the renegade colony was a pariah state and never gained international recognition. In a broadcast announcing the manoeuvre, Rhodesian Prime Minister Ian Smith, one of southern Africa’s most notorious white rulers, noted that any attempts to economically sanction Rhodesia would first redound to the detriment of foreign African labourers residing in the colony.

Like Trump, Smith blustered and shifted blame onto others: “...if our economy should contract as the result of such actions taken by others then what jobs were available would have to be reserved for our own Africans, thus bringing hardship not only on our own people but on those from adjoining territories who works here.” He disingenuously maintained that Rhodesia held “nothing but goodwill and the best of intentions” toward Africa, unconvincing sentiments that Trump surrogates have also espoused.

Smith’s aspirations of wider African friendship were resoundingly crushed by pan-African solidarity. Rhodesia’s neighbours banded together to form the Frontline States, an alliance that supported military efforts to oust the white government. The Organisation of African Unity also supported the overthrow of the minority government via armed struggle.

Media censorship skyrocketed amidst a state of emergency and the Rhodesian economy gradually deteriorated in the face of comprehensive international sanctions. Within a decade, support from the territory’s greatest ally, Apartheid South Africa, sagged as Rhodesia’s fate became clear. In the late 1970s thousands of once intransigent whites ‘took the gap’ and fled the colony, seeking greater security elsewhere. White rule collapsed under the pressure of international sanctions and guerrilla warfare. Zimbabwe became independent in 1980 and subsequently endured nearly 40 years of Robert Mugabe’s leadership.

Like Smith, Trump has also asserted an economic rationale behind his restrictions, stating, "it would be wrong and unjust for Americans laid off by the [Corona] virus to be replaced with new immigrant labor flown in from abroad. We must first take care of the American worker.”  Peculiarly, Trump has even managed to mimic Smith’s penchant for insurrection by urging the ‘liberation’ of several states with Democratic governors.

Just as protectionism dominates Trump’s agenda, it was similarly at the heart of Rhodesian efforts to resist the ‘wind of change’ and preserve the economy by maintaining ‘civilised standards.’ Trump’s rhetoric and actions mirrors those of Rhodesia’s rulers who fought in vain to avert an overwhelming tide. It is unlikely that Trump himself is cognisant of these similarities. It might, however, be helpful for the country if the President and his supporters knew more about the fate of the ideological company they keep.