Do We Want the Progressive Sanders or the Pragmatist Biden? 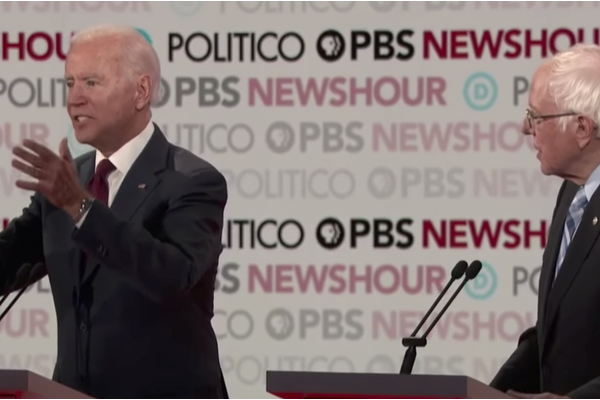 Since my state’s presidential primary in Michigan was on March 10, it was time to make a choice. The only realistic and sensible one was between Bernie Sanders and Joe Biden. They may be two old white guys, but no other candidates remained who had any chance of defeating another old white guy who happens to be one of our worst presidents ever.

There’s a lot to like about the progressive Sanders, including his realization of how serious our climate crisis is. But Biden is also “a solid contender on climate and environment.” As Robert Dallek has noted, Franklin Roosevelt (FDR) was both a progressive and a pragmatist. And the ideal 2020 Democratic presidential candidate would be both, but there is no denying that by historical standards Sanders is more progressive and Biden more pragmatic. So which should one choose?

I recommend using history and the need for political wisdom as a guide. First, let’s look at the changing meaning of the term progressivism. The Progressive Era (1890-1914) was a diverse movement to assert and protect a public interest, both economic and social, against unfettered capitalism. It did not attempt to overthrow or replace capitalism, but to have government bodies and laws constrain and supplement it in order to insure that it served the public good.

Progressive reforms included passing laws improving sanitation, education, food and drug safety, housing, and workers’ rights and conditions, especially for women and children. Progressive efforts also helped create the National Park Service and a graduated federal income tax (16th Amendment). In addition, they reduced corruption in city governments, limited trusts and monopolies, expanded public services, and worked to aid the poor and secure the vote for women, which was not achieved in presidential elections until 1920.

Importantly for our discussion, progressivism was a broad coalition that included both the bellicose Republican (and president from 1901 to early 1909) Theodore Roosevelt and the likes of Jane Addams, a radical reformer and pacifist. It was Addams’s pragmatism that led her to shun political labels and seek alliances to advance social progress.

The 1920 presidential election brought the Republican Warren Harding to office, and for the next twelve years it was held by Republicans, but then the progressive, pragmatic Democrat Franklin Roosevelt (FDR) came to office and remained there until his death in 1945.

I have described progressive values as similar to the values of political wisdom. They included the proper mix of realism and idealism, love, compassion, empathy, self-discipline, passion, courage, persistence, peace, optimism, humility, tolerance, humor, creativity, and an appreciation for beauty and the need to compromise.

Like progressivism, pragmatism has a rich tradition in the USA. Walter Isaacson wrote that while popular opinion of the founders emphasizes high principle, deliberation on the Constitution in 1787 “showed that they were also something just as great and often more difficult to be: compromisers.” Isaacson also stated that for Franklin “compromise was not only a practical approach but a moral one. Tolerance, humility and a respect for others required it…. Compromisers may not make great heroes, but they do make great democracies.”

Recent Democratic presidents—Truman, JFK, Lyndon Johnson, Jimmy Carter, Bill Clinton, Barack Obama—have embodied this pragmatic impulse. As former President Bill Clinton said, “This is a practical country. We have ideals. We have philosophies. But the problem with any ideology is that it gives the answer before you look at the evidence.” And historian James Kloppenberg has emphasized the centrality of pragmatism to Obama’s politics. This type of pragmatism “challenges the claims of absolutists--whether their dogmas are rooted in science or religion--and instead embraces uncertainty, provisionally, and the continuous testing of hypotheses through experimentation," in order to see what works.

Thus, both progressivism and pragmatism can claim to be authentically American approaches, but where does that leave us regarding the Sanders/Biden choice? Has Sanders demonstrated enough pragmatism? Unfortunately, I do not think so. The political-wisdom qualities of compassion, empathy, passion, courage, persistence, and love of peace are certainly there. But the proper mix of realism and idealism, creativity, humility, tolerance, and a willingness to compromise--not so much.

By sticking too closely to an ideological democratic-socialist message, Sanders has failed to display the creativity that historian R. B. Bernstein (in his The Founding Fathers Reconsidered) wrote of regarding those men, as well as FDR and his supporters who “reinterpreted the Constitution’s origins, stressing the founding fathers’ creative experimentation, which they sought to foster in the new nation.”

Regarding humility, tolerance, and a willingness to compromise, they all go together. Humility should tell us not to be dogmatic, that we do not have all the answers. We should tolerate the views of others not only for reasons of love, compassion, and empathy, but also because we might learn something from different views. Compromise implies both humility and tolerance, plus the realization that to achieve the common good in a democratic society compromises will often be necessary.

Sanders has stressed a we-versus-they approach. In a speech after Super Tuesday he made it clear--as he often has--who are on the two sides. The “we” includes those  “who in many cases are working longer hours for lower wages . . . people who have not traditionally been involved in the political process.”Also many of those favoring his Medicare-for-All plan, those suffering from a “dysfunctional and cruel healthcare system in which we are spending twice as much per person on healthcare as are the people of any other country and yet we have 87 million Americans who are uninsured, underinsured.” Not specifically mentioned, but a big part of the “we” are millions of young people, many of whom would benefit from the free college tuition and canceling of “all student loan debt” that Bernie’s web site indicates.

Among the “they” are the “corporate establishment” and the “political establishment,” as well as “Wall Street and the drug companies and the insurance companies and the fossil fuel industry and the military industrial complex and the prison industrial complex, and most of the 1%.” Not mentioned are all those who voted for Trump in 2016, including a majority of Protestant and Catholic voters, and still hold views contrary to Bernie’s.

Bernie’s approach is not a unifying one, not one that says, “Let’s reason together and see what we can achieve for the common good.” However enlightened his ideas might be in theory--and I think many of them are noble--a majority of U.S. citizens and their politically diverse legislators are not yet ready to back them. He advocates, in his own words, “a political revolution,” and revolutions are more divisive than unifying--think of the civil war that followed the Russian revolution. Biden insists that voters “aren't looking for revolution, they're looking for results." And the primary results heretofore (through Mar. 10) bear him out.

In essays of 2012 and 2015 about Obama’s pragmatism vs. Republican dogmatism I criticized Republicans for not being open enough to policies that might further the common good. Bernie’s supporters in 2020 tend to be more ideological and less pragmatic than other Democratic primary voters, and the danger is real that if Bernie is not the Democratic nominee many of them might not vote for whoever is. But they should think twice.

Biden is not yet that nominee. Things could still change. A poor Biden debate performance. Stunning upsets in some big yet-to-vote states. Unknown political effects of the coronavirus. Who knows? But one thing is certain. Our country needs a president that is more progressive and pragmatic than Trump, who is neither, but only an unprincipled opportunist. Either Biden or Sanders would be better than Trump, and Democrats need to rally around whoever it is. But because his pragmatic style matches more the American tradition, Biden has a better chance of unifying our nation and delivering positive long-range results. An enlightened vote is one that considers the common good, not just that of those who think like us.