Why and How Donald Trump Flunks the Presidential Leadership Test

Walter G. Moss is a professor emeritus of history at Eastern Michigan University and Contributing Editor of HNN. Among his publications are An Age of Progress? Clashing Twentieth-Century Global Forces, various volumes on Russian history, and over 200 essays. 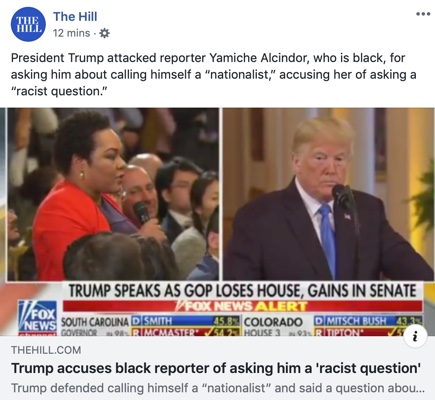 Now that the midterm elections are over there will be some reassessments of President Donald Trump. But whatever the verdict on his appeal to supporters or as a campaigner, he remains a failure as the leader of our country.

After he had completed almost a full year as president, 155 presidential scholars concluded that overall he had earned an “F” grade on their Presidential Greatness Survey. In addition to assigning him a general grade, the scholars also graded him on his legislative accomplishments, communicating with the public, foreign policy leadership, and embodying institutional norms. For the first two areas they gave him a “D”; for the last two, an “F.” A slightly larger group of scholars listed him as the worst and most polarizing of our 44 presidents.

Shortly before the above survey appeared, one of the most prominent historians of our presidents, Robert Dallek, stated that “it is clear Trump is unfit to serve,” and lawmakers should “invoke the 25th Amendment” to remove him from office. Dallek has written books about Franklin Roosevelt, Truman, Nixon, Kennedy, Lyndon Johnson, and Reagan. Another leading historian and author of a new book on U.S. presidents at war, Michael Beschloss, recently declared that because Trump lacks historical knowledge, empathy, and self-restraint, and “will grab for as much power as is available,” he is a more dangerous man to have in the White House than the previous presidents Beschloss has studied.

Of course, many Trump supporters might reply, “What can you expect from a group of eggheads?” Actually, the survey group mentioned above was the “Presidents & Executive Politics Section” of the American Political Science Association, which is listed as “the foremost organization of social science experts in presidential politics.” But the anti-intellectualism of Trump and many of his followers is well known, and is often stoked by Fox News and its ilk. And railing against academics or scientists does not invalidate their expertise. “Maybe so,” a Trump supporter might respond, “but how about their biases?”

True, historians, political and other social scientists, and natural scientists (including many who emphasize that human-caused climate change is a major danger) all have their biases. But central to their disciplines is the goal of truth-seeking and objectivity—which cannot be said for ideologues or political extremists—and academics and other experts, especially those in the natural sciences, are not uniformly liberal or progressive. For example, among the 155 scholars who assigned Trump an “F,” 41 percent described themselves as moderate or conservative. The moderates gave Trump an “F,” while the conservatives were more generous, assigning him a “D.” In addition, the scholars who ranked the presidents also listed the conservative Ronald Reagan as our ninth best one.

The Presidential Greatness Survey was completed in January 2018. Has President Trump done anything since then that would lead historians to raise his grade? After all, in September he claimed in a United Nations speech, “In less than two years, my administration has accomplished more than almost any administration in the history of our country. . . . so true.”

At about the same time, the White House posted a list of 52 Trump Administration accomplishments, many of them coming since January 2018. They dealt mainly with economic gains, including a tax cut; eliminating regulations, many relating to the environment; appointing more conservative judges; new foreign policy initiatives, such as renegotiating NAFTA, imposing new tariffs, and withdrawing from what Trump considered a “horrible, one-sided Iran Deal”; and toughening immigration policies, which includes the dubious claim of beginning a wall on the U.S.-Mexican border.

The main problem with the Trumpian list is that most of the “accomplishments” come with a heavy cost that the White House ignores.

Economic gains and tax cut? True, the unemployment rate has dropped from 4.7 to 3.7 percent since Trump took office, but he inherited an economy from President Obama that had racked up 75 straight months of job growth and reduced unemployment by more than 3 percent (7.8 to 4.7). Regarding the tax cut, it is skewed toward the wealthy and increases the federal deficit, which jumped almost 17 percent in fiscal 2018 as opposed to a year earlier. The great harm of this escalating deficit, like Trump’s climate policies, may now be ignored by many, but will wreak its woe in the future.

Eliminating regulations? The cutback on government regulations, especially regarding environmental protections, is already having negative consequences and is likely to have even more dire ones in days to come.

Appointing more conservative judges? An “accomplishment” only for conservatives, not for a majority of our citizens who are not on that side of the partisan divide.

New foreign policy initiatives? Many of these Trumpian actions, like withdrawing from the Iran nuclear deal and imposing new tariffs on foreign products, are considered backward steps by various experts. (The same can be said for the more recent announcement of the U.S. intention to withdraw from the Reagan-Gorbachev 1987 Intermediate-Range Nuclear Forces Treaty.)

Toughening immigration policies, including initiatives to build a border wall? Trump’s latest assertion that he intends to end the policy of automatic citizenship for children of undocumented immigrants and his comments about a caravan of migrants moving closer to the U.S.-Mexican border – “it almost looks like an invasion. . . . It really does look like an invasion”— along with his plan to send U.S. troops to the border, continue his fearmongering rhetoric about our immigration policies allowing in too many terrorists, rapists, and killers. As retired General and former Secretary of State Colin Powell said about the dispatch of troops, there was “no threat requiring this kind of deployment.”

Nevertheless, as Andrew Sullivan noted in October, “Trump’s record as a force of destruction is profound, whether it be the sabotage of Obamacare, the devastation of democratic norms, or the rattling of NATO,” and “he has also shifted the entire polity more decisively toward the authoritarian style of government. In this respect, yes, the Trump administration has indeed accomplished much more than many of us want to believe.”

Despite, or because of, what Trump has so far accomplished in 2018, we are still left with the question, Does his leadership (or lack thereof) still deserve an “F.”One presidential historian that seems to suggest the answer is still “Yes” is Doris Kearns Goodwin. She has written extensively about presidents such as Abraham Lincoln, Theodore Roosevelt, Franklin Roosevelt, and Lyndon Johnson. Her most recent book, Leadership: In Turbulent Times, also focuses on these four presidents.

In an October 2018 interview she suggested that Trump fails as a leader because, unlike him, a “leader normally takes blame when things are wrong,” “shares credit when things are right,” “controls his negative emotions,” “communicates honestly and with truth,” and surrounds himself with “a team that’s built with people who are strong-minded and can argue with him.” Rather than rejoicing in working with others to solve difficult political problems, Trump mainly seems most animated “when he’s arguing with other people and calling them names.”

In her leadership book, she writes that the four presidents she focuses on were “at their formidable best, when guided by a sense of moral purpose, they were able to channel their ambitions and summon their talents to enlarge the opportunities and lives of others.”

Relating to “moral purpose,” one review of her book cites her quote from Theodore Roosevelt that democracy can succeed only when there is “the fellow feeling, mutual respect, the sense of common duties and common interests, which arise when men take the trouble to understand one another, and to associate for a common purpose.”

The review also notes that the book emphasizes Lincoln’s “emotional intelligence, his empathy, humility, consistency, self-awareness, self-discipline, and generosity of spirit" as well as his “sensitivity, patience, prudence. . . tenderness and kindness.” “Is leadership possible,” Goodwin asks, “without a purpose larger than personal ambition . . . [and] guided by a sense of moral purpose?” The reviewer believes that even though Kearns never mentions Trump in her book, she strongly suggests that “in temperament and democratic vision and values, Trump is the anti-Lincoln.”

Decades before Kearn’s book on leadership appeared, another presidential historian, FDR biographer James MacGregor Burns, had written on the topic. For presidential leadership, he also emphasized the importance of values and moral purpose: “Hierarchies of values . . . undergird the dynamics of leadership.” In discussing FDR, he wrote, “It was because Roosevelt’s fundamental values were deeply humane and democratic that he was able, despite his earlier compromises and evasions, to act [against Hitler] when action was imperative.” Such leadership reflects “considerations of purpose or value that may lie beyond calculations of personal advancement.”

Still another historian, Ronald Feinman, who in 2018 wrote about 14 presidents who have demonstrated moral courage, has stated that “the most significant factor” in rating presidents’ greatness “is when they demonstrate moral courage on major issues that affect the long term future.” He believes that President Trump “has no ability within his own narcissistic, self-serving personality, to be anything like these Presidents.”

In an essay earlier this year, I also emphasized the importance of values and moral purpose and contended that Trump has no moral compass. Many of Trump’s evangelical supporters may think that his stance on questions like abortion indicate his moral sympathies, but given his history on the issue, it is difficult to conclude that such sympathies mattered more than political opportunism.

Given the insights of Goodwin and others on presidential leadership, especially regarding “moral purpose,” Trump’s “F” for 2017 should not now be upgraded. In fact, as the midterm elections got closer, Trump’s moral failures worsened. For example, he ramped up his lying and his fearmongering regarding illegal immigrants. (Washington Post headline, October 22, 2018: “Trump, said 83 untrue things in a single day.”)

As to the future, change is always possible. (Feinman mentions Ronald Reagan, “who after strong anti-Communist rhetoric, moved to end the Cold War by negotiating with Soviet leader Mikhail Gorbachev in the late 1980s.”) Since Trump’s egotism is much more anchored than any solid moral beliefs he may have, any change that he thinks might resound to his glory cannot be ruled out. (Remember that when asked by a reporter if he thought he should win the Nobel Peace Prize, he replied, “Everyone thinks so, but I would never say it.”)

With the Democrats now in charge of the House of Representatives, Trump may be inclined to demonstrate that his July-2018 words—“I’m different than other [presidents]. I’m a dealmaker. I’ve made deals all my life. I do really well. I make great deals”—are not just hollow rhetoric. But compromising with Democrats and advancing legislation for the common good perhaps implies more humility than he can muster. Plus, other roadblocks to bipartisanship exist. Regarding the chances of Trump becoming a wiser and less polarizing president, the words that most come to mind are those of the poet W. H. Auden, who in a different context once wrote: “Is it likely? No.”