Covering the Troubles in Northern Ireland

Ron Steinman spent 35 years at NBC. He was NBC’s Bureau Chief in Saigon during the Vietnam War. In 1975 he joined the Today Show, spending 11 years as a senior producer in Washington and New York, including covering politics and overseeing production of the Today Show’s live special weeklong broadcasts from China, Moscow, Seoul, Vietnam and overseas presidential trips. He is the author of Death in Saigon, a murder mystery set in Saigon during the war. His latest book is "My Commonplace Book." Steinman won a Peabody Award, a National Press Club award, two American Women in Radio & Television Awards, and has five Emmy nominations. 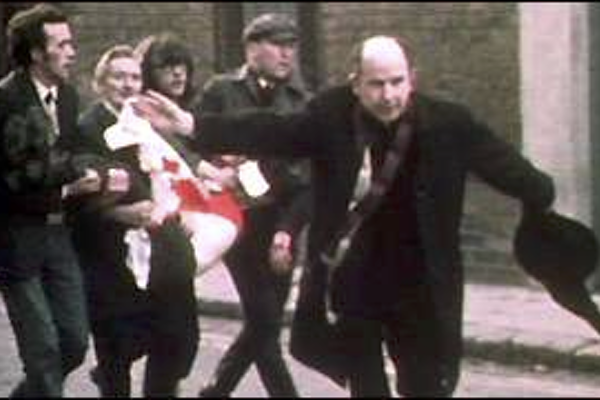 As the summer of 1969 began, I was looking forward to a less intense job post. I had spent the past few years running the NBC News Saigon bureau, serving as South East Asia bureau chief in Hong Kong, and covering the Vietnam War. My thoughts of a gentlemanly tour in London quickly ended once the Troubles started. Although I didn’t know it yet, the Troubles would dominate my role as bureau chief in London for the next four years.

The Troubles were a physical, social and intellectual explosion in Northern Ireland against the British government that began in 1968 and continued for more than three decades. For many in Northern Ireland, mainly those who were Catholic, the Troubles were nothing more than a continuation of what had been festering for 800 years. Northern Ireland, the territory of Ulster, was owned, operated and dominated by the aristocracy. Protestants ruled and Catholics felt suppressed. The Catholic minority wanted its independence from Great Britain and to merge with the Republic of Ireland to the south. That would never happen as long as the British government ruled.

The Troubles started with a fury in 1968 at a civil rights protest march in Londonderry when the Royal Ulster Constabulary broke up the march using truncheons and water cannon for reasons still unclear. Then, in August 1969, the Troubles kicked into high gear with the two-day Battle of the Bogside, also in Derry (Londonderry). The demonstrations quickly spread to Belfast and throughout Northern Ireland. The Irish Republican Army (IRA) led a well-organized and fierce guerilla group in the charge for freedom. In over three decades of conflict, more than 3000 died, 30,000 were wounded, and untold millions suffered psychic scars that remain to this day.

I covered the Troubles in Northern Ireland for NBC News for four years, from the summer of 1969 until 1973. Even as a journalist with significant experience covering conflict, I knew I was in for a new ride. Because we now live in an era of transparency about how the press covers news, I thought I would take you inside how I and other journalists approached covering The Troubles.

After quickly settling into my new job as a producer and bureau chief based in London, I was soon making frequent trips to Northern Ireland and to the Republic of Ireland, especially Dublin. When I drove across the closed and heavily guarded border that separated the two entities, my camera crew and I underwent long delays, passport checks, and searches of our car for weapons or contraband. We suffered harassment but we were journalists in a high intensity situation, and we expected nothing less.

My team consisted of a cameraman, a soundman, a correspondent and myself as field producer. We were witnesses to what seemed to be never-ending riots between the British troops who fired rubber bullets and tear gas and the disaffected crowds of anti-British Catholic protestors who threw paving stones.

Even back then, the press was not welcome by anyone.  We knew we were in danger the moment we stepped into the path of marching Northern Irish, whether Protestant or Catholic, and the heavily armed military and police.  Sometimes to keep safe we would run down narrow back alleys to escape the rock-tossing demonstrators. Add to the rocks the British troops wielding batons and firing rubber bullets at whoever stood in their path and life on the streets was, to put it mildly, difficult. We learned not to be in the way of the demonstrators' anger or the retaliating British troops or police. Their wrath only added to our fear.

My job was to get the story, make it understandable and palatable for our American audience, and to show the continuing riots in all their ugliness. My problem was, how do I cover that kind of story when the thirst in America was for riots rather than analysis. We did not want to dignify or glorify what took place in the streets.

I recall the many faces, the armed and frightened, often brutish, very young British troops, some of whom barely had started shaving clad in their all-weather khaki colored wool uniforms. Alongside them stood the blue- clad R.U.C., the Royal Ulster Constabulary, the police arm of the Protestant Unionist government, generally anti-Catholic and always anti-IRA, its sworn enemy. With them were the B-Specials, an even more select and tougher arm of the Ulster government, if you could identify them, which was difficult because they wore civilian clothing.

In Belfast and other cities, the clash of philosophy, ideals, and plain hatred made for frequent demonstrations against the British troops. Those fierce clashes with the pounding of metal garbage can covers were sounds of support by mothers, daughters and grandmothers outside their homes. Throwing cobblestones, paving stones, bricks, rocks, and any weapon they could find happened quickly and ended just as fast. Many demonstrators were young and out of work, disenfranchised by any standard.

The riots were frequently bloody. Often the same age as the British troops the rioters confronted, they were difficult to contain when let loose on the street. Because they felt they had no future, they usually rioted with abandon. Some rioters used what the British called petrol bombs, a quart bottle filled with gasoline, a wick at the top and, after lighting it, throwing it and watching it explode, often injuring as many as possible, especially if they were wearing a uniform.

Truth is that it was difficult to be sympathetic toward any of the players, though that is not what an objective journalist should feel. Each, the IRA who wanted the British out, the Protestant Union/loyalists who wanted to dominate life in Northern Ireland, the R.U.C and the British troops were hardcore in their own way. This does not include the average person raising a family, going to work in a weak economy trying to survive under difficult conditions. Fanaticism was the rule. I learned not to argue with anyone. I could not agree with violent tactics on any side. I did agree that oppression by the British government had been too long the norm in Northern Ireland, and it was time for those people to be free of British rule.

I witnessed the aftermath of bombings in the streets and in pubs. I talked to politicians, the police and the military and civilians. I often traveled to Dublin over the then heavily guarded border for interviews with underground IRA officials to whom we could not speak in the north. But we never told enough stories about how life was different in the Republic of Ireland though I was never sure how effective those stories were whenever we did.

The Troubles is one of the stories I covered that does not go away. For different reasons, along with Vietnam, its imprint is with me always. The British and the IRA ended the Troubles after years of negotiation, on Good Friday in 1998. Called  "The Good Friday Agreement," the hope was there would be no more terror. No more bombings, No more killings. No more deaths. Peace had a chance. Importantly, the border between Northern Ireland and the Irish Republic would be open, allowing people, goods and services to cross freely, aiding the economy and the new social compact. I sighed with relief. The people deserved their new reality.

With Brexit now on its way, its implementation must include the pledge that there will be no hard border between Northern Ireland and Ireland. If not, it could be a threat to the nearly twenty years of that convenient, open border with stability between north and south at risk. The people will suffer. It would not take much to resurrect a Troubles for the 21st Century if the architects of Brexit do not intelligently address the border between the two Irelands.

But for me, it was over. After four years of intense coverage of the story, with the smell of tear gas forever implanted in my nostrils, I departed London for a new assignment, never to return to Northern Ireland.