75 Years After the Dresden Bombings

Sinclair McKay is the bestselling author of The Secret Lives of Codebreakers and The Secret Listeners for Aurum, as well as several other books. Sinclair is a literary critic for the Telegraphand The Spectatorand for three years was a judge of the Encore Prize, awarded annually for best second novel. He lives in the shadow of Canary Wharf in east London. His new book, The Fire and The Darkness: The Bombing of Dresden, 1945, was published by St. Martin’s Press on February 4, 2020. 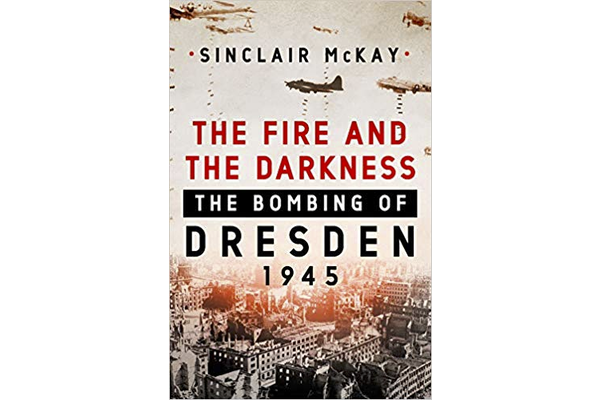 Every year on February 13th, in the cold of the late evening, all the church bells in Dresden ring out at a pre-determined moment; and onlookers in winter coats gather in the old squares to light candles. The bells – their chaotic clamour echoing through the streets for twenty minutes – represent air raid alarms. Standing amid the crowds, I found my gaze drawn up into the dark sky, envisaging the approaching bombers; imagining the dazzling green and red of their initial marker flares falling through the dark. In 1945, the children of Dresden thought these were like ‘Christmas trees’.

History in this city is not an abstract academic pursuit; instead, it is palpable and passionate. It matters enormously. This year marks the 75th anniversary of the horror that made Dresden – deep in eastern Germany - a by-word for annihilation. Before the war, Dresden had been known as ‘Florence on the Elbe’, because of its rich array of baroque architecture, its beautiful churches, galleries and opera house, and its strong tradition of art. Surrounded by gentle hills and rocky plains, Dresden always seemed a step apart. Even when it fell under the obscene thrall of Nazism.

Throughout the war, Allied bombers had raised infernos in cities all over Germany; but few in Dresden imagined that the British and Americans could turn upon the city in which – pre-war – they had visited and loved in such numbers. Dresdeners were mistaken.

On the night of February 13th 1945, 796 British bombers, their flights staggered over a calculated two waves from 10 PM to 1 AM, unleashed thousands of incendiaries and high explosives that in turn created a super-heated firestorm that killed 25,000 people and reduced the old city to glowing, seething rubble. According to one on-looker, the assault ‘opened the gates of hell’. Women, children and refugees, huddled in inadequate brick cellars, began to bake to death. Others were overcome with poison fumes. Bodies were melted and mummified.

The following day, against a sky still black with ash, American bombers conducted a further raid, dropping fire upon the city’s open wounds.

In the years since, Dresden has sought not only to come to terms with the nightmare memories; but also to find understanding. History here has a clear moral purpose: to explain, and also to allow the truth to be seen. The debate over whether Dresden was a legitimate military target – or chosen for the purposes of atavistic vengeance – is still extraordinarily sensitive. All who tread here must tread carefully.

Today, the restored and rebuilt streets of the old city are patterned with echoes that honour the dead: a statue to schoolboy choristers who perished; a perfect replication of the vast 18th century Frauenkirche, with its great dome and the original fire-blackened stones remaining at its base; a vast chunk of irregular masonry left in the pavement close by, inscribed with the explanation of how it came to be parted from the church.

But there are also brass plaques in buildings and upon pavements commemorating Jewish lives lost not to the Allies, but to Nazi terror. There is an equal awareness that Dresden was under a pall of moral darkness long before the bombers came.

Most valuably, the city archives are now filled with a wide array of personal accounts of the night – diaries, letters, memoirs. Here are hundreds of voices, some in writing, some recorded, telling extraordinary and vividly moving stories from a variety of viewpoints. All of this matters intensely because for a great many years in Dresden, remembrance itself was a battlefield. Indeed, in some quarters, it still is.

There are those on the extremes of the political far-right – in east Germany, but elsewhere too – who seek to appropriate the victims of that night for their own purposes; to compare Dresdeners to victims of the Holocaust, for instance, downplaying the persecution of the Jews and magnifying the suffering of gentile German civilians. The extremists want Dresden to be seen as an Aryan martyrs’ shrine.

The people of Dresden are equally implacable in their determination that this should never be so. This is not the first time others have tried to hijack their history.

In the immediate aftermath of the war, the Red Army took control of the city and it became part of the Soviet-dominated German Democratic Republic; more totalitarianism. The Soviets had their own version of history to teach in the early years of the Cold War: that the bombing was due to the psychosis of hyper-aggressive ‘Anglo-American gangsters’. The destruction of Dresden was a warning that the Americans were remorseless.

Meanwhile, in the west, the bombing became almost a parable of the horrors of war. An American reporter, just two days after the raids in 1945, inadvertently relayed to the world that the attack on Dresden was ‘terror bombing’. The reporter’s unconsidered phrase fixed history upon its course; in Britain, in that aftermath, there was a sharp, anguished reaction from the Prime Minister himself: Winston Churchill himself sent out a memo decrying the wanton destruction.

The Air Chief Marshal of British Bomber Command, Sir Arthur Harris, had a nickname: ‘Butcher’. That he loathed the German people was no secret; his contempt bled through in memos sent to his superiors. The broad assumption was settled: that Dresden was victim to Harris’s bloodlust. For years, his name would carry the weight of responsibility for a decision that actually lay with committees higher up.

Meanwhile, the city was granted literary immortality in the late 1960s by American author Kurt Vonnegut, who had been there that night as a Prisoner of War, and who was among those forced to excavate mutilated corpses in the days after. His novel ‘Slaughterhouse Five’ had the bombing as its dark bass line.

But Dresden was not bombed because it was an ornament of German high culture that Sir Arthur Harris wanted crushed. It had genuine military significance. Memos and papers left by senior figures revealed the arguments and the wrangling.

First, the city was filled with military industry: Dresden had long been a city of scientific endeavour and its many factories were focused on delicate optical instrumentation and precision parts: in other words, it was at the advanced technical end of the German war machine.

Additionally, the city was a teeming military transportation hub; troops shuttled through the busy railway junctions and through the streets on their way to the eastern front which, by that stage in the war, was a mere 60 miles away.

The order to bomb Dresden had been triggered in part by a request from Soviet leader Joseph Stalin; he understood that an attack on this rail and road nexus would severely hamper German movements. Less forgivably, it was also a target because of the large numbers of refugees fleeing from the Red Army and passing through the city. It was calculated that bombardment would cause general chaos, furthering hampering the German troops.

But there was no such thing as precision bombing then; the plane crews – after so many missions exhausted, empty, afraid, braced for their own fiery deaths – simply got as close as they could to their designated targets.

The gradual unwarping of history over the years has been largely thanks to the people of Dresden themselves. A careful historical commission a few years back sought to establish finally and definitively the number of victims of that night (Goebbels had deliberately set the number at 250,000).In addition to this, there British historians have helped trace the decisions that led to the city’s targeting. There has also been reconciliation and remorse. A British charity, the Dresden Trust, has done much to foster even greater historical sympathy and understanding.

None of this is morbid, incidentally; quite the reverse. The city is wonderfully lively and cosmopolitan and welcoming. But the anniversary of the bombing is always marked with the greatest reverence: there is a performance of the overpoweringly moving Dresden Requiem, and the clangour of those solemn bells. They cannot bring solace. But, as one old lady, a complete stranger, remarked to me after the Requiem: ‘This is for Coventry, too’. She was referring to the savage 1940 firestorm raised in that English midlands city by the Luftwaffe. Remembrance stretches across borders too.