Spinster, old maid or self-partnered – why words for single women have changed through time

Spinster, old maid or self-partnered – why words for single women have changed through time 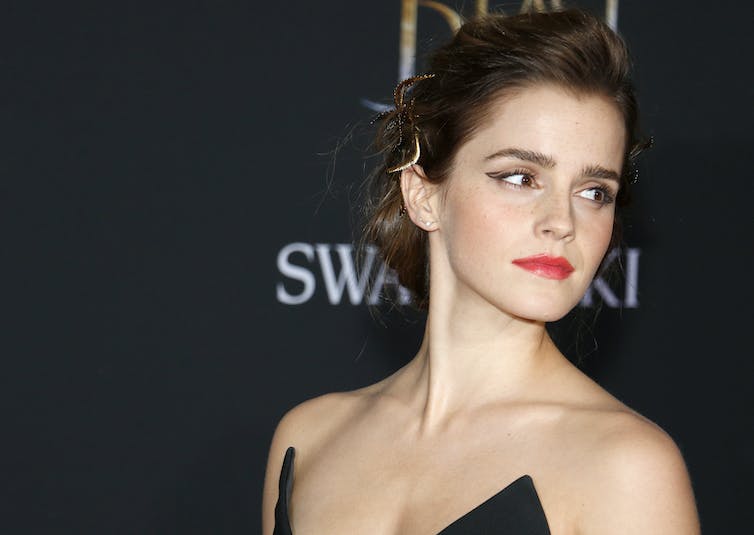 In a recent interview, was Emma Watson embarrassed to admit she was single? Tinseltown/Shutterstock.com

In a recent interview with Vogue, actress Emma Watson opened up about being a single 30-year-old woman. Instead of calling herself single, however, she used the word “self-partnered.”

I’ve studied and written about the history of single women, and this is the first time I am aware of “self-partnered” being used. We’ll see if it catches on, but if it does, it will join the ever-growing list of words used to describe single women of a certain age.

Women who were once called spinsters eventually started being called old maids. In 17th-century New England, there were also words like “thornback” – a sea skate covered with thorny spines – used to describe single women older than 25.

Attitudes toward single women have repeatedly shifted – and part of that attitude shift is reflected in the names given to unwed women.

The rise of the ‘singlewoman’

Before the 17th century, women who weren’t married were called maids, virgins or “puella,” the Latin word for “girl.” These words emphasized youth and chastity, and they presumed that women would only be single for a small portion of their life – a period of “pre-marriage.”

But by the 17th century, new terms, such as “spinster” and “singlewoman,” emerged.

What changed? The numbers of unwed women – or women who simply never married – started to grow.

In the 1960s, demographer John Hajnal identified the “Northwestern European Marriage Pattern,” in which people in northwestern European countries such as England started marrying late – in their 30s and even 40s. A significant proportion of the populace didn’t marry at all. In this region of Europe, it was the norm for married couples to start a new household when they married, which required accumulating a certain amount of wealth. Like today, young men and women worked and saved money before moving into a new home, a process that often delayed marriage. If marriage were delayed too long – or if people couldn’t accumulate enough wealth – they might not marry at all.

Now terms were needed for adult single women who might never marry. The term spinster transitioned from describing an occupation that employed many women – a spinner of wool – to a legal term for an independent, unmarried woman.

Single women made up, on average, 30% of the adult female population in early modern England. My own research on the town of Southampton found that in 1698, 34.2% of women over 18 were single, another 18.5% were widowed, and less than half, or 47.3%, were married.

Many of us assume that past societies were more traditional than our own, with marriage more common. But my work shows that in 17th-century England, at any given time, more women were unmarried than married. It was a normal part of the era’s life and culture.

In the late 1690s, the term old maid became common. The expression emphasizes the paradox of being old and yet still virginal and unmarried. It wasn’t the only term that was tried out; the era’s literature also poked fun at “superannuated virgins.” But because “old maid” trips off the tongue a little easier, it’s the one that stuck.

The undertones of this new word were decidedly critical.

“A Satyr upon Old Maids,” an anonymously written 1713 pamphlet, referred to never-married women as “odious,” “impure” and repugnant. Another common trope was that old maids would be punished for not marrying by “leading apes in hell.” 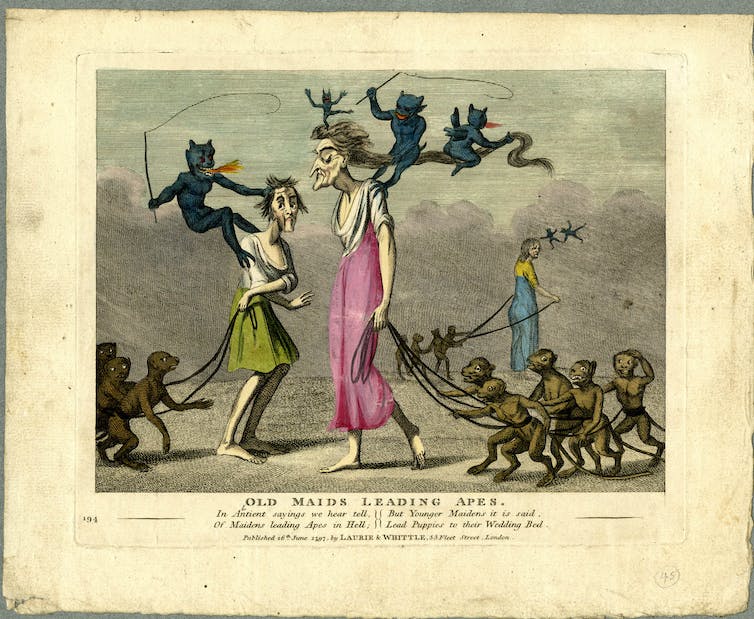 At what point did a young, single woman become an old maid? There was a definitive line: In the 17th century, it was a woman in her mid-20s.

For instance, the single poet Jane Barker wrote in her 1688 poem, “A Virgin Life,” that she hoped she could remain “Fearless of twenty-five and all its train, / Of slights or scorns, or being called Old Maid.”

These negative terms came about as the numbers of single women continued to climb and marriage rates dropped. In the 1690s and early 1700s, English authorities became so worried about population decline that the government levied a Marriage Duty Tax, requiring bachelors, widowers and some single women of means to pay what amounted to a fine for not being married.

Still uneasy about being single

What we’re experiencing now isn’t a historical first; instead, we’ve essentially returned to a marriage pattern that was common 300 years ago. From the 18th century up until the mid-20th century, the average age at first marriage dropped to a low of age 20 for women and age 22 for men. Then it began to rise again.

There’s a reason Vogue was asking Watson about her single status as she approached 30. To many, age 30 is a milestone for women – the moment when, if they haven’t already, they’re supposed to go from being footloose and fancy-free to thinking about marriage, a family and a mortgage.

Even if you’re a wealthy and famous woman, you can’t escape this cultural expectation. Male celebrities don’t seem to be questioned about being single and 30.

While no one would call Watson a spinster or old maid today, she nonetheless feels compelled to create a new term for her status: “self-partnered.” In what some have dubbed the “age of self-care,” perhaps this term is no surprise. It seems to say, I’m focused on myself and my own goals and needs. I don’t need to focus on another person, whether it’s a partner or a child.

To me, though, it’s ironic that the term “self-partnered” seems to elevate coupledom. Spinster, singlewoman or singleton: None of those terms openly refers to an absent partner. But self-partnered evokes a missing better half.

It says something about our culture and gender expectations that despite her status and power, a woman like Watson still feels uncomfortable simply calling herself single.