Noelle Salazar was born and raised in the Pacific Northwest where she's been a Navy recruit, a medical assistant, an NFL cheerleader, and always a storyteller. When she's not writing, she can be found dodging raindrops and daydreaming of her next book. Noelle lives in Bothell, Washington, with her husband and two children. THE FLIGHT GIRLS is her first novel. For more information, please visit www.noellesalazar.com and follow @noelle_salazar on Twitter. 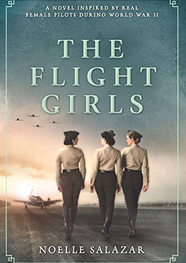 What is a hero? It’s a question I’ve pondered off and on for the past seven years, ever since I came across a stack of books at my aunt’s house and read a piece of WWII history I hadn’t previously known.

The Women Airforce Service Pilots program (WASP), was the brainchild of famed aviatrixes Jacqueline Cochran and Nancy Harkness Love and—with the assistance of General Henry “Hap” Arnold, the commanding general of the Army Air Forces—they built a program teaching female pilots to fly every type of airplane the military owned, so long as they met the age and height requirements, had 500 flying hours under their belt each, and a pilot’s license in hand. They were taught to fly “the Army way” and flew warplanes that had been damaged in battle, planes right off the production line, simulated strafing missions, and towed gunnery targets for live ammunition training. The women who flew were bound by spirit and duty, bravery and skill… and bonded by their love of country and a job they knew they could do well. Some say they could handle those planes better than many of the men.

If they washed out, they had to pay their own way home. If they were injured or killed, it was up to their friends and family to get them the care, or the casket, they needed.

Once training was finished, they were sent to one of the many military bases across the country where they ferried planes from base to base, transported military personnel and cargo, or continued testing new planes. There wasn’t always a designated space for them to bunk, so sometimes they slept in the nurse’s quarters. Other times they had to get a hotel room. No plane to fly back to the base you just landed at? No problem! Wait around for a day or more, or get yourself a ticket on a commercial flight – on your own dime of course. They weren’t allowed to pack much in the way of clothing—warplanes don’t always have a lot of room for luggage—so they tucked spare bits of clothing in the cockpits’ nooks and crannies. There were undergarments in logbooks, a pair of heels beside their seat. Sometimes they got stuck in a city for days, washing and re-washing the few items of clothing they’d brought until they could get back to their home base.

I was stunned by anecdotes of bravery, death and outright misogyny. And I was baffled the subjects of these stories had tried to be heard, but still, seventy-seven years later, for the most part were unknown to the greater public.

On a humid and windy May morning I arrived at what is now the Texas State Technical College. Seven-plus decades ago though, in place of the brick buildings, stood long wooden structures that housed the pilots that trained here. There were offices and a chow hall, classrooms, and hangars. Boots marched on this dirt. Planes buzzed overhead at all hours of the day and night in the wide-open blue sky. This had been Avenger Field. And in 1942 - 1944, 1,074 women served their country with bravery and a whole lot of moxie.

What brought me there was the annual WASP Homecoming Reunion. I had heard there would be five members attending. Only two were able to make the trip. Kay Hildebrand and Dorothy Lucas were greeted with a salute and escorted from their cars by service women and men, who then rolled them in their respective wheelchairs between two walls bearing their comrades’ names and helped them onto the low brick wall that encircled a wishing well- the same one they’d jumped in when they’d graduated the program so many years before, and where they sat now, smiling at their admiring crowd.

The faces smiling back were both young and old. Some women wore outfits of an era gone by, their hair in Gibson Rolls, their lips painted red. There was one dressed as Rosie the Riveter and a young girl named Jenna sporting a pilot’s costume, goggles perched upon her little head. There were family members and fans, and there were the women who came after. Women who may never have had the chance to wear an Air Force uniform if not for the two women by the fountain.

Those two women – representing the 1,074 who served. They did not fight in Pearl Harbor. They didn’t storm the beach of Normandy. They didn’t serve in the Pacific or stand on the front lines of any battle. They never stared down the barrel of a rifle, waiting to plunge a bullet into a Nazi soldier racing to try and land his shot first.

But they did serve their country. They served at home, on American soil. They served without military status or benefits. Without expectation or praise.

These are the women history forgot.

These are the women erased from history.

Do they not deserve recognition purely because they weren’t allowed to step foot on a front line? Or drop a bomb from thousands of feet in the air? Or sit in the ball turret of a B-17 discharging a machine gun?

They signed up with no chance at being promoted. No raise in their future. No contract stating they’d be taken care of. And they did it with pride… and barely a thank you in return.

The WASP program ended on December 20, 1944. The women, with some exceptions, were responsible (of course) for getting themselves home. If they wanted to have a career flying, they’d have to find it elsewhere. They were no longer invited to fly the military’s aircraft.

And that was it. The file on them was sealed and for thirty-five years there was not a peep about what these birds of war had done. How they had stood up to serve their country – and how their country disserved them.

In 1977, after much debate between the Veterans Administration and the Department of Defense – the former against, the latter in favor of—the WASP were finally given veteran status and President Jimmy Carter signed it into law in November 23rd of that year. On March 10, 2010, President Barack Obama awarded the WASP with the Congressional Gold Medal.

And yet, why do so few know about these fearless flyers STILL? Why is their story not being added to curriculums across the country? Being taught in elementary schools, high schools, colleges? They are barely a blip on the History Channel’s website. I almost fell off the sofa when Josh Gates from Expedition Unknown went in search of Gertrude “Tommy” Tompkins, a WASP who went missing after taking off from an airfield decades ago. I shouldn’t be surprised to see these stories. It should be a given that ALL those who served have their stories told. There should be fieldtrips to the National WASP Museum. There should be mentions and parades and films!

I stood watching the two remaining WASPs sitting at that wishing well. When I’d first learned of their service, I was astonished and outraged I hadn’t known before. I hadn’t expected that, since that day eight years ago, I would fall in love with their stories. That I would write a book inspired by them. That I would become one of their biggest fans and greatest champions.

What is a hero? By definition a hero is a person admired for courage, outstanding achievements, or noble qualities.

I think the WASP fit that bill.  They are certainly my heroes.