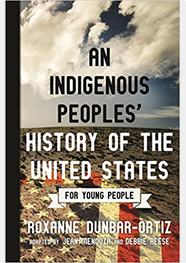 My book, An Indigenous Peoples’ History of the United States, was published five years ago and has found a wide readership, especially among teachers and college students. Now, the book has been brilliantly adapted for young readers by Jean Mendoza and Debbie Reese, both scholars specializing in the absence or flawed presence of American Indians in children’s literature.

The resulting text in no way dumbs down the original, maintaining the recurrent theme that the history of the United States is a history of settler-colonialism; that it is a history of aggressive war—often genocidal—against Native nations in order to acquire their lands and resources and turn the sacred and sustaining into real estate; that the wealth of the colonial elite founders of the United States derived from the capital value of the bodies of enslaved Africans and their forced unpaid labor, as well as speculation in seized Indigenous lands; that their motives for independence was economic, to expand across the continent without the restrictions imposed by the British Crown.

Throughout the text, the present is visible in that past: modern police forces derived from slave patrols still target Black men; real estate/private property remains the basis of wealth;  white supremacy­­­; continued colonization of Native nations, Hawaii, Alaska, Guam, Puerto Rico; a constitutionally guaranteed armed citizenry and continued gun violence creates a population crushed by fear of the other; the unending war against Mexicans on a disputed border wrought by the invasion, occupation, and annexation of the northern half of Mexico; forever aggressive wars against peoples of the non-European world, with nearly a thousand US military bases outside the United States and floating war machines on every coast and at sea.

Some parents, educators, and especially politicians and mainstream historians, regard such naked truths as inappropriate or even harmful for minors. But the proverbial cat is out of the bag. Indigenous scholars, poets, novelists, theater and filmmakers, environmentalists and other activists, who have always been there but little heeded, have formed a critical mass of documentation, testimony, and interpretation of US history that cannot be refuted or assimilated into current standard or multicultural narratives.

A current example of why this book for young people is so needed is a controversy over a mural titled “Life of Washington.” The mural covers 1600 square feet of a wall at the entrance of George Washington High School in San Francisco, which opened with the mural as a part of the structure in 1936 during the depression.  It’s one of the few examples of public art that presents a counter-narrative to the common depiction of the founding of the United States, portraying Washington as a wealthy slave ownerand Indian land speculator. In the mural, bent enslaved Africans work the fields as palatial Mt. Vernon looms; Washington, with his land surveying equipment on one side of the mural, points westward over a slain Native and white settlers rush to occupy land taken by violence.

Paloma Flores of the Pitt River nation in northern California is the San Francisco school district’s program coordinator of Indian education and thinks the mural should be removed: “We do have to speak the truth rather than continue to support the dominant narrative view of erasure, the romanticizing of the settlement process, and the lies that have been told.” Paloma observes that without updated textbooks reflecting the truth, the harsh images depicted in the mural can be hurtful to Native and Black students.

This is what I have heard echoed in the past five years from K-12 teachers:  they are hungry to learn how to incorporate Indigenous history into classes and to have texts that provide context to truthful images, like the Washington mural, and racist depictions of history, which are far more common. We decided to adapt the book in response to such calls from educators and parents.

Each chapter of the book includes items that enhance the text. There are maps, photographs, and inset boxes that ask students to engage with the context. One example is “George Washington: Hero? Or Monster? It depends on who you ask!” It gives readers the opportunity to think critically about Washington's work as a land speculator, how it benefited him personally, and why the Senecas called him "Town Destroyer."

Children are able and eager to comprehend history. Today, young people have access to vast information on demandand  can easily debunk myths about US history.  However, assembling a coherent narrative that inspires students to image a different world is much more complicated than a Wikipedia search. Teachers can only carry out this task if they have access to narrative histories that are decolonized.