The Expansion of Presidential Power Since 1973 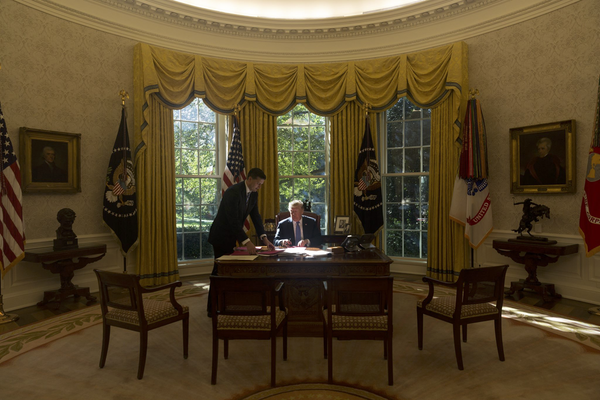 Nearly a half century ago, famed historian and scholar Arthur Schlesinger, Jr. published The Imperial Presidency. This path breaking work described the growing centralization of the executive branch of the American government since the 1930s. The Imperial Presidency was published at the height of the Senate Watergate hearings in 1973, and brought essential attention to the need to prevent further abuses in the office of the Presidency.

Congress reasserted its authority after Watergate as it passed the War Powers Act of 1973 (which they passed by overriding Nixon’s veto), tried to limit FBI and CIA activities through the Church Committee investigations of the mid 1970s, and passed the Ethics in Government Act to create Special Prosecutors to investigate accusations of illegal activities in the executive branch. Unfortunately, these actions didn’t have the impact many in Congress hoped for: the War Powers Act was ignored by future Presidents who intervened regularly without giving notice under the law and the Church Committee investigations had no substantial long range impact.

Presidents continued to expand their executive power. Republican President Ronald Reagan, despite his promotion of conservatism and the goal of making the federal government smaller, expanded the power of the presidency not through law but through precedent: because his substantial unilateral actions were not challenged, he set a precedent for future presidents.This was particularly evident in foreign policy, most notably the Iran Contra Affair.   Congress had banned any involvement or intervention in the civil war raging in Nicaragua against the leftist Sandinista government. Reagan’s administration nonetheless arranged secret arms sales to Iran and used the funds from those sales to support the anti government “Contras” in Nicaragua. Although some members of Congress called for impeachment proceedings, it was avoided because Reagan was in his second and final term, and because his warm personality and great oratorical ability made him widely popular. Reagan also used his executive power to authorize a secret intervention in Afghanistan against the Soviet Union, supported Iraq and Saddam Hussein in their war against Iran, and simultaneously sold arms to Iran.

Reagan was then succeeded by his Vice President, George H.W. Bush. Bush, with his experience as Director of the Central Intelligence Agency under President Gerald Ford, also intervened internationally without Congressional authority. Bush authorized  the invasion of Panama in 1989 and organized a coalition to force Iraqi dictator Saddam Hussein out of Kuwait during the brief Persian Gulf War of 1991. Bush did not seek a Congressional declaration of war, and instead simply gained authorization to use force. At the end of his first and only term in the Oval Office, Bush, with his Attorney General William Barr, pardoned the major figures who had been convicted or were still facing trial as part of  the Iran Contra scandal.  This prevented any further investigation of the possibility that Bush himself was involved in that scandal. Bush followed in Reagan’s footsteps: he continued to take unilateral action in foreign policy and acted to ensure that Reagan never was held responsible for his presidential actions, confirming that presidential powers had expanded.

When Democrat Bill Clinton came to office, and once the Republican opposition gained control of both houses of Congress in the midterm elections of 1994, the Republicans were less supportive of unchecked presidential power. While they had been unconcerned about Presidential power under Reagan and Bush, they complained that Clinton abused executive orders on domestic issues, including the environment. Clinton was also heavily investigated and even impeached over his personal behavior with women, including Paula Jones and Monica Lewinsky.

When Republican George W. Bush (2001-2009) came to power after the contested Presidential Election of 2000, he brought into government two figures who were particularly keen to add to executive leadership: Vice President Dick Cheney and Secretary of Defense Donald Rumsfeld. After the attacks on September 11, 2001, Cheney and Rumsfeld used national security concerns to justify the use of surveillance and “enhanced interrogation techniques” (torture). The Patriot Act was passed with very few dissenting votes, and the Department of Homeland Security was created.

The decision to go to war in Afghanistan and Iraq based on faulty information caused some to call for the impeachment of George W. Bush, and a bill was introduced by Congressmen Dennis Kucinich of Cleveland, Ohio, and Robert Wexler of Boca Raton, Florida in 2008. The charges lodged against Bush in the impeachment resolution included accusations that Bush had misled the nation on the need for the invasion of Iraq; his conduct of the Iraq War; the treatment of detainees; the National Security Agency Warrentless Surveillance; and failure to comply with Congressional subpoenas. Democratic Speaker Nancy Pelosi resisted any move toward impeachment, with Bush’s time in office nearing its end.

Once the Democrats lost control of the House of Representatives in the midterm 2010 elections, and control of the Senate in the 2014 midterm elections, the Republicans worked mightily to attempt to block the agenda of the new President Barack Obama. Republicans argued Obama was abusing his power with his “excessive” use of Executive Orders on issues, such as the creation of numerous commissions, boards, committees, and task forces; along with Obama’s actions on environmental protections, his health care actions, and his initiatives on opening up relations with Cuba and authorizing the Iran Deal to prevent nuclear development.  Republicans further curtailed his agenda as they refused to even consider the nomination of Merrick Garland to replace Antonin Scalia on the Supreme Court after the latter’s death in early 2016, and prevented other judicial confirmations to the lower courts.  But Obama’s administration was scandal free, and no cabinet officers or other high ranking figures were indicted or convicted for corruption, which had been endemic under Reagan and the second Bush in particular.

Now Republican President Donald Trump has made the controversies under earlier Republican Presidents Reagan and the two Bushes look minor by comparison. Some even consider his  abuse of power as more scandalous than the Presidency of Richard Nixon. Many are concerned over the  involvement of Russia in the 2016 election; Trump’s violation of the Emoluments Clause; the abuse of power; obstruction of justice; and the massive corruption and incompetence of so many cabinet officers and other high officials under Trump which make him seem unfit for office.

The crisis is greater than Watergate in many respects because Trump has now made it clear he will not cooperate with any Congressional committee demands for evidence or witnesses. He, perhaps jokingly, perhaps seriously, asserted the right to an extra two years as president because he believes he has been mistreated in his first two years due to the Robert Mueller investigation.  And his Attorney General William Barr, the same man who assisted George H. W. Bush in his move toward blanket pardons at the end of his term in 1992, is also refusing to give Congressional committees the entire Mueller report without any redactions.  And now Trump has declared he will not cooperate on any legislative actions by Congress until the “witch hunt” he sees against him comes to an end, which is not about to happen.

With Trump using his executive powers to attempt to reverse all of Obama’s accomplishments in office, and that of many other Presidents in the past century, unchecked presidential power has never seemed more of a threat.  Arthur Schlesinger Jr’s book from 1973 is now just the prelude to a far greater constitutional crisis that is possibly, in a permanent manner, transforming the Presidency and destroying the separation of powers and checks and balances created by the Founding Fathers in 1787.