Where are all the history majors?

Benjamin M. Schmidt is assistant professor of history at Northeastern University and core faculty at the NuLab for Texts, Maps, and Networks. 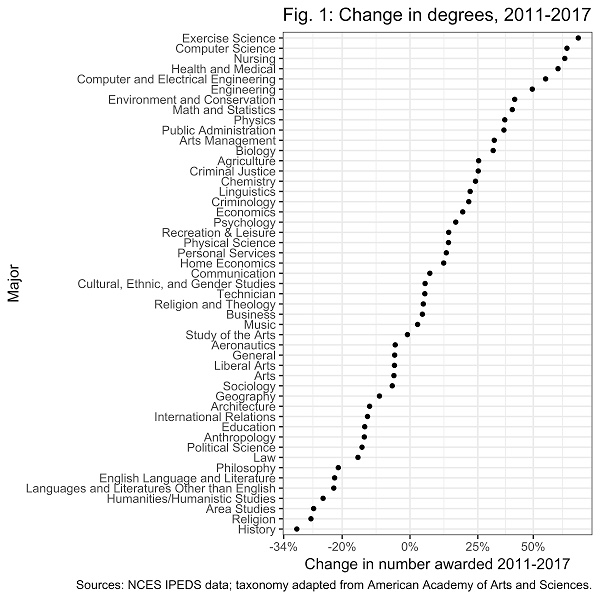 Since the economic crisis of 2008, the pattern of undergraduate majors has been shifting across American higher education. Of all the major disciplines, history has seen the steepest declines in the number of bachelor’s degrees awarded. In 2008, the National Center for Education Statistics reported 34,642 majors in history; in 2017, the most recent year for which data are available, the number was 24,266. Between 2016 and 2017, the number of history majors fell by over 1,500. Even as university enrollments have grown, history has seen its raw numbers erode heavily. The drops have been especially heavy since 2011–12, the first years for which students who saw the financial crisis in action could easily change their majors; of all the fields I’ve looked at (Fig. 1), history has fallen more than any other in the last six years.

This represents a long-term low for the history major. National data on the numbers of degrees awarded in different disciplines generally start around 1966, but years ago, while working for the American Academy of Arts and Sciences’ Humanities Indicators project, I collected data on a number of humanities majors going back to the 1950s. While the 66 percent drop in history’s share from 1969 to 1985 remains the most bruising period in the discipline’s history, that drop followed a period of rapid expansion in share connected to the boom in higher education of the 1960s. The drop in the last decade has put us below the discipline’s previous low point in the 1980s (Fig. 2).

Share can be a misleading metric. Higher education as a whole has drawn in new groups of students in the past half century, so historians sometimes assume that we must not be losing after taking these statistics into account. But even considering history degrees as a percentage of all college-age adults in the United States, the current level of 5.3 degrees per 1,000 23-year-olds sits well below the peaks in 1971 (11.8 per 1,000) and 1993 (7.6 per 1,000), though above the mid-80s trough. Since older students and international students have become more common, this probably underestimates our slide within the core college-going population. Setting ratios aside altogether, the raw number of BAs in history awarded in 2017 was smaller than in any year since 1991, and lower than each year between 1965 and 1977. ...