Marius Kothor is a PhD student in the Department of History at Yale University. Her current research focuses on the role of market women in the construction of national identity in Togo, and the construction of African identity among Africans living in the United States. Follow her on Twitter: @AfrikanaPress. 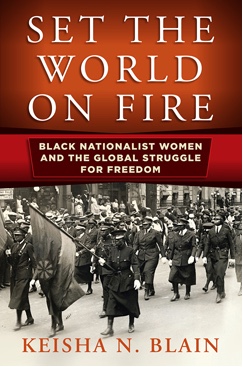 Historical scholarship on black nationalism and black internationalism generally emphasizes the ideas and experiences of men. With few exceptions, historical accounts marginalize women’s roles in black nationalist and internationalist movements. In a groundbreaking new book, historian Keisha N. Blain makes a significant contribution to this history by showing how critical women were as leaders and organizers in these movements.

Blain’s Set the World on Fire: Black Nationalist Women and the Global Struggle for Freedom (University of Pennsylvania Press, 2018) is the first book of its kind to examine how black nationalist women engaged in national and global politics from the early twentieth century to the 1960s. In this new and original study, Blain charts the diverse ideas and activism of a group of unsung black nationalist women who advocated for the rights and liberation of black people in the United States and abroad. While historians generally portray the period between the Garvey movement of the 1920s and the Black Power movement as an era of declining black nationalist activism, Blain argues that the Great Depression, Second World War and early Cold War represent a golden age of black nationalist women’s political activism. The book draws on an array of primary sources, including archival materials, historical newspapers, government records, songs and poetry.

Dr. Blain is an Assistant Professor of History at the University of Pittsburgh. She is the current president of the African American Intellectual History Society (AAIHS) and senior editor of its blog, Black Perspectives. She earned a doctorate in History from Princeton University. In addition to Set the World on Fire, she is the co-editor of The Charleston Syllabus: Readings on Race, Racism, and Racial Violence (University of Georgia Press, 2016); New Perspectives on the Black Intellectual Tradition (Northwestern University Press, 2018) and To Turn the Whole World Over: Black Women and Internationalism (University of Illinois Press, 2019).

Marius Kothor: Set the World on Fire conceptualizes Mittie Maude Lena Gordon, Ethel Waddell, Celia Jane Allen, Ethel Collins, Amy Jacques Garvey, Amy Ashwood Garvey, Maymie Leona Turpeau De Mena, and several others, as a cohort of black nationalist women. When you first began researching this book, did you initially think of the women as a cohort? When did the idea of writing about them as a collective begin to take shape?

Keisha N. Blain:I began to conceptualize these women as a group very early during the research process once I had a clear sense of how I was defining black nationalism in the study.

As with any ideology, black nationalism is neither static nor monolithic. But for the purpose of this study, I define black nationalism as the political view that people of African descent constitute a separate group or nationality on the basis of their distinct culture, shared history, and experiences. The women profiled in my book all embraced the core tenets of black nationalist thought—Pan-African unity, racial separatism, black pride, political self-determination, and economic self-sufficiency. Regardless of their organizational affiliation, these women embraced these ideas even as their strategies and approaches varied.

Black nationalism, then, functioned as the common thread that brought these women together ideologically during the twentieth century. It also brought them together in real life. Many of the women I profile in the book worked together at some point in their lives—they were all part of a transnational network of black activist women who saw black nationalism as a viable political strategy for challenging global white supremacy.

Kothor: One of the most important contributions your book makes to the literature on Garveyism is its illustration of how much of the work of disseminating Marcus Garvey’s ideas was done by black nationalist women after the collapse of the Universal Negro Improvement Association (UNIA). While the women in your book drew heavily from Garveyism, they also incorporated teachings from other religious and intellectual traditions. How did this eclectic combination of ideas and practices help them attract followers to their movements?

Blain: Yes—black women helped to sustain black nationalist politics in the United States especially after Marcus Garvey’s deportation in 1927. These women were skillful activists and theorists who drew on Garvey’s ideas as well as the ideas of other black political and religious leaders of the twentieth century.

Some of the women in my book were especially drawn to the teachings of Noble Drew Ali, founder of the Moorish Science Temple (MST)—the precursor to the Nation of Islam. For example, Mittie Maude Lena Gordon—who had been a member of Garvey’s UNIA during the 1920s— drew on Noble Drew Ali’s idiosyncratic Islamic teachings when she established her own organization, the Peace Movement of Ethiopia (PME), in 1932. Ali’s teachings had particular appeal to Gordon because they offered an alternative to mainstream Christianity, which she viewed as the religion of white oppressors.

But even as she drew inspiration from Ali’s Islamic teachings, Gordon maintained some amount of flexibility—she did not expect her followers to embrace Islam or adhere to the distinct rituals and practices of the MST. She also did not discard of Christianity altogether because she recognized its utility as she worked to expand the reach of her political message. In the South, for example, her organization held meetings primarily in black churches. Ultimately, the eclectic combination of ideas and practices in the PME helped to attract a wide range of black followers.

Kothor: While many of the women profiled in the book used their leadership positions to challenge masculinist visions of black liberation, at various points, they also upheld patriarchal ideas about male leadership. What accounts for their conflicting views on women’s role in black liberation movements?

Blain:Women’s inconsistent ideas on patriarchy reflect the underlying tension between two core features of the black intellectual tradition: black nationalism and feminism. It’s important to remember that black nationalism--as an idea and as a movement--has always been masculinist. Black nationalist women had to find a way to carefully navigate this political terrain even when they sought to challenge it. At times, they were bold and fearless in their opposition to patriarchy. And at other times, they were far more complicit. Sometimes they simultaneously articulated a masculinist vision of black liberation—one that was very much in line with black nationalist discourses—while engaging in activities that sought to expand women’s influence and leadership.

Ultimately, black nationalist women had to shoulder two responsibilities. While these women found ways to challenge patriarchy and even attempted to expand opportunities for themselves, their activities were stillcircumscribed by the masculinist traditions of nationalist movements in which black men were fighting to provetheir manhood—often at the expense of women’s rights and autonomy.

Kothor: In many ways, the book is a story about the movement of people and ideas. The immigration of Afro-Caribbeans into the United States, the migration of African Americans from the U.S South to the North, and ideas about emigration to Africa all feature prominently in the lives of the women you write about. Why was the idea of starting new somewhere else so appealing to many people of African descent in the interwar period?

Blain: As is often the case, people move from place to place in search of better opportunities and because they are hopeful that their situation would improve if only they could escape their current realities. This was certainly true for many black men and women in the interwar period. The Great Depression exacerbated already poor socioeconomic conditions for people of African descent, and this reality—combined with rampant discrimination, racism, and white mob violence—fueled an interest in relocation. Black men and women in this period often moved to new places—or desired to move to new places—because they maintained the view that life would improve if only they could only start anew. For many of the women in my book, this was a constant cycle. The same women who had moved from the U.S. South to the North or those who had migrated from the Caribbean to the United States were later at the forefront of emigrationist movements to leave the United States and relocate to West Africa.

Kothor: Although emigrationist ideas seemed to appeal to many working-class and working-poor African Americans, I was struck by how negatively many middle-class African reacted to the idea of moving back to Africa. How did people’s social-economic status shape their attitudes towards emigration and Africa at this time?

Blain: Black Americans’ socioeconomic status certainly shaped their perspectives on the matter of emigration. Those who had more opportunities for upward social mobility were often very resistant to the idea of abandoning life in the United States. For those who were struggling to make ends meet, the idea of relocating to West Africa was appealing—especially because many believed there was an abundance of jobs and educational opportunities for black people there.

At the same time, it’s important to remember that emigrationist sentiments have been deeply rooted in black politics for centuries. Because of feelings of displacement—as a result of forced migration and enslavement—black people have embraced the idea of going (back) to Africa at one point or another. For some, economic instability in their lives helped to fan the flames of interest in emigration.

Blain: I use the term grassroots internationalism in my work to emphasize how working-class and working-poor black men and women engaged in internationalist politics at the local level, without ever physically crossing geographic borders. While travel is central to the history of black internationalism, we run the risk of overlooking many black actors when we privilege travel in our historical accounts. Some people simply could not afford it.

That was the case for Mittie Maude Lena Gordon and so many other women in the book. They maintained a global racial consciousness but found themselves physically restricted to their communities on account of limited financial resources. Midwestern cities like Chicago and Detroit provided crucial cites for grassroots internationalism in the twentieth century. These industrial cities had a thriving black consumer culture and intellectual community and they drew people from the world over. As a result, they provided fertile ground for black internationalist political activity. Black women activists skillfully capitalized on their geographical location—forging transnational alliances with a diverse group of men and women residing in, and traveling through, the Midwest during the twentieth century.