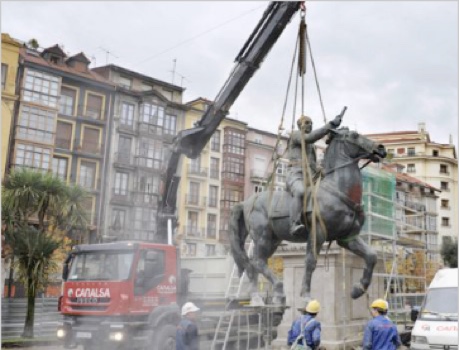 Events in Charlottesville, Virginia, this past August drew the attention of Americans to the question of Confederate markers and monuments in an unprecedented way. For most, only two alternatives come to mind – remove these memorials or keep them intact. Polls show that a significant and growing minority support removal. Following this line of thinking, the mayors of New Orleans and Baltimore ordered that Confederate statues be hauled away under cover of darkness. An unruly crowd in Durham, North Carolina, toppled a Confederate soldier’s monument in an illegal act. Many other southern communities, including Charlottesville, voted to remove markers and monuments honoring their secessionist heritage. A slight majority of Americans, however, particularly whites of southern lineage, argue fiercely that these symbols should remain. To do otherwise, they claim, would be an assault on their history. In a very few cases, experts have suggested more creative solutions – removing them to a museum or juxtaposing them with markers or monuments dedicated to a countervailing movement or cause, such as the Civil Rights Movement of the 1950s and 1960s.

This past May, my colleague, Greg Sumner, and I thought and talked a great deal about Confederate markers and monuments – and the manner in which they often obscure or overlap symbols of “the better angels of our nature” – as we led students from the University of Detroit Mercy on an eight-day trip to the landmarks of the southern Civil Rights Movement in Alabama, Mississippi, and Tennessee. We encountered contested memory at every turn. Streets named for Rosa Parks and Martin Luther King intersect ones named for Jefferson Davis in Montgomery and Selma and elsewhere. Walking the single block to the Alabama State Capitol from Dexter Avenue Baptist Church, King’s congregation during the Montgomery Bus Boycott, one passes multiple markers and obelisks devoted to Confederate memory, most of them put into place in the mid-twentieth century. Even more are evident on the Capitol grounds, including Confederate statuary and a marker noting the location where Davis took the oath of office in 1861 as Confederate President. The Civil War and the Civil Rights Movement are constantly juxtaposed across the landscape of the urban South.

Two of the Confederate markers and monuments encountered on the trip – and the unique ways in which individual southern communities responded – became the focal point of our ongoing discussions in the wake of Charlottesville.

A once obscure plaque in Pulaski, Tennessee, at the birthplace of the Ku Klux Klan, prompted the first of these community responses. Although initially organized in 1865 as a social club for Confederate veterans, the Klan quickly morphed into a vehicle for racial terrorism of newly-emancipated blacks. In 1917 the United Daughters of the Confederacy recognized the building in which the Klan was founded as an important part of Confederate heritage by placing a plaque there. The marker generated little notice until the early 1980s, when Klansmen, neo-Nazis, skinheads, and other white supremacists began holding annual rallies in the town on King’s birthday. During these rallies, racists frequently took the opportunity to bow before the plaque, to kiss it, and to have their photograph taken beside it. In 1989 the new owners of the building, Don and Marguerite Massey, decided to take action. They unbolted the plaque, turned its face to the exterior wall, and re-bolted it to the surface, so that only the smooth bronze back is visible. The Masseys feared that removing the plaque entirely might make it “a potential lightning rod” for white supremacists. Instead, as Marguerite Massey commented to the press: “We turned our back to the Klan and our plaque to the wall.” Most residents of Pulaski, tired of being known nationally as “the birthplace of the KKK,” applauded the Masseys’ symbolic act. The plaque now represents the community collectively turning its back on its Klan legacy.

The namesake of the well-known Edmund Pettus Bridge in Selma, Alabama, prompted the second. Constructed in 1940, the structure was named for a Confederate general, Grand Dragon of the Alabama Klan, and U.S. senator who played a major role in the disfranchisement of Alabama blacks in 1901. Because of this suspect history, there were two popular statewide attempts to rename the bridge over the past decade. African American leaders, however, argued that the bridge’s historic role in the fight for the Voting Rights Act in1965 had repurposed and sanctified the name. They pointed in particular to the events of March 21, known to history as “Bloody Sunday,” when the Alabama State Police brutalized hundreds of marchers with billy clubs and tear gas in front of a national television audience. In the midst of the debate, members of Congress Terri Sewell of Alabama and civil rights icon John Lewis of Georgia issued a joint statement: “We can no more rename the Edmund Pettus Bridge than we can erase this nation’s history of racial intolerance . . . Changing the name of the bridge would compromise the historical integrity of the voting rights movement.” The majority-black Selma City Council agreed and voted unanimously to keep the name intact. Each year, thousands of visitors walk across the bridge, recalling the deeds of “Bloody Sunday,” largely unaware of its Confederate namesake.

Both in Pulaski, Tennessee, and in Selma, Alabama, southern communities took symbols of their ugly racial past, signified by markers and monuments to their Confederate heritage, and repurposed them. Their actions provide meaningful alternatives to the all-or-nothing nature of our current debate. They remind us that we need to be a little more creative in approaching this issue.