Fake News? Maybe This Is What Democracy Looks Like

Jocelyn Olcott, Associate Professor History and Gender, Sexuality & Feminist Studies at Duke University, is a historian of twentieth-century feminism. Among her books is International Women's Year: The Greatest Consciousness-Raising Event in History. 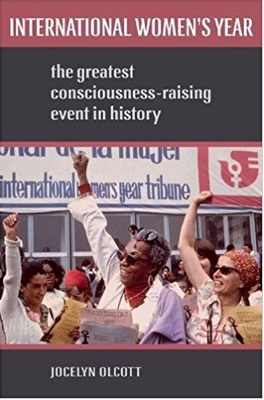 Less than a week into the 1975 United Nations International Women’s Year Conference in Mexico City, the daily newspaper El Universal ran an editorial about SCUM, the Society for Cutting Up Men. The essay, titled “Extremist Feminism,” appeared alongside a cartoon depicting a sinister-looking woman fantasizing herself as a happy cavewoman dragging a caveman whom she has apparently bludgeoned with a club. Deriding SCUM as a “strange feminist entity” whose principles were “at very least questionable,” El Universal stressed that “between the exaltation of the feminine and the emasculating denigration of the masculine, there is an abyss.” Several days later, the Spanish newspaper ABC Sevilla ran a piece describing SCUM Manifesto author Valerie Solanas — notorious for shooting Andy Warhol — holding a press conference in Mexico City in which she explained the group’s basic objectives that men be “eliminated, vanquished, or converted into slaves.”

The problem with these stories was not simply that Valerie Solanas did not attend the Mexico City conference, much less hold a press conference. As historians of US feminism will know, SCUM was a figment of Solanas’s lively imagination. “It’s hypothetical,” she would explain to The Village Voice two years later. “No, hypothetical is the wrong word. It’s just a literary device. There is no organization called SCUM.” Perhaps someone had alerted the editors at El Universal; the following day’s edition included an editorial describing the organization as “not very extensive.”

While this episode hardly rises (or sinks) to the level of the false editorializing that caused the pizza restaurant Comet Ping Pong debacle that nearly came to bloodshed late last year, it highlights the longstanding problem of what we have come to dismiss as “fake news.” Critics across the political spectrum apply the label not only to outright falsehoods — Comet Ping Pong’s child-trafficking ring was as much as fantasy as SCUM — but also to accounts with which they disagree, accounts that seem so hopelessly biased that they cannot legitimately claim the generic objectivity of “news.”

The media coverage of the International Women’s Year (IWY) conference offers some lessons for thinking about this more widespread accusation of fake news. The events — both the government conference of instructed delegations and the parallel tribune of non-governmental organizations (NGOs) — were intended as media spectacles. The UN’s media office planned a journalists’ encounter for several days prior to the conference, and the NGO tribune organizers spent a large portion of their time and budget to organize a newspaper, Xilonen, that would cover developments in both the conference and the tribune and facilitate communication between the two venues. Xilonen carried articles and editorials in English, Spanish, and occasionally French, and the International Women’s Year gatherings drew regular coverage from US and Mexican dailies as well as patchier reporting in newspapers around the world.

As the Italian cultural theorist Antonio Gramsci explained in the 1920s, mass media create a common sense within a society — cultivating a shared set of assumptions and values that are expressed through silences and emphases, through editorial choices about language and images, and through decisions about which stories to pursue and which to ignore. The media coverage of the IWY conference fostered two distinct common senses, one in the Spanish-language media and another in the Anglophone media. Even in Xilonen, the stories in Spanish and English were not direct translations of one another but rather explained the same event from different perspectives and to distinct publics. This unusual media ecosystem — one akin to the current environment in which the language differences are more cultural than literal — offers insights about the mechanics of these competing common senses.

At the IWY conference, the differences in coverage stemmed from reporters’ different language abilities and understanding of the broader context. During the conference inauguration, for example, delegates elected Mexican Attorney General Pedro Ojeda Paullada as conference president, reflecting the UN protocol that the position go to the head of the host country’s delegation. The following day, US feminists — led by NOW founder Betty Friedan — expressed outrage that a man would preside over a women’s conference. The episode generated divergent media narratives. The Washington Post reported, “almost everyone agrees that insult was added to injury when a man … suddenly emerged as president of the conference.” When El Universal conducted a decidedly unscientific survey among conference and tribune participants, it found that 99 percent of Latin American women supported Ojeda Paullada, citing his election as evidence that the conference was being taken seriously.

By the end of the two-week conference, these narratives hardened into the common senses of two distinct camps — a feminist camp that viewed their opponents as trying to undermine their efforts (and possibly in the pay of corrupt and misogynist governments) and a camp that saw US feminists as imperialists trying to impose their priorities on the rest of the world and arrogate to themselves the authority to represent all women. Nearly every episode generated distinct narratives that reinscribed these perceptions; all efforts to reconcile these perspectives came to naught.

In Mexico City, a fantasy prevailed that participants could simply achieve consensus — could unite behind women’s issues apart from broader political forces. But participants lacked a shared understanding because they arrived at this unprecedented gathering with diverse ideas about its objectives. They did not agree on an appropriate president because they did not agree on the office’s purpose.

Over the subsequent decades, however, the conversation shifted dramatically. The Bolivian activist Domitila Barrios de Chungara, the standard-bearer of the anti-feminist camp in Mexico City, emerged as a feminist icon as her widely read testimonio transformed the way we understand feminism. The Jamaican delegate Peggy Antrobus, who thought in Mexico City that feminists were all white, North American lesbians, came to see how some version of feminism might be relevant to her.

Accusations of “fake news” against the distinct narratives that emerge from the New York Times and Fox News reflect not falsehoods per se — not inventions like SCUM or the Comet Ping Pong trafficking ring — but rather the pushing of new understandings into the common consciousness. The solution is not to shoehorn these understandings back into a nostalgia-based, Walter Cronkite-embodied media environment but rather to recognize the ways its exclusions fostered new media and new narratives. A fascinating history lies in the spaces in between.