Putin’s Not Making It Easy, but We Need to Understand How He Views NATO and the US 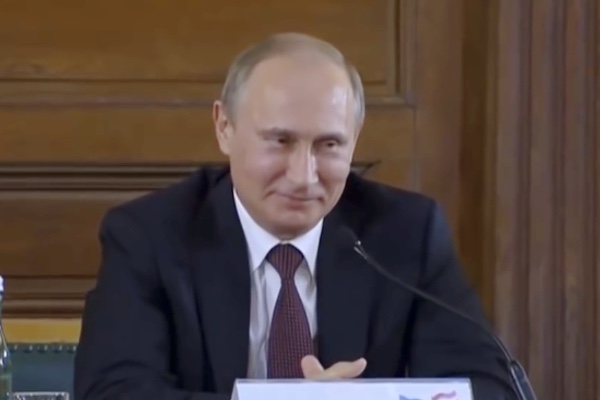 In the past it was always the liberals who were suspected of being too soft on Russia. But already in 2013, American conservative Pat Buchanan wrote in “Is Putin One of Us?” that in “his stance as a defender of traditional values” Putin is very much in tune with U. S. conservatives. In 2016, it was Donald Trump who came under fire for being too much of a Putin admirer. Now there are the FBI and congressional investigations into possible Russian connections with the Trump campaign. Many Democrats and liberals now feel more hostile to Russia (“Putin helped Trump get elected”) than do Republicans and conservatives.

But Democrats should not root for the so-called Trump-Putin “bromance” to explode (over Syria or any other issue) and for relations to deteriorate. There are too many matters—ongoing conflicts in Syria and Ukraine, nuclear dangers, terrorism, the costs of increased military spending, etc.—where Russian-U.S. cooperation could be beneficial.

In earlier essays (while Obama was still president), I suggested that we needed a “new-thinking” Russian foreign policy. That is still the case.

In those articles I suggested that such a policy should be characterized by what Anatole Lieven and John Hulsman in their 2006 book called “ethical realism,” a realism that would reflect knowledge of other countries’ history and culture, prudence, humility, empathy, tolerance, and responsibility.

More recently, Zachary Shore’s A Sense of the Enemy: The High Stakes History of Reading Your Rival's Mind (2014) has emphasized one of the same characteristics, empathy. He refers to it as “strategic empathy,” and he describes it as “the skill of stepping out of our own heads and into the minds of others. It is what allows us to pinpoint what truly drives and constrains the other side. Unlike stereotypes, which lump people into simplistic categories, strategic empathy distinguishes what is unique about individuals and their situation.” Such empathy does not imply agreement or that we should not eventually criticize positions we find faulty or abhorrent. But first we should try to understand them as fully as we can. As Shore writes, “Understanding what truly drives others to act as they do is a necessary ingredient for resolving most conflicts where force is not desired. It is, in truth, an essential first step toward constructing a lasting peace.”

A “first step.” Yes, indeed. Strategic empathy alone will not settle complex Russian-U.S. differences such as those over Syria or Ukraine. It will not suddenly transform Putin into a malleable leader, and it will not insure the genuine security concerns of Russian neighbors like Poland, the former Soviet Baltic republics, or Georgia. But it is “an essential first step.” What must follow are hard-won, principled compromises that do not sell out Ukrainians, Syrians, or any other people, but instead help bring peace to their bloodied lands.

Shore’s viewpoint has lately been gaining adherents. In their excellent Mr. Putin: Operative in the Kremlin, Fiona Hill and Clifford Gaddy write of their indebtedness to Shore’s book, and more recently Gerard Toal writes in Near Abroad: Putin, the West and the Contest over Ukraine and the Caucasus, “I have sought to make an empathetic stretch toward Russian geopolitical culture throughout this work.” He recognizes that “any empathetic presentation of Russian geopolitical discourse in the West today faces social opprobrium,” but like Shore he thinks that empathy best helps us discern the uniqueness of events without implying any agreement or approval. (In his “Political Judgment” the political philosopher Isaiah Berlin also once wrote, “What matters is to understand a particular situation in its full uniqueness.”)

It should be noted, however, that while Mr. Putin and Near Abroad demonstrate what Shore would call strategic empathy, both books also contain ample criticism of Putin while not denying his popularity with the Russian people. But neither book depicts Putin as someone determined to expand Russia to include former Soviet areas, but rather as one laboring to restore his country to great-power status.

In one of the rare encouraging signs regarding President Trump’s foreign policy, he has recently named Fiona Hill to the White House National Security Council as senior director for Europe and Russia. Her co-authored book on Putin suggests that her advice on Russia will be valuable. Such counsel will enhance the opportunity to construct a more empathetic and realistic policy toward Russia than has existed since the end of the Cold War.

Although Trump’s mercurial and narcissistic personality will hinder the formation of such a policy, it is still badly needed. Too often in the past we have fallen back on old clichés and habits of thought that fail to consider the full uniqueness of changing circumstances. In a 2001 essay “Against Russophobia,” Lieven quoted, for example, George Will's 1996 statement that “expansionism is in the Russians' DNA.” In 2014, John Bolton, the former U.S. ambassador to the United Nations (2005-2006), told Fox News that Putin “wants to re-establish Russian hegemony within the space of the former Soviet Union. Ukraine is the biggest prize, that’s what he’s after. The occupation of the Crimea is a step in that direction.” Toal’s recent book (see above) indicates well how such statements are way too simplistic and that the hard reality is much more complex.

We should note that both Will’s and Bolton’s statements, and many others like them, were made in the post-Soviet period, which began with the collapse of the USSR in 1991. Whereas George Kennan’s containment policy, first enunciated in 1947, represented the dominant approach to the Soviet Union during the Cold War, a more aggressive and non-empathetic NATO expansion policy has replaced it in subsequent years. By 2017 much of the former communist-ruled area of Europe—including Poland, Hungary, Bulgaria, Romania, the Czech Republic, Slovakia, Slovenia, Croatia, and Albania—had joined the alliance, as had three former republics of the USSR itself (Estonia, Latvia, and Lithuania). In 2008 NATO’s Bucharest Declaration indicated that two more former Soviet republics could at some point in the future join the organization whose original purpose was to protect its members against Soviet threats. (“NATO welcomes Ukraine’s and Georgia’s Euro-Atlantic aspirations for membership in NATO.  We agreed today that these countries will become members of NATO.”)

To realize how colossally we have failed to empathize with Russian concerns about such expansion, we should imagine how we would feel if Canada and Mexico and say some states that successfully seceded (imagine Texas, Minnesota, and North Dakota) joined a Russian alliance system. Our empathy deficit has been recognized by many leading political thinkers, including some conservative statesmen.

In her The Limits of Partnership: U.S.-Russian Relations in the Twenty-first Century, Georgetown’s Angela Stent approvingly quotes a German official, who accused the United States of “an empathy deficit disorder” toward Russia. In addition, Henry Kissinger (former secretary of state), Jack Matlock (Reagan appointed ambassador to Russia), and Robert Gates (secretary of defense under both George W. Bush and Obama) all have criticized a lack of U. S. empathy toward Russian concerns about NATO expansion. Typical is Gates’s comment: “Moving so quickly after the collapse of the Soviet Union to incorporate so many of its formerly subjugated states into NATO was a mistake. . . . Trying to bring Georgia and Ukraine into NATO was truly overreaching.” (See here for sources of quotes.)

“Fine,” one might say, "but isn’t it naïve to think that any principled compromises can be worked out with Putin?" I don’t think so. In 1938, Winston Churchill, a frequent critic of the Soviet Union, urged an alliance with it (then headed by Stalin) against Nazi Germany. And Churchill was not naïve. And Putin is no Stalin.

To give just one example of how a more empathetic approach to Putin’s Russia might have improved U.S.-Russian relations without harming a Russian neighbor, think of what might have occurred if we had encouraged a neutral status in Ukraine similar to that agreed upon for Austria in 1955. At that point a previously occupied and divided Austria was reunited, and the Austrian people have benefitted ever since in their neutral condition. If the U.S. had pushed for a similar neutral position for Ukraine, as opposed to encouraging aspirations to join NATO, it is possible that Crimea might still be part of Ukraine, civil wars might not have flared up in eastern Ukraine, and thousands might not have been killed and wounded, or more than a million Ukrainians displaced. In such a case the Ukrainian people would not have been sold out, but rather their quality of life enhanced. No small accomplishment.