Churchill’s Lesson: We Shouldn’t Be Afraid of an Alliance with Russia Against ISIS 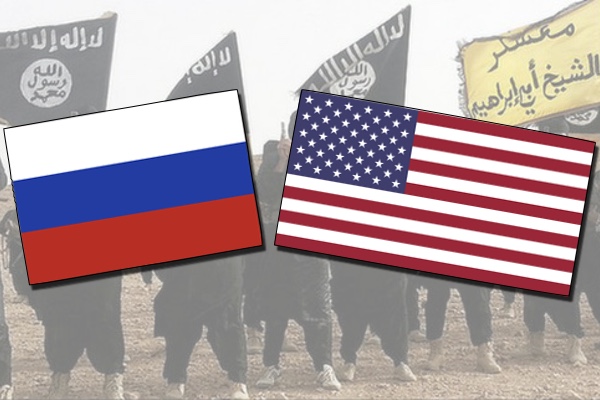 Should we ally with Russia against ISIS? A recent article by the editor of The Nation, Katrina vanden Heuvel, and her husband, historian Stephen F. Cohen, says yes. They mention the terrorist killings of “130 people murdered in Paris on November 13 and the 224 Russians aboard a jetliner on October 31”—yes, despite receiving much less attention in Western media, Russian deaths exceeded French ones by almost a hundred. Both tragedies, they add, “confront America's current and would-be policy-makers . . . with a fateful decision: whether to join Moscow in a military, political, diplomatic, and economic coalition against the Islamic State [ISIS] and other terrorist movements, especially in and around Syria, or to persist in treating ‘Putin's Russia’ as an enemy and unworthy partner.” The essay goes on to note that following the terrorist attack in Paris, “French President François Hollande called for ‘a grand coalition,’ specifically including Russia, against the Islamic State.”

Reading this Nation recommendation reminds me of very similar words coming from Winston Churchill. They appeared in the recently published The Maisky Diaries, where Soviet-ambassador-to-England Maisky recounted a private meeting with him on 23 March 1938. Then still only a prominent Conservative Member of Parliament, Churchill called Prime Minister (1937-1940) Neville Chamberlain, also a Conservative, “a complete ignoramus in matters of foreign policy” for appeasing Hitler. Instead, this most vociferous critic of appeasement advocated “a “grand alliance,” intended “to unite Great Britain, France, the Little Entente [Czechoslovakia, Yugoslavia, and Romania] and the USSR.”

Maisky then quotes Churchill as saying: “I believe that the time of the grand alliance will come. . . . Today, communism does not represent such a danger to the Empire. Today, the greatest menace to the British Empire is German Nazism, with its idea of Berlin's global hegemony. That is why at the present time, I spare no effort in the struggle against Hitler.” From everything we know of Churchill at the time, there is no reason to doubt that he expressed such sentiments to Maisky, who shared his desire for such an alliance.

What makes Churchill’s words especially notable is that from 1917 until the mid-1930s, no major Western politician was as consistently critical of Soviet Russia as him. An excellent three-part article entitled “ ‘The Creeds of the Devil’: Churchill between the Two Totalitarianisms, 1917-1945” by Antoine Capet makes this very clear as he quotes Churchill statements (in italics below) from a wide variety of sources.

In 1917 Lenin returned to Russia “in a sealed truck like a plague bacillus from Switzerland into Russia.” As Secretary of State for War and Air (1919-1921), Churchill supported Allied intervention to support the Whites in the Russian Civil War, hoping to eradicate “the foul baboonery of Bolshevism.” In 1919 he declared, “Of all the tyrannies in history, the Bolshevist tyranny is the worst, the most destructive, and the most degrading. It is sheer humbug to pretend that it is not far worse than German militarism.” In 1927, after meeting Fascist dictator Mussolini, he stated, “If I had been an Italian, I am sure I should have been whole-heartedly with you from the start to finish in your triumphant struggle against the bestial appetites and passions of Leninism.”

Despite these words, Capet writes that by 1935 Churchill’s “visceral anti-Communism was relegated to the background in the face of the mounting danger coming from Nazi Germany. Given the choice between Godless Communism and Godless Nazi-ism, he now found the latter the most obnoxious.” (He did, however, tell Maisky, “If, one fine day, the German fascist threat to the Empire disappears and the communist menace rears its head again, then—I tell you frankly—I would raise the banner of struggle against you once more.”)

But Churchill’s urging of an alliance with the USSR in 1938 was not heeded. In his recent book on the years 1914-1949 in Europe, Ian Kershaw (the distinguished biographer of Hitler) writes that such an alliance, if it could have been effective, would have been the best chance for dealing with the German dictator. But “the deep distrust, as well as embedded detestation, of the Soviet Union, embellished by gruesome reports of Stalin's purges, meant, however, that such a strategy never had a chance of winning the support” of the governments of Great Britain and France.

In November 1938, less than two months after the infamous Munich Conference that betrayed Czechoslovakia and became a symbol of British-French appeasement, Maisky feared that Chamberlain still wished to come to terms with Hitler in hopes of setting Germany against the USSR. In April 1939, when Maisky made a trip to Moscow, he observed that this fear was acutely shared by Stalin and Molotov (soon to replace Maxim Litvinov as foreign minister).

In John Ruggiero’s Hitler's Enabler: Neville Chamberlain and the Origins of the Second World War (2015), he points out that Gallup polls in late 1938 and mid-1939 indicated British citizens were sympathetic to an anti-Nazi alliance with the USSR. So, Ruggiero asks and answers, “why did Chamberlain persist in swimming against the strong tide of public opinion? His was a decision driven by politics rather than the national security, in the warped vision that Socialism was an evil system, worse than Nazism, that must be destroyed.”

Ruggiero also states that Hitler was aware of Chamberlain’s anti-Sovietism and is reported as having said, “The British have the same principles as I do: the first priority is the elimination of Bolshevism.” This scholar’s conclusion: “By Chamberlain’s obstruction of a Soviet alliance, Britain lost its last best chance to avert a war.” (As late as early July 1939, Maisky believed that “were Churchill to enter government today, war could still be averted.”)

Following the most recent terrorist attacks—now including one on 2 December in San Bernardino, California, where one of the attackers pledged allegiance to ISIS—the question is once again, “Who Is the Greater Enemy?” Once again one of the choices is Russia, but now instead of Nazi Germany, we have ISIS and like-minded terrorists.

The Nation’s Vanden Heuvel and Cohen have no doubt: ﻿“The Islamic State (ISIS, ISIL, or Daesh) and its only ‘moderately’ less extremist fellow jihadists are the most dangerous and malignant threat in the world today, having slaughtered or enslaved an ever-growing number of innocents from the Middle East and Africa to Europe, Russia, and the United States (is Boston

forgotten?) and now declared war on the entire West.” And they add, ﻿“This spreading threat cannot be contained, diminished, or, still less, eradicated without Russia.”

But they recognize that most U.S. policymakers and media do not agree. “Overwhelmingly, however, the American political-media establishment—crucially, the Obama administration and Congress—has taken the recklessly myopic editorial position of The Washington Post: ‘An alliance with Russia would be a dangerous false step for the United States.’ ” The Nation authors also criticize such publications as The New York Times and The Wall Street Journal for viewing such an alliance as dangerous, but at least the former paper has more recently printed an opinion piece by the respected scholar Antalol Lieven in which he writes, “The goal that we should be working toward is full military and political cooperation between the West and Russia in order to defeat ISIS and promote a postwar settlement.”

The British newspaper The Guardian takes a similar stance. A 1 December article declares, “The conclusion should be obvious: the threat that Isis poses is similar to the threat that Nazi Germany posed. Coordination between Russia and the west will not guarantee that the battle against Isis is won, but without it that battle will surely be lost.”

Thus, the question for us today is similar to that faced by Churchill and the British, “Which power is the greatest threat?” And “Should we ally with Russia in order to combat another major threat?” Distrust of communist Russia, a la Chamberlain, is no longer a roadblock, but suspicion of “Putin’s Russia” is.

Today’s conservatives are fond of warning us about the dangers of appeasement. At the end of August 2014, for example, British Prime Minister David Cameron warned of “appeasing Putin as we did Hitler.” Specifically, he mentioned the “Anglo-French appeasement” of Hitler at the Munich Conference in 1938. Senator John McCain has often criticized European leaders “for not properly learning the lessons of Munich in 1938,” by which he means we should stand up to Putin as Churchill advocated doing against Hitler in 1938. A source that quotes him has noted that for U.S. “neocons, it’s never not 1938.”

But unmentioned by conservatives is the fact that the greatest critic of appeasement, Winston Churchill, advocated an alliance with Soviet Russia in order to deal with the greater threat of Nazism. History can help us deal with the present, but we must be careful about how we apply lessons from the past. Just cherry-picking quotes and selected actions, while ignoring the larger picture, misleads the public.

In comparing Russia’s experience in Afghanistan in the 1980s to the U.S.’s a few decades later, Rodric Braithwaite, British ambassador to Moscow from 1988 to 1992 and author of Afgantsy: The Russians in Afghanistan, 1979–1989(2011), wrote: "You have to be careful about drawing lessons from history: the gritty details differ every time.” His words reinforce the insight of his fellow-countryman Isaiah Berlin, who was one of the most astute twentieth century thinkers on political wisdom: “What matters is to understand a particular situation in its full uniqueness, the particular men and events and dangers, the particular hopes and fears which are actively at work in a particular place at a particular time.”

Thus, in our own very different times, as compared to 1938, we cannot be sure that Churchill would advise the sort of anti-ISIS alliance advocated by vanden Heuvel and Cohen, or that such an alliance would be the U.S.’s wisest course. Dealing with ISIS, similar terrorists, and the Syrian quagmire is terribly complex, and there are no easy answers. Moreover, Churchill was not always correct in his approach to the USSR (or in other foreign policy areas, such as India).

Nevertheless, his advocacy of an anti-Nazi “grand alliance” between Western powers and Soviet Russia in 1938 and beyond should at least prevent us from simplistically and unreflectingly rejecting as appeasement any joint, coordinated effort with “Putin’s Russia.” Is it not possible to remain guarded and wary of Russian intentions, as Churchill did, and still ally with it against a greater enemy? Would a Western-Russian alliance against ISIS really be contrary to the spirit of that epitome of anti-appeasement, Winston Churchill?