Dr. Jeanne Petit is a professor of history at Hope College in Holland, Mich. 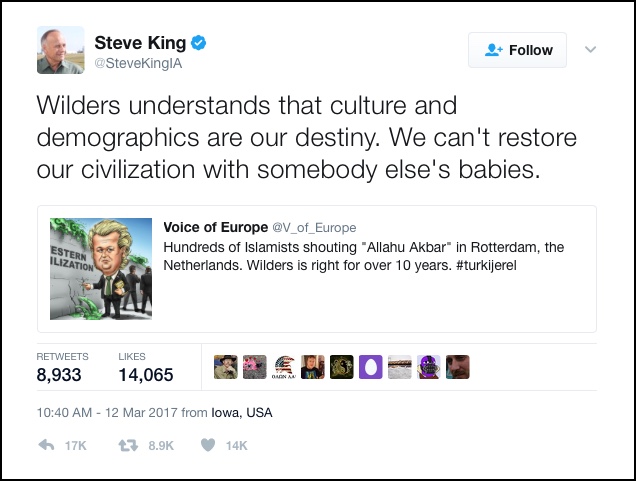 Recently, Representative Steve King of Iowa wrote a tweet in which he claimed that “we can’t restore our civilization with someone else’s babies.” While he doesn’t say who “our” and “someone else” is, it is obvious he is arguing that certain immigrants cannot fit into the United States and preserve its civilization. King’s claim, while provocative, is not new. Since the nation was founded, Americans have questioned how to integrate immigrants into the nation. Like most Americans, I can see places where these debates interacted with my own family’s history.

Americans like to think that their ancestors quickly learned English and conformed to the dominant culture. That was not true for many including my great, great grandfather, David Lanoue, a French Canadian who migrated to the United States in the 1840s. Driven from Quebec by poor economic conditions and ill-treatment by Anglo Canadians, he helped found the Illinois town of L’Erable (French for “the maples”). He and his fellow immigrants saw the United States not as a place to have a new start but instead as a place to preserve their language, culture, and faith. French, not English, continued to be the language spoken and taught there through the early 20th century. as in many other Midwestern immigrant settlements.

Catholic immigrant communities like these alarmed many mid-19th century native-born Americans. Lyman Beecher warned in his 1835 book, A Plea for the West, that the Pope claimed “authority over the conscience of Catholics” and would command his followers to vote away American democracy and institute papal rule. Fifteen years later, this fear found political expression in the Know Nothing Party, which gained great popularity in the 1850s. Their platform called for a 21-year waiting period for citizenship and would deny the right to hold office to anyone who had loyalty to a “foreign prince, potentate, or power,” meaning all Catholics.

Post-Civil War Republicans promoted immigration as a positive economic force for industry and national expansion, but during a depression in the 1890s many Republicans, particularly Massachusetts Senator Henry Cabot Lodge, blamed immigrants for the economic turmoil. Lodge also took the debate in a new direction—on the Senate floor in 1896, he proclaimed that the rising number of immigrants from southern and eastern Europe were “of a totally different race origin” than the traditional American, and then warned, “If a lower race mixes with a higher in sufficient numbers, history teaches us that the lower race will prevail.”

It was around this time that my great grandmother, Stephania Zyzniekski Talaiko, arrived in the United States. In our family lore, we tell of how Stephania came to Chicago, alone, at the age of 18. She married and supported her family by working nights cleaning an office building while her young daughter slept in another room. She lived well into her nineties and barely spoke any English, though her children would grow up to learn English, marry native-born Americans, fight in World War II and have children of their own.

Rather than regard women like her as models of resilience and hard work, many influential Americans worried she would debase the American “stock” through her “breeding.” In 1914, prominent sociologist E.A. Ross wrote The Old World in the New in which he described the inferiority of southern and eastern European immigrants: “It is unthinkable that so many persons with crooked faces, course mouths, bad noses, heavy jaws and low foreheads can mingle their heredity with ours.”

And again today, we are grappling with the question of who can get into the nation, and in the process, we are debating who we are as a nation. My family has gone on to have children with the descendants of Irish, Italian, Japanese, Greek, and Lebanese immigrants—all groups that have been attacked as a threat to American civilization. Their babies will continue to figure out how we will live up to our national motto E Pluribus Unum.