Trump Got You Down? Here’s Inspiration. 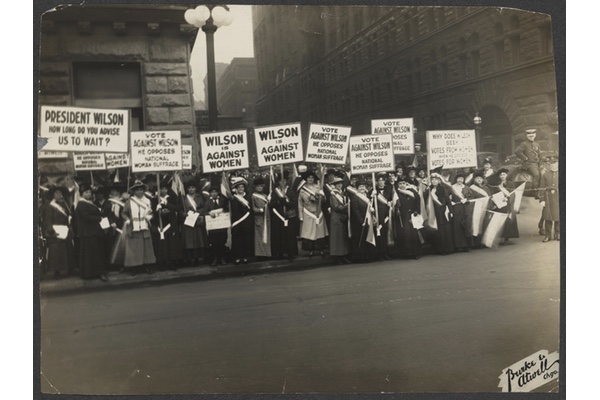 This year’s divisive Presidential election has left citizens voicing uncertainty about their right to life and liberty and their pursuit of happiness. Although elections inevitably leave some people feeling disappointed, the distress is not subsiding in December 2016. People fear what President-elect Donald Trump might do (or undo) regarding human rights. I see college students crying, Pakistani restaurateurs threatened and friends too depressed to read the news. 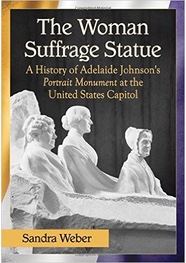 I sense a vibe of hopelessness: an atmosphere quite similar to one a hundred years ago. I believe the women and men of 1916 can be our guidepost.

Back then, the National Woman’s Party campaigned against President Woodrow Wilson because he refused to support a federal woman suffrage amendment. “He kept us out of war,” yes, but the women retorted, “He kept us out of suffrage.” Many members of the National American Woman Suffrage Association became Hughesettes, campaigning directly for Wilson’s opponent, Charles Evans Hughes of New York. Speakers from both suffrage organizations headed west in special railroad cars to appeal to women in equal suffrage states to show that women stand by women. Despite their efforts, Wilson swept the election.

Women could claim only minimal success. Wilson won by less of a margin in 1916 than in 1912 and for the first time, a major Presidential candidate (Hughes) had vowed to support equal suffrage at the federal level. A century later, there was also some history-making: a major party nominated a woman for presidential office and a woman won the popular vote. Yet in both elections, the disappointing thwack to women’s rights annihilated any joy.

Feelings of agony extended beyond the election in 1916. The beloved woman who relentlessly campaigned across the country for the National Woman’s Party had collapsed during a speech and lay seriously ill from severe anemia in a California hospital. The vivacious Inez Milholland Boissevain, who had asked President Wilson “how long must women wait for liberty,” never got an answer. She died at age 30 on November 25, 1916.

Suffragists lowered the flag to half-mast as they grieved the loss of the brave, devoted soldier. Suddenly the world seemed so cruel, especially to the younger activists. They felt hopeless and wondered what to do.

Vida Milholland, Inez’s younger sister, said that Inez would not want them to mourn but to do something to make the world better. The tragedy became a rallying call. Memories of Inez provided inspiration. Memorial celebrations for Inez produced resolutions of action.

I believe Inez Milholland delivers another rallying call, a century later. Her words and the words spoken at her memorials still resonate and light a pathway for us today.

Though the press labeled Inez “the most beautiful suffragette,” her friends declared that she had a beautiful brain and heart and was not just a suffragist, she was “a great public spirited citizen.” At a memorial held at Cooper Union in New York City on December 21, 1916, speakers praised her advocacy for feminism, for civil rights for blacks, and for humane treatment of inmates. Inez hated inequality. She hated shams and hypocrisy. She loved truth. “It burned in her like a flame,” said Max Eastman. “What Inez showed us was that it is possible to have a glorious time and stand like iron for truth.”

Obstacles inspired Inez, discouragement urged her on. She loved work and she loved battle. She loved life and laughter, and above all, she loved liberty.

The National Woman’s Party, which excelled at publicity and pageantry, organized a memorial on Christmas Day 1916 in Statuary Hall, where never before had a memorial been held for a woman. There, in the United States Capitol, the house of democracy, people paid tribute “to one who gave up her life to realize that democracy.”

"Inez Milholland was the flaming torch that went ahead to light the way,” said Maud Younger. “With new devotion we go forth, inspired by her sacrifice, to the end that her sacrifice be not in vain.”

These women and men gathered to do more than mourn and praise, they came to the government’s house to show the need for responsibility. They passed a resolution to appeal to the Administration for action so that by her death Inez Milholland would have delivered liberty for her countrywomen. It also quoted Inez's words: "Don't dare to say you are free until all women are free."

A group of 300 women brought the resolution to President Wilson on January 9, 1917. Surely, Wilson would feel compelled to support suffrage after the shock of Inez’s death. Instead, he rebuked them, gave a defiant glance, and left the room. His attitude enraged the women; they were tired of asking and waiting. That evening they devised a new tactic and the next morning women stood silently on the sidewalk in front of the White House holding suffrage banners.

The Silent Sentinels returned day after day. On Inauguration Day, March 4, 1917, hundreds of women marched, one carrying the banner which Inez bore in a suffrage parade in New York: Forward, out of error, Leave behind the night, Forward through the darkness, Forward into light.

After the U.S. joined World War I, many believed the pickets were unpatriotic and the women were often booed and pushed. Before long, the police began arresting and jailing the picketers for “obstructing the highway.” In October 1917, seven of the jailed women staged a hunger strike to protest their unjust treatment. Officials force-fed them by shoving a tube down their throats and then pouring in liquid. Eventually, public outrage forced prison officials to release the women. It took more protests and more arrests before President Wilson pledged support for a federal suffrage amendment, which was eventually ratified in 1920.

What can be learned from the events of 1916 and 1917? Just as suffragists held Wilson’s administration accountable in 1917, we can hold Donald Trump’s administration accountable for any violation of human rights or women’s rights. The goal is not to produce a martyr or arouse violence or trigger arrests. The objective is to find the strength and courage to take up the struggle, to consecrate oneself to the cause of human rights, to never turn back, to go forward with new devotion and new faith.

A hundred years ago, the members of the National Woman’s Party felt they had nothing to rely on except their spirits and the vitality of their faith, but they proclaimed, “spirit is invincible.” And it is contagious. Today, we can have a glorious time, as Inez did. We can sing songs and plant seeds and laugh—but also stand like iron for truth and kindness.