The Other Slavery: An Interview with Historian Andrés Reséndez

Robin Lindley is a Seattle-based writer and attorney. He is features editor for the History News Network (hnn.us), and his work also has appeared in Writer’s Chronicle, Crosscut, Documentary, NW Lawyer, Real Change, Huffington Post, Bill Moyers.com, Salon.com, and more. He has a special interest in the history of human rights and conflict. He can be reached by email: robinlindley@gmail.com. 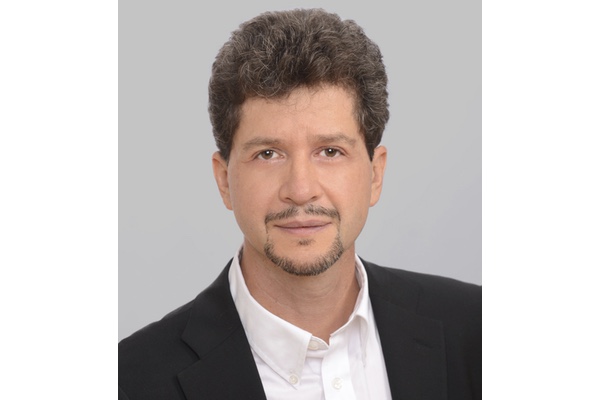 Indian slavery never went away, but rather coexisted

with African slavery from the sixteenth century

all the way through the late nineteenth century.

Andrés Reséndez, The Other Slavery

From first contact with the New World in 1492, Europeans brutalized and enslaved the indigenous people. This exploitation of the Native peoples throughout the Americas continued in many forms for the next four centuries and provided a model for the notorious subjugation of Africans. 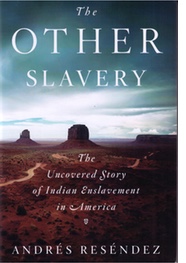 Historian Andrés Reséndez recounts this cruel, complex and largely overlooked history in his groundbreaking book The Other Slavery: The Uncovered Story of Indian Enslavement in America (Houghton Mifflin Harcourt), a 2016 finalist for the National Book Award for Nonfiction. He chronicles the evolution of Indian slavery from the time of Columbus through the days of onerous “debt peonage” in the late nineteenth century when Indians in the United States were not yet citizens and did not enjoy the protections against slavery and involuntary servitude guaranteed for African Americans after the Civil War.

The Other Slavery takes the reader from the abuse of Indians in the mines and on the plantations of early Spanish colonies to the takeover of this European enterprise by Native slavers who spread slavery across Mexico and the Southwestern United States.

Over the centuries, slavery of indigenous peoples appeared in different guises, as Professor Reséndez writes, but this odious practice was inevitably characterized by forcible removal of the victims from one place to another; inability to leave the workplace; violence or threat of violence to compel work; and nominal or no pay. He estimates that between 2.5 and 5 million Native Americans were enslaved between the time of Columbus and 1900.

Professor Reséndez generously responded by email to a series of question on The Other Slavery.

Robin Lindley: What inspired your new book on the enslavement of the Indians of the Americas? Did your research grow out of your previous book on Spanish explorer Cabeza de Vaca?

Professor Andrés Reséndez: Yes, this is the typical case of one book leading to another. Cabeza de Vaca and the other survivors of the Florida expedition were enslaved by various Native groups on the coast of Texas for a period of six years. Indian slavery was thus central to this story and prompted my initial interest. But the episode that impressed the most occurred once the castaways fled their captors and walked across North America. As it turned out, the first Europeans that they ran into were none other than a group of Spanish slavers. This cavalry unit, tasked solely with finding Indian prey, constituted the cutting edge of the Spanish empire as it expanded from central Mexico to the north. Indian slavery—whether Indian-on-Indian or European-on-Indian—had clearly been a central motive of the early imperial experience in the Americas; and I wished to learn more.

Robin Lindley: What was your research process on your expansive study of more than 400 years of American history? I understand you traveled a great deal.

Professor Andrés Reséndez: Originally, I intended to write a book about Indian slavery focusing exclusively on northern Mexico during the sixteenth century. But as I kept reading the literature and collecting sources, I caught glimpses of a much larger story. Somehow, I persuaded myself that the best service to the profession would be to offer a broad but detailed story of the system of Native enslavement that unfolded in North America from Columbus to the end of the nineteenth century.

Robin Lindley: Primary sources on the Indian view of enslavement must be very limited. As a historian, how do you deal with a scarcity of Indian sources, particularly documentary evidence?

Professor Andrés Reséndez: Because the Spanish Crown prohibited Indian slavery practically since the beginning of colonization, masters and colonists took pains to disguise their activities and resort to euphemisms and subterfuges. However, if one understands the logic of the system and knows where to look, there is a significant paper trail in many regions of the Americas and running from the sixteenth through the nineteenth centuries.

Robin Lindley: It may surprise some readers that Columbus immediately considered enslaving the Native people he came upon in 1492. What did you learn about the perspective of Columbus on this new land and its people?

Professor Andrés Reséndez: Columbus was not only a great explorer but also a merchant. Ten years before his great voyage of discovery he had sailed along the coast of Guinea and visited the fort of São Jorge da Mina, the first European fortress and trading post in sub-Saharan Africa. The Portuguese had built the fort one or two years before Columbus’s visit to protect their claim to the trade in what is now the coast of Ghana. At the time of Columbus’s visit, the fort was new and the resident merchants conducted a diversified trade mostly in gold dust but also in copper, ivory, salt, and slaves. São Jorge da Mina was still far from becoming one of the most important slaving depôts of West Africa—the infamous Elmina as it was known in later centuries, a corruption of the original Portuguese name—where the slaves bound for the New World were kept before crossing the Atlantic. But even in its early days Columbus could observe how a European stronghold in another continent could thrive by trading a variety of products, including humans.

Robin Lindley: The Spanish aristocracy, including King Ferdinand and Queen

Isabella in the 1490s, opposed slavery in the New World. How do explain their reservations in a world where enslavement of people by many Europeans was accepted practice?

Professor Andrés Reséndez: The Iberian kingdoms had a long tradition of merely tolerating but not encouraging slavery. For instance, a thirteenth-century legal compendium known as las siete partidas or the seven books already regarded slavery as “the most wretched condition into which anyone could fall” and allowed slaves to act in court to lessen their sufferings. For example, in cases of cruel or abusive masters, “a slave may complain to the judge who will need to find the truth, and if so, the slave will be sold to a different master.” Given this initial context, it is not surprising that the enslavement of Indians became controversial within the Spanish empire. Queen Isabella in particular emerged as an early champion of Native Americans and even opposed Columbus when the Admiral kept sending Indian slaves back to Spain.

Robin Lindley: How did enslavement of Indians compare with that of African Americans? A simplification, but it seems that slave owners who exploited Indian labor preferred to own Indian women and children, and those who owned black slaves preferred males.

Professor Andrés Reséndez: In contrast to African slavery which targeted mostly adult males, the majority of Indian slaves were women and children. This preference was often reflected in the sale prices as Indian women could be worth up to 50 or 60 percent more than males. What exactly explains this significant and persistent price premium for women? Sexual exploitation and women’s reproductive capabilities are part of the answer. In this regard, Indian slavery constitutes an obvious antecedent to the sex traffic that occurs today. But there were other reasons too. In nomadic societies, males specialized in activities less useful to European colonists such as hunting and fishing than Native women’s traditional roles in weaving, food gathering, and child rearing. Some early sources also indicate that women were considered better suited to domestic service as they were thought to be less threatening in the home environment.

And just as masters wanted docile women they also showed a clear preference for children. Children were more adaptable than grownups, learned languages more easily, and in the fullness of time could even identify with their captors. Indeed, one of the most striking features of this form of bondage is that Indian slaves could eventually join the dominant society.

Unlike African slavery, which was a legally defined institution passed down from one generation to the next, Indian slaves could become menials, servants, and with some luck attain some independence and a higher status even in the course of a lifespan.

Robin Lindley: How did Indians come to take over the business of selling indigenous people as slaves?

Professor Andrés Reséndez: Prior to contact Native Americans had practiced various forms of captivity and enslavement. When Europeans arrived, they began by offering captives and slaves to them. At first, Native Americans occupied subordinate positions, serving as guides, informants, intermediaries, guards, and sometimes as junior partners but generally dependent on markets and slaving networks controlled by the newcomers. Europeans had the upper hand because of their superior warfare capabilities, especially horses but also firearms. However, as Natives acquired horses and firearms of their own, this enterprise gradually passed into their hands as some groups became independent providers of captives.

By the eighteenth and nineteenth centuries powerful equestrian societies in North America like Comanches and Utes had taken control of much of the traffic and became regional suppliers of slaves to other Indians as well as to Spaniards, Mexicans, and Americans.

Robin Lindley: How does the history of Indian enslavement resonate now as we face modern slavery and human trafficking?

Professor Andrés Reséndez: Today many scholars and activists talk about the “new slavery,” that is, new forms of bondage in which formal ownership has been replaced by other mechanisms such as indebtedness or kidnapping and that affects not just one particular race but all races. Currently, the Walk Free Foundation provides yearly estimates of the number of slaves (45.8 million is the latest number) around the world and ranks over 160 countries according to the prevalence of slavery.

Two thoughts come to my mind. First, it seems to me that the emphasis on the newness of the contemporary forms of bondage is misguided. By placing the emphasis on the newness of this phenomenon, we tend to underestimate its staying power and extraordinary adaptability. This phenomenon is not something that began in the aftermath of World War II or with the economic liberalization of the 1980s and 1990s but has been with us for centuries.

Second, what I call “the other slavery” resembles the so-called “new slavery” in that it is not a single institution but a series of related practices. The Spanish Crown began by prohibiting Indian slavery in 1542, and this ban gave rise to number of subterfuges and euphemisms meant to get around the law. In other words, formal slavery was replaced by multiple forms of informal labor coercion and enslavement that were extremely difficult to eradicate.

This same observation remains true today: formal slavery is prohibited practically everywhere in the world, yet there are multiple practices of human bondage and trafficking that are uniquely tailored to each market and region of the world. The long experience of Native Americans shows that this variability of practices, supremely adapted to each social and legal context and region, is one of the defining characteristics of this other slavery.

Robin Lindley: Thank you for your thoughtful comments Professor Reséndez and for your groundbreaking new book.