Donald Johnson teaches early American history at North Dakota State University, where his research focuses on popular politics during the Revolutionary era. The views expressed here are entirely his own and do not represent those of the University in any way. 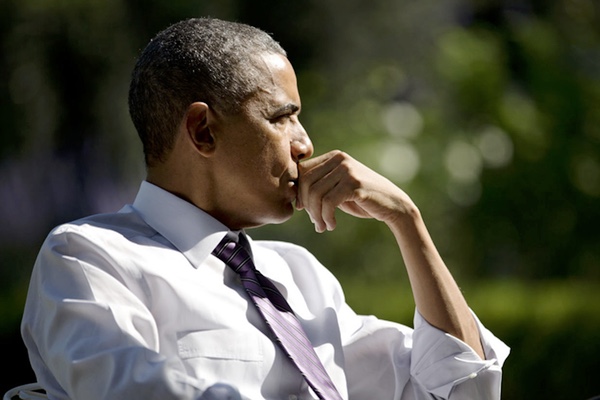 In February of 1801, President John Adams faced much the same dilemma that Barack Obama faces now. Under the Federalist regimes of Adams and his predecessor, George Washington, the United States had made a great deal of progress in certain areas. The young nation had established the supremacy of the Federal courts over those of the states, reformed a defunct financial system, rebuilt the US military, and, perhaps most impressively, managed to remain neutral in the wars of the French Revolution that, under the ascendant tyrant Napoleon Bonaparte, were quickly spreading across Europe, the Caribbean, and Latin America. Yet despite these accomplishments, the election of 1800 saw Adams and his party swept out of office by massive margins in favor of Thomas Jefferson’s Democratic-Republicans, who promised an end to Federal control over finance, strengthening of states’ rights, and a pro-France foreign policy that threatened to engulf the still-fragile young Republic in an emergent world war.

In the face of this over-whelming electoral catastrophe, Adams worked swiftly to ensure that the Federalist legacy could survive. In the two weeks between Jefferson’s election on February 17, and his inauguration on March 4, the lame-duck president spent his days and nights appointing judges, tax collectors, diplomats, and other public officials from his own party, who, once approved by the out-going Federalist Congress, could stand as a bulwark against Jeffersonian populism. These measures, which have gone down in history as Adams’s “midnight judges,” enjoyed mixed success. Still, because of his efforts, the Federal judiciary and customs service continued to enforce Federal laws over states’ rights through the next two decades of Democratic-Republican rule, prevented the Jeffersonians from dismantling the Federalist tax collection system, actually strengthened the army, and forced the pro-France regime to remain neutral in the world, aside from the spectacular but relatively fleeting War of 1812.

While Obama does not have the friendly Congress that Adams had in 1801 to stock the Federal judiciary and bureaucracy, the lame-duck president nevertheless has the power to cement his legacy in the eight weeks remaining before President-elect Trump’s inauguration on January 20, 2017. What follows are five areas where Obama can and should act to secure some of the progressive gains his administration has made, and to thwart efforts by Donald Trump’s incoming administration to pursue its xenophobic, militaristic, and authoritarian agenda.

1. Ramp up Detainee Transfers and Releases at Guantanamo Bay. Despite it being one of his earliest campaign promises, the president has yet to close the military detention center at Guantanamo Bay, Cuba. Much of this is due to the continuing war on terror and Congress’s refusal to allow him to close the prison. .Still, over the past few years the administration and independent defense attorneys have made progress releasing and transferring prisoners, and as of this writing only 60 prisoners remain in Cuba. The president should ramp up these efforts, using Justice Department lawyers to aid defense attorneys and already working to free or transfer detainees, so that when Trump takes office as few as possible remain, leaving the facility an empty shell.Doing so will deprive the future Trump administration of an important symbol for his proposed expansion of the War on Terror and strike a blow against the President-elect’s proposed return to the illegal torture policies of the second Bush administration.

2. Demilitarize State and Municipal Police. Obama has already ordered the Department of Defense to limit its sales of surplus military equipment to state and local police forces. The president can go further, however by stopping this program altogether, and could go even further by enforcing training and maintenance regulations to take weapons already transferred out of the hands of police who abuse them. Such a move, while perhaps reversible in the long run by a Trump administration, would at least keep open a debate that that has raged over the past eight years on the over-reach of police power, and in the short term would deprive the Trump administration of a powerful tool in his agenda of fear and repression against immigrant and minority communities.

3. End the Crisis at Standing Rock. While the president and his Army Corps of Engineers have begun to consider re-routing the Dakota Access Pipeline to avoid potential contamination of Native American water resources, violent confrontations continue between police and a vast coalition of Native American protesters, or water protectors, at the Standing Rock Sioux Reservation south of Bismarck, North Dakota. By law and precedent, the president has the authority, and the Constitutional responsibility, to intervene in disputes between states, private entities, and sovereign tribes. Obama should use this power to nationalize the North Dakota National Guard to protect protesters from the attack dogs, tear gas, and rubber bullets unleashed by out-of-control state and private security forces. Further, he should urge regulators to deny oil companies permission to build the DAPL on Army Corps of Engineers land, and to enforce the Sioux interpretation of the 1851 treaty that granted much of the land in dispute to the tribe. In the face of an oil-friendly Trump administration hostile to both Native American and environmental issues, such a move would set any pro-petroleum agenda back while setting a strong precedent for the Federal protection of Native lands.

4. Begin the Process to End Marijuana Prohibition. As of the 2016 elections, 20% of Americans live in states where recreational marijuana is legal for recreational use, and more than half of the states of the Union allow doctors to prescribe Marijuana to treat illnesses and chronic conditions. Still, the substance remains illegal at the Federal level. In the face of these electoral victories and numerous studies proving marijuana’s efficacy, Obama should urge Attorney General Loretta Lynch to begin the process of removing marijuana from the “Schedule 1” category of especially dangerous substances – an authority granted her under the 1970 Controlled Substances Act. Although such a move would require lengthy regulatory hearings, filings, and a bureaucratic process that probably will not be complete by the time Trump takes office, setting it in motion would discourage Trump’s Justice Department, which portends to be fiercely anti-marijuana under most of the leading candidates for Attorney General, from prosecuting people for using a substance legal in most states, at least until Congressional action can end prohibition once and for all.

5. Pardon Low-Level Drug Offenders and Non-Violent Felons. Perhaps the most powerful statement Obama can make is a mass pardon of low-level drug offenders and non-violent felons in Federal prisons . As of September 2016, over 83,000 people, mostly Black and Latino/a, were serving sentences in Federal correctional institutions for drug offences, most of which are non-violent crimes with sentences imposed by mandatory minimum laws passed in the 1990s and early 2000s. These make up 46% of the Federal prison population. If Obama were to use his executive power to pardon even a quarter of these inmates, it would make a powerful statement against a Trump administration that has promised to ramp up aggressive enforcement of drug and immigration laws and whose business connections have already begun to strengthen the prison-industrial complex.

While these moves may not be as dramatic as Adams’s “Midnight Judges,” President Obama’s actions in these areas and others would still help preserve some of his progressive legacy in the face of impending conservative control of all three branches of government. Further, it would give hope to the majority of Americans who voted for those progressive policies to continue and to grow. And, even though Obama sixty-five days left in office to Adams’s eleven, the clock is ticking.