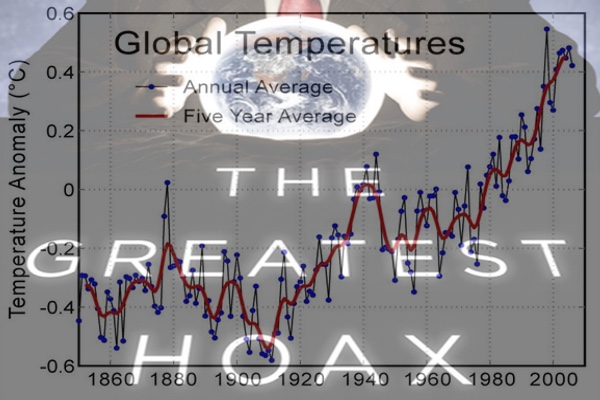 Our country faces a big problem. In January 2015, the author of The Greatest Hoax: How the Global Warming Conspiracy Threatens Your Future, Republican Senator James Inhofe (Okla.), once again becomes chairman of the Senate committee overseeing our government’s response to global warming and climate change.

In a 2009 essay I mentioned the overwhelming consensus of world scientists affirming the existence of human-caused global warming. Today the evidence is even stronger. Yet, deniers like Senator Inhofe will not go away. Why?

As historians we believe that to deal with present problems, we must understand their roots, their history. How then can history help us understand the tenacity and power of climate-change deniers like Sen. Inhofe?

First, this type of denial is nothing new. As pointed out in my 2009 essay, where the evolution controversy surrounding the 1925 Scopes Trial is mentioned, “humans and other living things have evolved over time and . . . evolution is the result of natural processes such as natural selection.” But according to a 2009 Pew poll, while 87 percent of U. S. scientists affirmed this statement, only 32 percent of the U. S. public did.

Secondly, decades ago historian Richard Hofstadtermade it clear that subconscious factors like status seeking, anti-intellectualism, fear, and paranoia motivated U. S. voters more than did truth-seeking. More recently Dan Ariely, in his book Predictably Irrational: The Hidden Forces That Shape Our Decisions, demonstrates the “many ways in which we are all irrational.”

HNN recently posted a condensed version of historian Walter Laqueur’s “Putin and the Art of Political Fantasy.” In the full version of the article, Laqueur deals with Russian believers of conspiracy theories and asks how do we “explain the fact that quite often deliberate falsehoods are sincerely believed?” He perceives a “striking similarity between clinical and political confabulation: the deep conviction of the confabulators that they are speaking the truth . . . . It is, to repeat, by no means a specific Russian phenomenon.” He concludes that “some undoubtedly did know better but regarded their specific narrative as a useful tool with which to disseminate their ideas. Others may believe that while not everything about their theories or doctrines may be true, they may be partly correct, enough in any case to circulate them widely. Or they may believe that while there is no proof at all that the theories are true, they could be true, or something quite similar could be true.”

What this reader of Laqueur’s essay concludes is that truth-seeking is less important to the conspiracy believers than a variety of other motives. That is the main reason why global-warming deniers like Sen. Inhofe remain powerful, why such denial will not go away. And note that his book refers to the “Global Warming Conspiracy.” The leading U.S. political spokesperson for global warming denial is not just denying, but sees a conspiracy behind what many of us conclude is simply a factual statement—“human-caused global warming exists”—grounded in science and reason.

Who, besides Sen. Inhofe, are these believers in “the global warming conspiracy”? According to a 2013 “Conspiracy Theory Poll” conducted by a respected polling agency, “Republicans say global warming is a hoax by a 58-25 margin, Democrats disagree 11-77, and . . . . 61% of Romney voters believe global warming is a hoax.” In May 2014, politifact.com checked out California Governor Brown’s claim that few Republicans in Congress accept human-caused climate change, and could find only 8 out of 278 who admitted that it existed.

As Laqueur indicated in his piece on Russians advocating conspiracy theories, self-seeking motives sometimes come into play. If Republicans wish to get reelected but express a belief in global warming, they may be unable to turn back primary challengers who are “deniers.” In the case of a major funder of many such deniers, the Koch brothers, self-interest is obviously a factor given the fact that their energy businesses each year spew millions of tons of greenhouse gases into the atmosphere. But such self-interest is not the only cause of ignoring the claims of science and reason.

In his persona of being a conservative supporter of President Bush, Stephen Colbert in his 2006 speech at the White House Correspondents Dinner(text here)brilliantly captured the mindset of many Republican supporters, including climate change-deniers. He said that he and the president were not brainiacs on the nerd patrol. We're not members of the factinista. We go straight from the gut, right sir? That's where the truth lies, right down here in the gut. . . . I speak straight from the gut, OK? I give people the truth, unfiltered by rational argument. I call it the ‘No Fact Zone.’” Anti-intellectualism, contempt for “brainiacs,” nerds, pinheads (as Bill O’Reilly likes to call professors), and brushing aside facts and rational argument—it’s all there in Colbert’s remarks.

But contrast this with Al Gore’s statement in his 2007 book The Assault on Reason: “Americans in both parties should insist on the reestablishment of respect for the rule of reason. The climate crisis, in particular, should cause us to reject and transcend ideologically based distortions of the best available scientific evidence.” But mention Al Gore’s statement to a denier, and more often than not the denier’s reply will attack Gore’s personality, not what he writes about reason and science.

President Obama, whom many deniers loath, has also been accused of being too professorial, too much of an elitist. Historian John Summers has mentioned that Obama inclines toward respect for a “politics of reason,” while conservatives have turned more toward recognizing that “unconscious emotional drives . . . belie the image of the rational citizen.”

The president has perhaps been naïve in believing that a politics of reason is possible, but is he not correct in thinking that we should at least strive for such a politics? Truth-seeking may be less important to most people than a whole host of other factors such as their instincts (gut), beliefs (political or religious), self-image, lifestyle, or what their friends think. But should we still not point to the ludicrousness of Sen. Inhofe becoming the Senate’s leading voice regarding climate control? Should we not, borrowing words from the poet Dylan Thomas, “Rage, rage against the dying of the light”—the light of reason and science?

As R. B. Bernstein reminds us in The Founding Fathers Reconsidered such a light shining forth from the trans-Atlantic Enlightenment was highly regarded by some of our Founding Fathers, men like John Adams, Benjamin Franklin, Thomas Jefferson, Alexander Hamilton, James Madison, and Thomas Paine. Columnist E.J. Dionne Jr. recently wrote that “many kinds of conservatives contend that everything they believe is thoroughly consistent with the views and intentions of our 18th-century Founders.” How wrong they are regarding respect for reason and science!