The Awful History Behind Rep. Steve King’s Obnoxious Claims about “Subgroups” (That is, Blacks)

Scott Eastman, associate professor of history at Creighton University in Omaha, is the co-editor of “The Rise of Constitutional Government in the Iberian Atlantic World.” 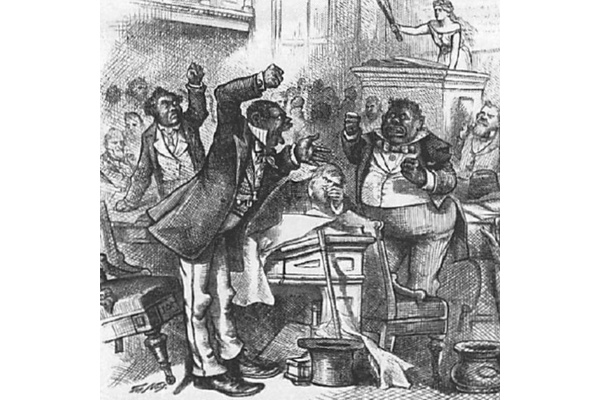 Racist view of Reconstruction, when blacks were elected to state legislatures in the South

As a scholar who spends a great deal of time teaching undergraduates about slavery and race at a Midwestern university, I have a hard time disentangling Iowa Representative Steve King’s comments, aired on live television this week, from the words of some of the most prominent racial theorists of the nineteenth century. Writing in the 1850s, the Frenchman Count Arthur de Gobineau cavalierly stated: “Such is the lesson of history. It shows us that all civilizations derive from the white race, that none can exist without its help.”

I assign an excerpt from Gobineau’s The Inequality of Human Races every semester in a course called “Conquest, Piracy, and Slavery.” My argument is simple: race and racism must be placed at the center of any analysis of African, European, and American history (what is now called Atlantic history). We know founding fathers, especially Thomas Jefferson, stumbled on issues relating to slavery, race, emancipation, and equality, and many held slaves themselves. I reproduce his vitriolic, hate-filled tract and discuss it with a classroom full of students because works by the likes of Gobineau were extremely influential by the advent of the 20th century and found on the shelves of Adolf Hitler’s library.

King, speaking earlier this week during an appearance on MSNBC, posed the following question, echoing the central premise put forward by Gobineau: “I’d ask you to go back through history and figure out, where are these contributions that have been made by these other categories of people that you’re talking about, where did any other subgroup of people contribute more to civilization?” He quickly clarified that he was conflating civilization with “Western Civilization” and its Christian roots that had spread from Europe across the Atlantic to the United States. King shocked the host Chris Hayes by essentially denying that non-whites, or subgroups to use his parlance, have contributed to the culture of the “West.” Hayes cut the segment rather than using it as a teaching moment, a decision he later appeared to regret.

King’s assertions beg the question of what constitutes “whiteness?” And, what exactly is the West—where does it begin, and where does the Orient, or the East, end? Is the West a geographical site on a map or a set of culturally coded values and beliefs? These certainly are complex matters. On the other hand, it’s not hard to refute King and his baldly racist, ethnocentric claim. It would be facile to list the advancements made during the so-called Islamic Renaissance in mathematics (algebra), medicine, and philology, or to recite Chinese technologies from moveable type and the printing press to cannons, clocks, compasses, and shipbuilding that far outstripped Renaissance European triumphs, not to mention the innovations brought to the United States by immigrants from all over the world over the last several centuries.

Steve King casually wields the language of the white supremacist. This is not the first time he has courted controversy on the subject of race in America: he single-handedly attempted to prevent Harriet Tubman from appearing on the $20-bill, and continues to have a Confederate flag at his desk in Washington. But what’s most important is to try and understand how an elected representative to the United States Congress can draw from the same font as Klansmen hearkening back to an age of pure-blooded Aryan supermen. How do his linguistic choices reinforce his tremendous political power? Subgroups, inferior races, savages, natives—these are all code for non-whites, routinely disparaged and dismissed in the Darwinian Age.

Gobineau believed that science, specifically phrenology, had proven the inferiority of all the groups who fell below the category of white European on his racial pyramid, and he posed this question: “Do all men possess in an equal degree an unlimited power of intellectual development?  In other words, has every human race the capacity for becoming equal to every other?  The question is ultimately concerned with the infinite capacity for improvement possessed by the species as a whole, and with the equality of races…. I deny both points.”

This is precisely the rhetoric that Hitler picked up on as he articulated the racial ideology that would define National Socialism in Germany, and, tragically, it now has become increasingly commonplace in our political discourse as the race for the White House heats up this summer.