The Appalling Violence of the World’s Three Superpowers 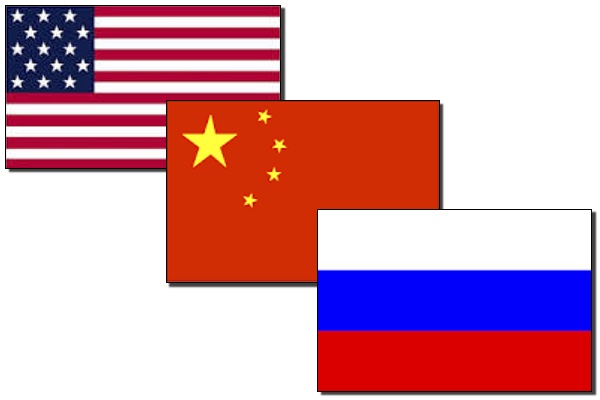 If asked to identify the world’s superpowers today, most people would name the United States, Russia, and China. Although many citizens of these countries maintain that this status is based on the superiority of their national way of life, the reality is that it rests upon their nations’ enormous capacity for violence.

Certainly none has a peaceful past. The United States, Russia, and China have a long history of expansion at the expense of neighboring countries and territories, often through military conquest. Those nations on their borders today, including some that have wrenched themselves free from their imperial control, continue to fear and distrust them. Just ask Latin Americans, East Europeans, or Asians what they think of their powerful neighbors.

Nor has there been any significant reduction of their military might in recent years. Despite their professions of peaceful intentions, all three nations maintain vast armed forces and a clear willingness to use them when it suits their rulers. According to the International Institute of Strategic Studies, in 2014 the United States had 2.3 million active duty military, reserve military, and paramilitary personnel, Russia had 3.4 million, and China 3.5 million. These figures do not include many other people they kept fully armed, such as China’s 3 million-strong People’s Liberation Army militia. In 2015, the combined military expenditures of the three superpowers constituted more than half the world total, with 36 percent ($596 billion) spent by the United States, 13 percent ($215 billion) by China, and 4 percent ($64 billion) by Russia.

Lest anyone think that Russia’s low military expenditures―at least compared to those of the United States and China―indicate a collapse of its capacity for mass violence, it should be kept in mind that Russia continues to possess more nuclear weapons than any other nation. With an estimated 7,290 nuclear weapons in its arsenals, Russia is a formidable military power, indeed. The United States, a close runner-up, has some 7,000, giving these two superpowers possession of roughly 93 percent of the world’s nuclear weapons―more than enough to annihilate life on earth. China, by contrast, lags far behind as a nuclear power, with a mere 260. Even so, these Chinese weapons, if carefully directed, could kill about 52 million people.

As might be expected of countries that view themselves as the light of the world, each is dissatisfied with the nuclear status quo and is busy ramping up its nuclear arsenal at enormous cost. In the United States, a program is underway to spend $1 trillion over the next 30 years to build new nuclear weapons factories, new nuclear warheads, and upgraded delivery systems for the warheads via land-based missiles, submarines, and planes. Meanwhile, both Russia and China are building their own new generations of nuclear weapons. According to a recent New York Times report, Russia is developing “big missiles topped by miniaturized warheads,” while “the Russian Navy is developing an undersea drone meant to loft a cloud of radioactive contamination from an underwater explosion that would make target cities uninhabitable.” For its part, the Chinese military is flight testing a “hypersonic glide vehicle” that is fired into space “on a traditional long-range missile but then maneuvers through the atmosphere, twisting and careening at more than a mile a second,” thus rendering missile defenses “all but useless.” Americans can take heart, though, for the Obama administration “is flight-testing its own hypersonic weapon.”

Nuclear weapons, of course, have not been used since 1945. But there is nothing to prevent their employment in the future, particularly as the superpowers continue to use their military power recklessly. China, though not currently at war, is alarming its neighbors by building islands in disputed offshore waters and establishing military facilities on them. Russia is absorbing the Ukrainian territory it recently seized by military force and heavily bombing portions of Syria. And the United States is continuing its lengthy wars in Afghanistan and Iraq, while launching covert military operations in numerous other countries from its 662 military bases around the globe.

Not surprisingly, these are also violent societies at home. Although most nations of the world have abolished capital punishment, both the United States and China still put large numbers of people to death. Indeed, China is the world’s most active executioner.

This state-organized violence is often accompanied by citizen violence. In 2015, the use of firearms in the United States resulted in the deaths of 13,286 people and the wounding of another 26,819. These figures include 372 mass shootings, but not suicides, of which there are many. In 2012―the latest year with comparative statistics―the number of gun murders per capita in the United States was nearly 30 times that in Britain.

Overall, then, the three superpowers are unusually violent powers. An extensive study by the Institute for Economics & Peace, released recently, ranked 163 independent nations and territories according to their level of peacefulness. Examining 23 qualitative and quantitative indicators linked to domestic or international conflict, the degree of militarization, and the level of safety and security in society, the study concluded that, when it came to peacefulness, the United States ranked #103, China #120, and Russia #151.

Is this really the best that these large, economically productive, educationally advanced, and technologically sophisticated nations can do? If so, the world is in big trouble.