How Are History PhD Programs Responding to the Job Crisis?

●  Story in Inside Higher Ed

●  Growth in  faculty jobs in the humanities falling off

Portions of the following were presented at Crossroads: The Future of Graduate History Education (Drew University, March 12, 2016)

Evidence of a difficult academic job market in history continues to mount, with a widening gap between jobs and PhDs and dwindling numbers of history majors, so how are doctoral programs responding to the situation?

To test how programs are serving the diverse employment markets, I sent out a brief survey to all 154 PhD-granting history departments—replicating three questions from a 2001 survey distributed by the AHA’s Committee on Graduate Education—and heard back from 88. The results show only slight changes in the intervening years.

Asked how they characterize their degree, in 2016 as in 2001, most PhD program chairs characterized them as research degrees, though a slight plurality (45%) in 2016 considered them a “research-based teaching degree” (fig. 1). Just 12 percent of the departments described their PhDs as more of a “general purpose degree.”

Figure 1: Department Characterization of Their Doctoral Degrees, 2001 and 2016 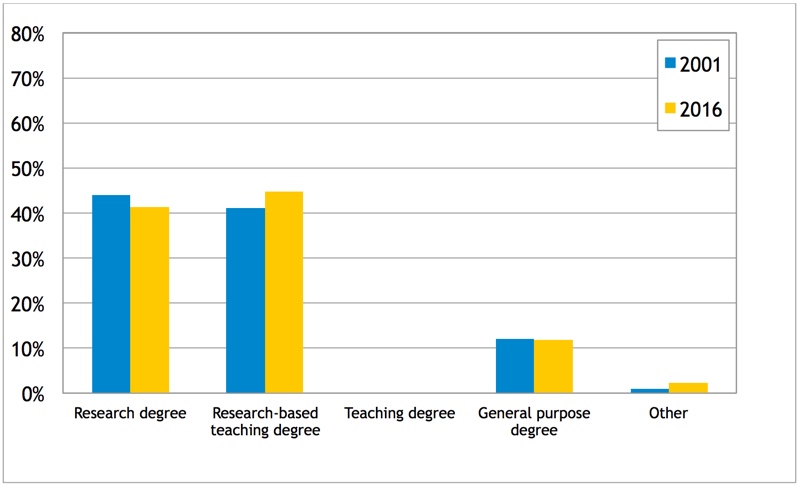 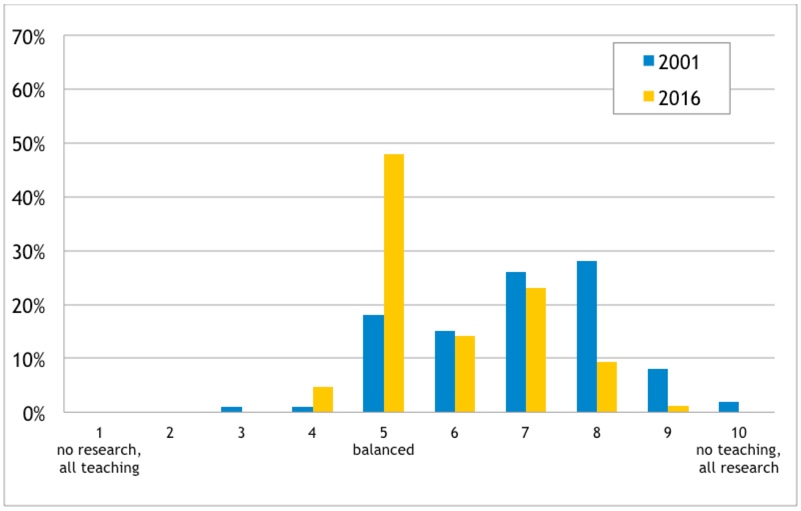 On this question, there was also a significant difference between department types in 2016. The responses from the elite programs tilted heavily toward research, while the responses from the other institutions tended toward a balance between the two types of preparation. Less than a third of the top-rated programs (as assessed by the National Research Council in 2011), indicated that their training was balanced, as compared to well over half of the other programs. The elite private programs were the most heavily tilted toward research.

Figure 3: Share of Doctoral Programs Reporting Their Graduates Well-prepared for Employer Type, 2001 and 2016 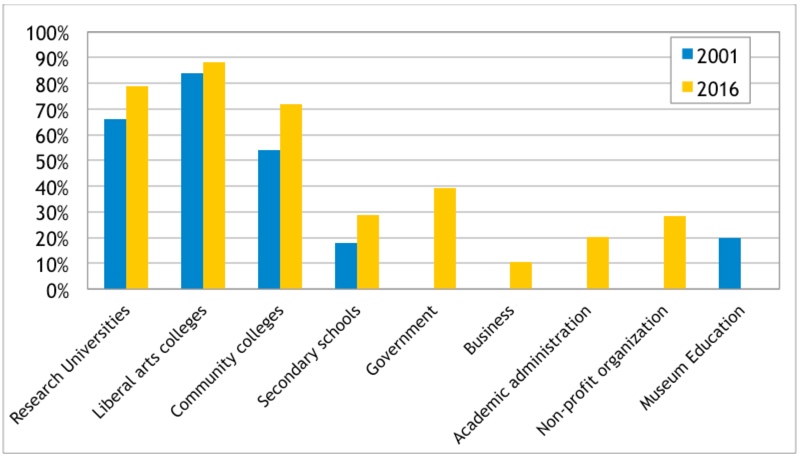 The 2001 survey only included one occupation outside of academia (“museum education”), and just 20% indicated their students were prepared for employment there. An expanded list of job sectors in 2016 turned up only limited evidence that interest in job preparation has extended beyond the academy. A larger share of departments indicated their graduates were well-prepared for government employment (39%) than K-12 education. However, this was the only category outside of academia to be so designated.

I suspect the answer to this question is the most telling about the uphill climb for reformers encouraging departments to prepare their students for a wide array of careers—both inside and beyond the professoriate. Despite three years of efforts from the AHA, challenging departments to prepare history PhDs for a diverse array of careers, most departments still largely consider the PhD as preparation for the academic job market.

When I broke the responses out by university types, there was somewhat more diversity in the perceived employment preparation for their doctorates (fig. 4). Not surprisingly, respondents from the elite universities felt their students were fully prepared for employment in other research universities, but the responses differed widely about other types of institutions. 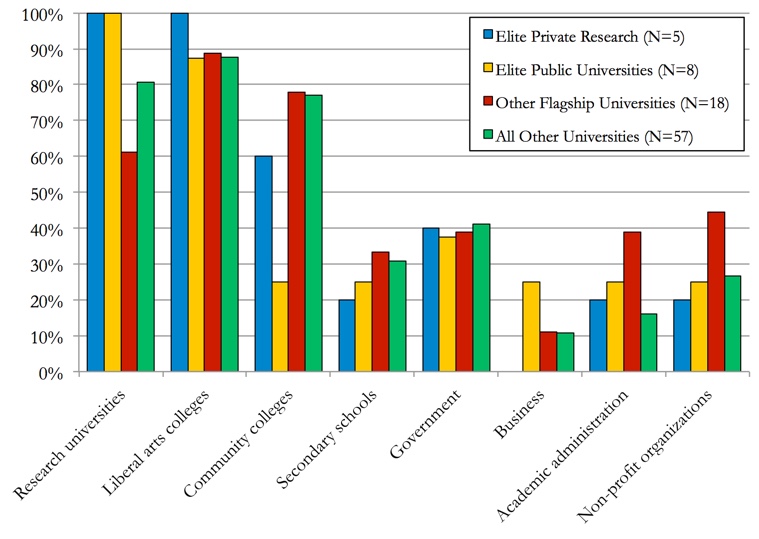 Beyond the professoriate, however, less than half of the programs at all tiers saw their students as prepared for employment in other sectors. Business careers are viewed as particularly distant from the PhD in all programs—particularly at the elite private universities—followed by academic administration.

Notably, the public flagship universities seem to be (or at least to believe) they are preparing their doctoral graduates for the widest array of possible employment areas.

The survey instrument did not probe more deeply into how they are preparing their students for particular careers—though in side messages, a number of chairs indicated that they have developed such programs—but it does highlight a diversity of views about the purpose of history PhD and potential career outcomes for their students.