Dr. Karlos K. Hill, Associate Professor of History at Texas Tech University, is the author of the forthcoming book Beyond the Rope: The Impact of Lynching of Black Culture and Memory (Cambridge University Press, 2016). 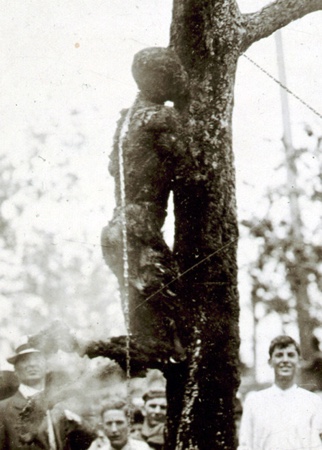 Jesse Washington, a teenage African-American farmhand, hanging from a tree after being severely burned and lynched in Waco, Texas in 1916

The tragic shooting deaths of 17-year old Trayvon Martin in 2012 and 18-year old Michael Brown in 2014 reawakened the nation to the epidemic of killings of unarmed blacks by private citizens and law enforcement officers. Sadly, the shooting of unarmed blacks seemingly continues unabated despite the numerous nation wide street protests, town hall meetings, and pledges from politicians and law enforcement agencies to address this systemic problem. According to the Washington Post, “Although black men make up only 6 percent of the U.S. population, they account for 40 percent of the unarmed men shot to death by police in 2015. What is more, the Post’s analysis documents that black men were seven times more likely than white men to die by police gunfire while unarmed. Whereas in 2012, Trayvon Martin was literally the poster child for unjustified killings of unarmed blacks, today there are a litany of black victims (Eric Garner, Walter Scott, Tamir Rice to name a few) that can fill that role.

Given the frequency and oftentimes callousness of these killings, black activists as well as black people have begun to refer to them as modern day lynchings. Framing police killings of unarmed blacks as lynchings is decidedly an attempt to draw attention to a phenomenon that might otherwise be overlooked in our soundbite/hashtag driven news cycle. Yet, more fundamentally, labeling police killings of unarmed blacks as lynchings is an effort to imbue them with significance as well as historicize contemporary violence against black Americans. With that being said, some Americans bristle at police being associated with racist lynchers and still some assert that it is disrespectful to the memories of lynch victims to equate what they suffered with contemporary police killings. So the question becomes, are these commentators right? More broadly, what are the implications of embracing or rejecting police killings of unarmed blacks as lynchings? And why does this discussion matter?

On a conceptual level, to be lynched means to be denied due process of law. For instance, black lynch victims were often times lynched before they were officially charged with a crime or received a trial.

In contrast, police shootings of black men are not acts of collective violence and are not meant to be witnessed by the community although they sometimes are. Whereas lynchings were decidedly illegal acts, police shootings of black men occur within the context of authorized force. In other words, the law has granted police officers broad discretionary power when it comes to discharging their weapons in the interest of public safety or the safety of the officer. And so police shootings of unarmed black men, unlike lynchings, occur within the established bounds of the law. And so on the face of it, late nineteenth century and early twentieth century lynchings of blacks and police killings of unarmed black men bear no resemblance to each other.

Yet, to entirely dismiss lynching as a useful way of framing contemporary police shootings of unarmed blacks is to miss the deep resonances between these two phenomenon and more importantly to ignore the emotive context (fear and frustration) that is driving black Americans to label police killings as lynchings.

Police Killings/Lynchings as Spectacles of Violence

Some black activists and commentators assert that similar to turn of the century lynchings, police killings are spectacles of violence. This association is not unwarranted. For instance, whereas historical lynchings were incidents in which white spectators witnessed white lynchers mutilate black lynch victims’ eyes, ears, noses, fingers, and genitals, contemporary police killing of black men captured on mobile phones and disseminated on online video platforms allow millions to witness 17-year old Laquan McDonald being shot sixteen times, half of which were fired after McDonald has fallen helpless to ground or Eric Garner who had long ceased to resist arrest, being slowly strangled to death as he desperately pleads to officers, “I can’t breathe, I can’t breathe, I can’t breathe.” For black activists and commentators who link these seemingly incongruous spectacles of violence, the common denominator or better yet the painful symmetry between them is how black people historically and contemporarily have been subjected to unnecessary and excessive brutality at the hands of white executioners.

If we move beyond the acts of spectacle violence perpetuated against blacks and focus on the effects of that violence on black people, the connection between historical lynchings and police killings of blacks becomes more apparent. For instance, historical lynchings were meant to terrorize black people into accepting disenfranchisement, segregation, and other racial indignities of the Jim Crow era. In order to maximize the terror of lynching, white lynchers often left lynched black bodies suspended in town squares or other prominent places for hours, even days so that black people were sure to witness the spectacle. And this strategy was effective.

Famed African American novelist Richard Wright summed up the terror of lynching and the impact it had upon black psychology when he observed that “the things that influenced my conduct as a Negro did not have to happen to me directly; I needed but hear them to feel their full effects in the deepest layers of my consciousness.”

Similarly, police killings of unarmed blacks witnessed via Youtube have an analogous effect on black Americans today. When police shoot to death unarmed black men, it reinforces the perception that black bodies are not safe and that black bodies are without sanctuary. As New York Times columnist Roxanne Gay eloquently states, “Black children are not allowed to be children. They are not allowed to be safe, not at home, not at pool parties, not driving, or sitting in cars listening to music, not walking down the street, not in school. For black children, for black people, to exist is to be endangered. Our bodies receive no sanctity or safe harbor. We can never forget this truth. We are never allowed to forget this truth.”

To be sure, police killings of unarmed blacks are not terroristic in their intent, rather they are terroristic in their effect. The terror that police killings have wrought on black life can be illustrated by how black mothers and black fathers have “the talk” with black children. In the talk, black parents lay out the unspoken rules that should govern their children’s interactions with white authorities and namely the police. Black parents’ press upon their coming of age sons and daughters that when they are in the presence of white police do not make an sudden movements, don’t reach for your waist band, keep your hands visible, do not talk back, comply, comply, comply. The talk and the unspoken rules that undergird it are made necessary by the facts of black life. It has been made even more urgent by the police killing of 12-year Tamir Rice who was shot and killed by a police officer for wielding a toy gun.

Nonetheless, the hope is that following these aforementioned unspoken rules will avert the possibility of a hostile even deadly encounter with police. In other words, black parents having the talk is about the accumulated fear that the numerous instances of police killings of non-threatening and unarmed blacks has wrought on black people.

Lastly, during the late nineteenth and early twentieth centuries, white lynchers were rarely if ever charged or convicted for their participation in lynching. Even when there was photographic evidence (as there often was) of well-known whites involved in lynchings, local law enforcement commonly refused to investigate and local prosecutors typically failed to bring indictments. In connection with this point, it is important to note that while lynchings were motivated by racial hostility, they proliferated due to a culture of impunity that insulated citizen vigilantes from being brought to justice.

Similar to the lynching era, black activists, particular those connected to the Black Lives Matter Movement, assert that police officers who shoot and kill unarmed blacks are seldom charged or reprimanded. Criminologist Phillip Stinson has explained that “To charge an officer in a fatal shooting, it takes something so egregious, so over the top that it cannot be explained in any rational way.” According to a Washington Post report, “even in the most extreme instances, the majority of the officers whose cases have been resolved have not been convicted. And when they are convicted or plead guilty, they’ve tended to get little time behind bars, on average four years and sometimes only weeks. Jurors are very reluctant to punish police officers, tending to view them as guardians of public order.”

Black activists contend that better officer training is not enough to solve the problem of police brutality. True change won’t arrive until police officers who clearly violate established protocols are held accountable for using deadly force against non-threatening and unarmed blacks. By refusing to hold rogue cops accountable, black activists suggest that law enforcement agencies are creating a culture of impunity akin to the one that existed during the lynching era.

Rather than bring rogue officers to justice, law enforcement agencies along with city governments have settled upon paying millions of dollars to families of police shooting victims. According to the Wall Street Journal, the 10 cities with the largest police departments paid nearly a quarter of a billion dollars in settlements and court judgments in 2014, up almost 50 percent since 2010. Those same cities paid out over $1 billion over that five-year period in cases that involved alleged shootings, beatings and wrongful imprisonment.”

If a victim’s family accepts the payout, they are often required not to talk about the case publicly and forfeit their ability to bring suit against the city at some future date. What these statistics should make clear is that as a society we have by and large substituted family payouts for pursuing justice.

While payouts to families of police shooting victims has certainly reached an all-time high, it is not a new phenomenon. During the lynching era, some families of black lynch victims pursued restitution for the wrongful death of a loved one. While their claims were largely ignored by Southern authorities, in some cases families of lynch victims received reparations payments. While a wrongful death settlement was perhaps the only means by which black families could gain a measure of justice during the lynching era, certainly in the 21st century black families ought to be able to gain more than what amounts to token justice. To the extent that we continue to substitute payouts for real justice, one might argue that the cultural and political logics of the lynching era remain with us.

Admittedly the lynching era and the era of police killings of unarmed black men are not the same, but for some, the deep resonances that exist between these eras suggest that they are more alike than they are different.