Should We Really Turn College Education over to the Free Market?

Paul J. Croce is Professor of History and Chair of American Studies at Stetson University, where he teaches topics dealing with values debates, topics that your grandparents tell you not to bring up at the dinner table. He is the recent past president of the William James Society; he has written Science and Religion in the Era of William James (University of North Carolina Press, 1995) and Young William James Thinking (forthcoming), and he writes for the blog PubClassroom.com.

In an era when the number of words on Twitter in only two years will exceed the number of words ever published, academic scholars should pay heed to changes in writing and teaching swiftly taking place outside their offices and classrooms. There are powerful forces calling for briefer expositions and for teaching to appeal to a market that expects and demands such brevity. While paying attention to those calls, academics should remember that beyond appealing to their audiences, their deeper purpose is to inspire and provoke. 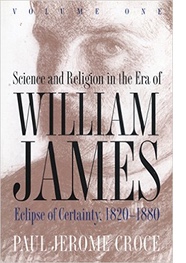 Christian Rudder in Dataclysm (2014) suggests that the shift from longer statements to tweets involves only the challenge of concision. And Steven Gillon in the Huffington Post calls for teaching that appeals directly to the marketplace of student interest. They have each done marvelous work: Rudder is a mathematician and founder of the dating website OKCupid, who has turned his social media entrepreneurship into astute social commentary on private identities beneath public personas. Gillon is a professor at the University of Oklahoma, best-selling author, and a host on the History channel rightly well-known for his on-camera charm and wonderful stories about modern American history.

Rudder’s delight in simplification, with his mathematical goal of reducing human behavior to a set of numbers, is a good first step toward social scientific analysis, but the methods he celebrates point to the constriction of another form of analysis using words, whose goal is not to simplify but to explain. He is part of a contemporary tide toward brevity that can appeal to the dreams of countless students tired of reading for class or writing those research papers: This is sanctification of less-taxing thought as if verbal analysis just needs a big data dump with explanation evasion—be gone excess verbiage!

Some brevity can be a tonic for obscure discourse, but brevity itself can be excessive, as was the Emperor in the movie Amadeus. After listening to Wolfgang Mozart’s music, he searches for ways to dismiss it, and finally rattles off, there are “too many notes.” The heart and soul of academic discourse is not its fancy language or its dialogues based on the a discipline’s literature, but the ability to explain aspects of our world, from anthropology to zoology. Academic inquiry goes beyond colleting facts, but pursues questions: How did that happen—Why—What are its implications? Disciplines are tools for understanding meanings. Explanations help steer us through problems by clarifying contexts and opening up possibilities.

OK, ChristianRudder, it is true that some brevity can still explain, and this combination of the brief and the explanatory is an art to foster. But brevity without explanation can become just a handy shortcut with a mere fig leaf of learning—and this form of education can serve as a swift route for students to be displaced by machines, which can do a lot better job as collections of information. The contemporary urge for brevity can throw out the valuable purposes of academic inquiry with the bathwater Rudder is so keen to dismiss.

Steven Gillon has produced some artful examples of brevity with explanation, for example, in his responses to the Ask Steve segments on the History channel; and he has produced longer explanations embedded, for example, in the stories of Boomer Nation (Free Press, 2004) and The Pact (Oxford, 2008), tales of everyday Americans from Philadelphia growing up in the 1950s and 1960s, and a dual biography of near twins Bill Clinton and Newt Gingrich that provide substantial understanding of modern American culture. In his Huff Post article he calls for a dramatic shift in college teaching based on extending still further the arts he has mastered in his books and on the air. His explanations have been popular, and now he envisions colleges multiplying the popularity with little attention to the explanations.

Education, he insists, should “follow consumer habits.” In particular, “colleges should be required to compete for students every semester, and for every class.” He points to real problems that his marketplace proposal would address: The high and rising costs of college education are happening at the very time when we need a more educated workforce. His marketplace version of democracy could help address these very real problems, but with some serious side effects. He declares, in tune with the conventional wisdom, that “education cannot hold off the forces of technological and economic change.” If this is indeed the wave of the future, educators need to examine the educational goods before handing them off to the marketing department.

Gillon suggests comparing the acquisition of a college education to the purchase of shoes. On this, he earns partial credit: they each involve free choice. So Gillon asks, “why not provide students with a similar menu of choices in education?” The answer is that with shoes, the customer is always right, but it’s not so in education. Educational institutions modeled on the selling of its goods to the largest market will tend toward becoming what were called in the nineteenth century proprietary schools, so eager to please their students that their standards slipped.

There is no doubt that such an education would be more fun than a lot of current college courses, but it would likely veer away from the teaching of substantial explanations, especially ones that challenge the status quo. As with Rudder’s call for brevity, a market-based education can prevent challenging explanations from surfacing. In the jangle of competition, students will follow their appetites, gravitating toward learning what they already know, with conventional interpretations enriched with more stories but with little motivation to question their interests or appetites.

If education is only for career preparation, this proposal for popular appeal would be a sufficient response to our current dilemmas. But education is more than a good-fitting pair of shoes; it can be a walk with towering and challenging ideas that can awaken to a mental map for understanding the world around us. Education can rouse us to support the world’s goodness and beauty, and also to tackle its problems, including those generated by the power of entrenched officeholders and the appeal of marketplace conventions.

Rudder’s tweets and Gillon’s markets provide good lessons in concision and accessibility for improving college teaching. But before we leap into these brave new worlds, academics had better hold tight to their identifying purposes as educators and as inspirers to new imaginative possibilities. If Rudder and Gillon can bring those robust purposes to the new digital worlds of communication and education, I’m sold.