by B. C. Knowlton 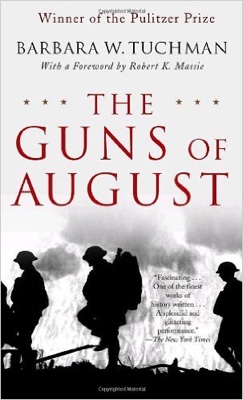 A few years ago I was asked to teach a short but intensive summer course to a group of incoming first-year college students, who had come a few weeks early to get a leg up on college-level work. They had been identified by Admissions as likely to need some extra help in developing their literate abilities and industrious habits. I was to teach a History course that could fulfill a core requirement. My field is Modern European History, but the topic of the course could be almost anything.

As I began to ponder the possibilities, it occurred to me that the world would soon observe the one-hundredth anniversary of the outbreak of the First World War. There would no doubt be a great deal of coverage and commemoration of that event, and it was satisfying to imagine my students knowing the facts and understanding the discussions about the pre-war world, the assassination of the Archduke, and the experience and significance of the trenches.

I knew that most of the commemoration would play out in other media, but thought that having read whatever book I would assign (we could really only read one), my students would see the difference between what can be taken on in critical literacy and what can be taken in on the History channel. There would be plenty of new books published as well, and maybe my students might then read one or more of them.

As I considered what we might read, I recalled that about fifty years earlier, there was published what has probably been, for the post-Second World War world, the most influential and compelling account of the diplomatic crises and military battles that took place in the late summer of 1914. It would cover the topic very well, and would give us a chance to consider, in anticipation of the next big anniversary, how the history of the war was told on the occasion of the last big anniversary. That sort of reading is just the sort of thing reading can do.

When it came out, Barbara Tuchman’s The Guns of August was a best seller and a Book-of-the-Month Club selection. It won a Pulitzer Prize, and has been in print ever since. There has, to be sure, been controversy for as long about its historical merits; but I decided that for my pedagogical purposes, I would at least at the outset take the view that the only thing that has been said against it is that it is popular rather than academic history. By now, I thought, that should rather argue for than against reading it.

I was even able to point out to my students that when the book was first published, President John F. Kennedy had read it; and that his reading of it influenced his handling of the Cuban Missile Crisis. Robert F. Kennedy reported that in the midst of the crisis his brother “talked about the miscalculations of the Germans, the Russians, the Austrians, the French, and the British. They somehow seemed to tumble into war, he said, through stupidity, individual idiosyncrasies, misunderstandings, and personal complexes of inferiority and grandeur.” President Kennedy determined to avoid taking the same sort of tumble, and fifty years later we are still here to read about that, too, if the moment had not passed in which the book was still readable and in which reading it would mean something.

Another reason why I thought The Guns of August would be suitable for my incoming college freshmen was that I had used the book a few years previously in a course for high school sophomores. I was then teaching at a small but not very selective private school. There The Guns supplemented a standard textbook in Modern World History, but lent itself to the sort of text-bookish reading that high school students often deplore but then demand. It is, after all, easier to memorize historical facts than to think historical thoughts.

In reading The Guns of August, my high school sophomores plotted the chronology of events; they identified the English King, the German Kaiser, the Russian Czar, and the rest of the cast of characters; they distinguished the Triple Alliance from the Triple Entente; they analyzed Germany’s Schlieffen Plan and criticized France’s élan; they colored maps and captioned photographs. They were quizzed and tested. In all this, the mere readability of the book was never an issue.

So now, ten years later (as I recall it more precisely), my college freshmen took up The Guns of August. I assumed that these students, with my help, would be able to do the high school reading of the book, and then do something with it to take it to the college level. That was, after all, precisely what we were there to do.

We might consider the constitutional roles of the European rulers; the diplomatic history and theory involved in the making and maintaining of an alliance or entente; the question of whether the German plan that went into effect was still Schlieffen’s; and whether France could have been better prepared and deployed to meet it. We might look at Belgian neutrality from all sides, and focus on both what led to and what followed from its violation. We might look for Alsace and Lorraine on 17th, 18th, and 19th century maps. And we might see the naval sideshow Tuchman herself saw as she sailed through the Mediterranean, in all its portentous significance.

But my students had barely begun to read the book, when they began to complain that it was too hard to read. They couldn’t say what about it was not readable; but that seemed to them to prove their point. I met with the Dean of General Education, who had approved of my choice of this text, and we agreed that we could not, at least not yet, admit that this long-popular history was now unreadable by college freshmen.

That first chapter, for example, which described the funeral of Edward VI, was intended by Tuchman to represent a world that had passed away. The fantastical, funereal strangeness of the account is not an obstacle to comprehension, but rather the point to be comprehended. And then, in the midst of the funeral procession, we recognize a familiar device – a “flashback” to Edward’s European diplomacy, which will help to explain the passing away of the pre-war world. When Tuchman returns to the funeral, having already described the kings who had kept the peace, she then describes the generals who would fight the war.

The second chapter, which introduces readers to the Schlieffen Plan, also begins to anticipate its failure. Just in case they didn’t know, I told my students that the war started but did not end in August of 1914; and that when it did end the Germans lost. The little reading students do these days tends to be fiction; this is why they tend to call all books “novels.” One reads a novel not knowing how it ends, and only to find out. A good narrative history can read like a novel; but what can it mean to read a story when we know how it ends? There must be some other reason for reading it. This is how I tried to teach these students to read; and I would say that it worked rather than that it didn’t.

When that year’s fall semester started, I taught a version of the Great War course as a writing-intensive first-year seminar. Where the summer course was for the low end of the incoming class, this was for the high end. Admissions had determined that these kids could hit the ground running. Here The Guns of August was supplementing a slim volume of primary source documents (we would work on these on Mondays) and a more current, slightly more analytical than narrative history of the outbreak of the war, with short chapters that made it convenient for us to see how, as a secondary source, it made use of the sorts of primary sources we had seen (this book we worked through during our Wednesday class meetings). In this way we could also take up the historiographical controversy about Tuchman’s history.

After such a deliberately disciplined approach to the outbreak of the Great War, I thought that on Fridays we could be a little more informal. We could read The Guns more for fun, and discuss it not so much as a secondary source making use of primary sources but as the sort of engaging narrative readers have always found it. I called these classes “Book Club Fridays,” and the students liked the idea of it.

But, though no one said that this eminently book-clubbable bookwas too hard to read (the historical background, the cast of characters, and the sequence of events, of course, were familiar to them from the other readings), most had very little to say about the reading they had done of it. They did their work with the other texts, and wrote decent papers (they were, after all, good students); but when given a book to read just for discussion, they didn’t really know what to do with that. It was not something they were used to doing, and it didn’t seem to be anything they really wanted or needed to do. What they liked about the more informal approach was that it was a break from the “real” work of the course.

I knew what I had to do with the students who found the book difficult to read, but I found it difficult to deal with the reading of it by these better students. Some of them suggested that The Guns of August was outdated; it was, after all, fifty years old. They were not, however, thinking of the more recent scholarship – they certainly had not read that. It was rather that Tuchman’s kind of writing was not the kind of thing anyone read anymore. And yet as recently as ten years ago her history was still readable, and by readers younger than these. Fifty or a hundred years seems long enough for the world to have changed; how much can happen in ten?

Students who come to college unable to read very well can be taught to read better; can students who can already read be encouraged to really become readers? More particularly, can those who take required History courses as college freshmen become and remain literate and critical students of History? Once there are no more papers to write, will they see any reason to read? How, as they head into the future, will they engage with the past? When historic anniversaries approach, will they pay historical attention to them, or just watch the documentaries?

At the end of The Guns of August, the Great War has only just begun; and when college students have only just been “blooded” in the study of its history, or in the history of anything that might be covered in a core course, we still have almost four years in which to work with them in developing their literate and critical abilities. We can’t know how these struggles will turn out, but we must be determined to undertake them.