This Is What’s Needed to Win the Climate-Change Struggle 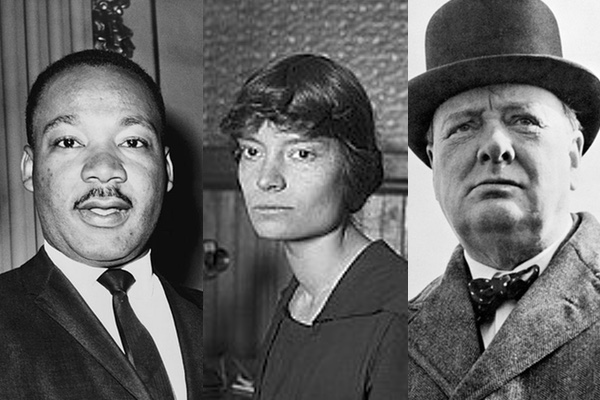 Like Winston Churchill rallying the British as they faced Nazi Germany alone. Like Martin Luther King battling to overcome segregation and racial discrimination. Like Dorothy Day laboring for decades to help the poor. Such heroic struggles we should recall. For after the recent Paris climate summit we need such inspiration to stiffen our spines in order to continue the long, uphill climate-change struggle (hereafter CCS). This essay will mention the most important facets of the Paris conference, the obstacles we still need to overcome, some specific actions we can take, and, finally, how the examples of Churchill, King, and Day can help us win the CCS.

In December almost 200 countries agreed in Paris to limit the growth of carbon dioxide (CO2) and other greenhouse gas emissions. The goal is to prevent the earth from heating up more than 1.5 to 2 degrees Celsius as compared to pre-industrial levels. Almost all countries had already submitted “nationally determined contributions” indicating how they would address the problem. The Paris conference itself produced a two-part document (the Paris Agreement): a 29-article legally binding agreement and a 140-item guide to it that details ways to observe it. The guide states that a “facilitative dialogue among Parties in 2018” should occur and sets out other recommendations for monitoring and reviewing progress toward emissions reductions. (See The Atlantic’s “A Reader's Guide to the Paris Agreement.”)

In The Nation, Michael T. Klare wrote that “2015 can be viewed as the year in which the epochal transition from one set of fuels to another took off, with renewables [solar, wind, etc.] making such significant strides that, for the first time in centuries, the beginning of the end of the Fossil Fuel Era has come into sight.” As he emphasizes, it was primarily the Paris Agreement, the conference that produced it, and “two events on the periphery of the Paris climate summit [that] were especially noteworthy in terms of the renewable revolution: the announcement of an International Solar Alliance by India and France, and the launching of the Breakthrough Energy Coalition by Bill Gates of Microsoft, Jeff Bezos of Amazon, and a host of other billionaires.”

Both the “Alliance” and the “Coalition” will help mobilize a force that has too often been a hindrance to the CCS—our market economies. As columnist Thomas Friedman overstates the case: “To phase out all fossil fuels” by roughly 2050, “there is only one force big enough to do that . . . and that’s Father Greed, a.k.a., the market.” Klare quotes the “Alliance” declaration: “We intend making joint efforts through innovative policies, projects, programs, capacity-building measures, and financial instruments to mobilize more than 1,000 billion US dollars of investments that are needed by 2030 for the massive deployment of affordable solar energy.” Klare also notes the “Coalition” statement: “Scientists, engineers, and entrepreneurs can invent and scale the innovative technologies that will limit the impact of climate change while providing affordable and reliable energy to everyone.”

For markets to be effective, however, renewable use has to be price competitive. The recent drop in world oil prices makes this even harder than previously. Fortunately, however, in the last six years solar and wind prices have come down 80 and 60 per respectively. Besides natural market prices, governments also play a part by their tax and subsidy policies. The United States, for example, has just enacted legislation that extends tax credits for solar and wind investments and development. Numerous countries, but not the United States, have enacted a national “carbon tax,” which taxes the carbon emissions that contribute so heavily to global warming. A recent Nation essay refers to such a tax when it states that “putting a price on carbon” is “the single most powerful climate-policy reform available.”

And Friedman writes, “What will make this deal [the Paris Agreement] epochal is if the U.S. and China now lead the world in imposing a price on carbon, because only that will take to scale the already significant technology breakthroughs that have happened with wind, solar, batteries, energy efficiency and nuclear power.” About this big “if,” more later. But U.S. Secretary of State John Kerry is correct in saying that the Agreement is “sending literally a critical message to the global marketplace” to invest in renewable energy.

Despite the praise heaped upon the Paris Agreement, it has also been criticized by some environmental activists like Bill McKibben (see below). In a New York Times op-ed piece, “Falling Short on Climate in Paris,” he notes the Agreement is unenforceable and that the national pledges to cut greenhouse emissions are insufficient. He also mentions probable Congressional opposition to providing funding for all the modest pledges made at the conference.

Indeed U.S. Republican Congressional opposition and more broadly conservative U.S. denial of human-caused global warming remain major obstacles. A 2014 survey of 20 major countries indicated that such denial was greater in the Unites States than anywhere else. Too many U.S. citizens believe that the scientific community is “split” on the question. A recent survey of U.S. teachers indicated that 40 percent of them who deal with human-caused climate change present it as “controversial.” Much of the climate-change denial is fueled and funded by those with corporate interests in fossil fuels like the Koch brothers. (See here for more on the scientific consensus on global warming, Republican opposition, and the Koch brothers.)

Another major obstacle that Pope Francis stressed in his recent climate encyclical is our “throwaway culture,” one of “compulsive consumerism,” where the “market tends to promote extreme consumerism in an effort to sell its products, [and] people . . . easily get caught up in a whirlwind of needless buying and spending.” Instead, he insists, there is an “urgent need for us to move forward in a bold cultural revolution,” one that would “enable the development of new convictions, attitudes and forms of life.”

Changing our mindset and cultural practices does indeed require “a bold cultural revolution.” Little mentioned in the Paris Agreement, but a major cause of global warming is another deeply ingrained habit that will be difficult to change, and that is present-day meat-producing and meat-eating practices. One person in Paris who did speak to the need for less meat-eating was former California governor Arnold Schwarzenegger.

A final major obstacle mentioned here will lead to the third and fourth parts of this essay, and that is the inertia, weariness, and lack of single-mindedness of many of us who have long recognized the dangers of global warming. In short, we have too often failed to follow the advice of that old song that was adapted for the civil rights movement, “Keep Your Eyes on the Prize.” Amidst all our other cares, personal, social, and media-bombarded, we have too often become distracted, too often thought of global warming as a long-term problem that did not require our immediate attention.

What Can We Do?

We can act now. Personally, socially, politically. We can learn more about how perilous global warming is and will be for us, our children, and grandchildren. We can lessen our greenhouse gases footprint by using more renewable energy and eating less meat. We can try to educate others, especially all the deniers still amongst us. We can join and become active in organizations that battle against global warming, and support politicians and legislation committed to this struggle. As suggested above, we can push for some sort of national tax on carbon emissions and support President Obama’s Clean Power Plan, which Senate majority leader Mitch McConnell hopes to derail.

Although organizations fighting against global warming have been around for decades, perhaps the most influential one today is 350.org, founded eight years ago by Bill McKibben. 350.org’s website offers an excellent summary of its efforts and suggestions for how each of us can become more involved.

How Heroic Examples Can Inspire and Embolden Us

At the beginning of this essay you read that actions of Churchill, King, and Day could inspire us. Later on, that weariness and lack of sticktoitiveness sapped our strength and weakened our resolve to overcome the climate-change challenge. Now we’ll consider how heroic examples can charge up our emotions propelling us to become more active and imaginative.

In her excellent Political Emotions: Why Love Matters for Justice, Martha Nussbaum writes “Emotions directed at the nation and its goals are frequently of great help in getting people to think larger thoughts and recommit themselves to a larger common good.” As I have indicated elsewhere, she also stresses the importance of public oratory and events such as Martin Luther King’s “I Have a Dream” speech to thousands of people spread out before the Lincoln Memorial. She also realizes the importance of songs—one thinks of “We Shall Overcome”—and the examples of heroes like King to inspire us to work for the public good.

Both Churchill and King were moving orators. Shortly after the fall of France to the Nazis in June 1940, Churchill addressed the House of Commons and later repeated his speech on the radio. In it he told the British people: “The Battle of France is over. I expect that the Battle of Britain is about to begin. . . . Upon it depends our own British life. . . . Let us therefore brace ourselves to our duties, and so bear ourselves that, if the British Empire and its Commonwealth last for a thousand years, men will still say, ‘This was their finest hour.’ ”

But Britain stood alone for only about a year before Hitler foolishly unleashed German troops on the Soviet Union. King’s battle to combat segregation and discrimination lasted much longer. And one thing we engaged in the CCS can learn from him is sticktoitiveness, keeping our “eyes on the prize.” In his own day, he was often vilified and arrested 30 times, but he persevered.

So did Dorothy Day, who both President Obama and Pope Francis have singled out as an American hero. She opened her first Hospitality House to help the poor in 1933 and also began regular publication of her monthly paper, the Catholic Worker (CW). Despite setbacks because of her pacifism in World War II, she continued opening up new Hospitality Houses and writing regularly in her paper until shortly before her death in 1980. Never the moving orator that a Churchill or King was, she still wrote some stirring passages in her many CW pieces. (See, for example, her powerful words in a column in 1942, responding to a journalist who asserted that her Catholic Workers were pacifist sentimentalists and afraid of suffering: “But let those who talk of softness, of sentimentality, come to live with us in cold, unheated houses in the slums. Let them come to live with the criminal, the unbalanced, the drunken, the degraded . . . .”)

Only in recent years, thanks in large part to 350.org’s efforts, have climate activists begun to generate the type of large public events that can stir people’s emotions (see, for example, on the Global Climate March in November 2015 and the Paris Concert in December featuring Patti Smith and others). The CCS may not yet have its charismatic heroes like King or signature songs like “We Shall Overcome,” but momentum is building. Like Johnny Cash, we hear that “train a comin’.” And like King in his most famous speech, we sense “the fierce urgency of Now” and do “not wallow in the valley of despair,” but like him dare to dream. We too shall overcome. We must in order to leave our children and grandchildren a sustainable planet.