It’s Been 125 Years Since Wounded Knee. The Lakota Are Still Seeking Justice.

David W. Grua, a historian and documentary editor for the Joseph Smith Papers, is the author of Surviving Wounded Knee: The Lakotas and the Politics of Memory (Oxford University Press, 2016). 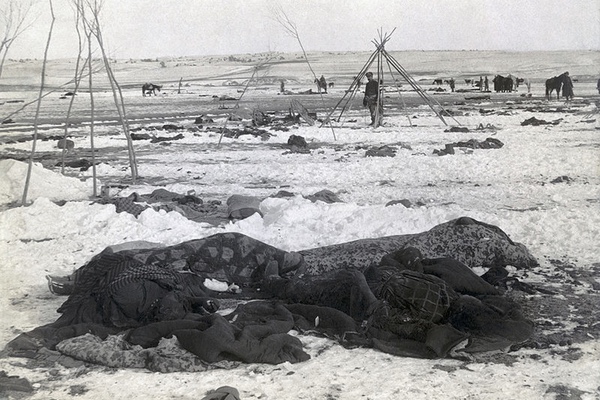 This year marks the 125th anniversary of the massacre at Wounded Knee Creek, South Dakota, where the U.S. Seventh Cavalry killed the Lakota Chief Big Foot and more than two hundred members of his band on December 29, 1890, ostensibly for their adherence to the Ghost Dance religion. Wounded Knee is an internationally-recognized symbol representing past massacres and genocide, as well as indigenous demands for recognition and sovereignty. Dee Brown’s 1970 Bury My Heart at Wounded Knee, for example, was a New York Times bestseller and has been translated into dozens of languages. The American Indian Movement’s (AIM) 1973 occupation of the massacre site ensured that the name Wounded Knee appeared regularly on the nightly news in connection with AIM’s demands for the United States to honor treaties. In 2015, the Healing Hearts at Wounded Knee (HHAWK) initiative has called upon all people throughout the world to remember not only those slain at Wounded Knee, but also the victims of all atrocities, in hopes that such remembrance will lead to the eradication of violence, massacre, and genocide. 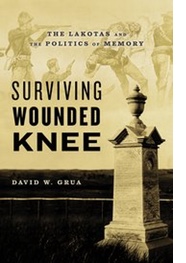 Wounded Knee, however, has not always been remembered primarily as a horrific massacre. In the years after 1890, the U.S. Army made Wounded Knee a central event in American public memory, awarding 20 Medals of Honor to the Seventh Cavalry and erecting a monument to the soldiers killed in the engagement. Wounded Knee was heralded as the final victory in the 400 year “race war” between civilization and savagery, the event that laid the foundation for the American nation’s subsequent prosperity. Since the 1890s, Wounded Knee has undergone a breathtaking transformation in public memory, from a heroic battle to a horrific massacre of historic significance that could be readily invoked by Dee Brown, AIM, and the HHAWK initiative. In Surviving Wounded Knee: The Lakotas and the Politics of Memory I place the Lakota survivors of Wounded Knee at the center of this transformation. The book tells the story of the survivors’ half-century pursuit of justice that culminated in their appearance before the United States Congress in the late 1930s to testify in support of a bill intended to “liquidate the liability of the United States for the massacre of Sioux Indians at Wounded Knee.”

The Lakota survivors—traumatized, impoverished, and confined to reservations—nevertheless found multiple ways to challenge the army’s “official memory” of Wounded Knee. In accordance with traditional Lakota approaches to conflict resolution, the Lakotas sought compensation from the government for their human and property losses, filing several claims in the years following 1890. These claims resulted in a series of government inquiries, in which bureaucrats attempted to reconcile official records with the survivors’ memories. In each investigation, the bureaucrats concluded that because government officials had classified Big Foot and his people as “hostiles” in 1890, due to their association with the Ghost Dance, the Lakotas were ineligible for compensation. Undeterred, the survivors dictated to white interlocutors their accounts of Wounded Knee. In addition, in 1903 the Lakotas erected a monument at the Wounded Knee mass grave “in memory of the Chief Big Foot Massacre,” thereby ensuring that Lakota perspectives would shape future interpretations of the site.

What emerges in these written sources is clear evidence of Lakota engagement in the politics of memory, as the survivors challenged the official explanations for the killings. Wounded Knee was not a heroic battle that ended centuries of race war, but rather a brutal massacre of historic proportions. Big Foot was not a hostile, but a peaceful chief seeking nonviolent solutions to the conflict. Wounded Knee was not the result of a Ghost Dance-inspired insurrection against American sovereignty, but was instead a violation of the 1868 Treaty of Fort Laramie, which guaranteed peaceful relations between the United States and the Lakota nation.

In the late 1930s, South Dakota Representative Francis Case introduced a bill in Congress calling for $1,000 compensation for each Lakota survivor of Wounded Knee or heir of a victim. Two survivors, Dewey Beard and James Pipe on Head, testified in support of the bill before a House Indian Affairs subcommittee in 1938. Beard had lost his wife, infant son, parents, two brothers, and a niece on December 29, 1890; Pipe on Head, who was just ten years old in 1890, had witnessed the soldiers shoot and kill his pneumonia-stricken grandfather, Big Foot, as he laid on the ground. Both men described the traditional Lakota practice of murderers offering compensation to a victim’s family in order to seek reconciliation, arguing that the government should offer compensation for the murders committed at Wounded Knee. This would help restore the peaceful relations that had been established by the 1868 treaty and would permit the survivors, as Beard testified, to “forget the whole Wounded Knee affair.” In 1940, as the 50th anniversary of Wounded Knee approached, the House Indian Affairs Committee voted to approve the Wounded Knee compensation bill. However, with attention increasingly focused on the international scene, the bill was unable to receive a full hearing on the floor.

As Surviving Wounded Knee argues, the Lakotas’ pursuit of justice nevertheless laid a foundation for activists who subsequently drew upon Wounded Knee’s symbolic power to promote indigenous sovereignty and objectives. For example, Dee Brown relied almost entirely on the survivors’ accounts of the massacre in his Wounded Knee chapter. AIM’s 1973 occupation of Wounded Knee included the mass grave, which is still primarily interpreted by the survivors’ 1903 monument. The survivors’ descendants—many of whom are involved with the HHAWK initiative—have sustained a strong collective memory, orally preserving their ancestors’ stories and passing them on to the next generation. As Surviving Wounded Knee demonstrates, the survivors and their prolonged engagement in the politics of memory remain central to the symbolic power of Wounded Knee.