John Dickson, a retired diplomat, served at the U.S. Embassy in Ottawa from 2004-2007 and writes on history and current events in historyallaround.org. 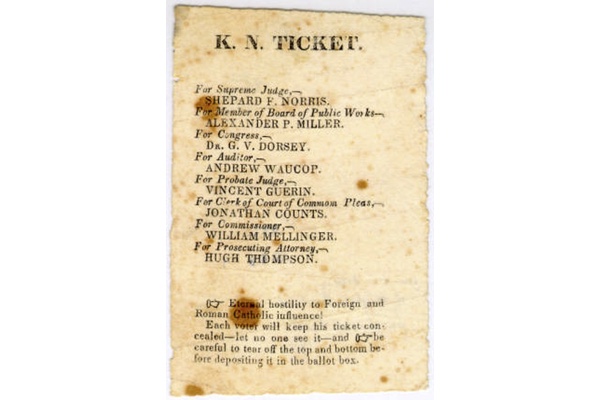 Just as professional sports teams don throwback uniforms to capture fans’ attention and perhaps their dollars in novelty merchandise, the current crop of Republican Presidential candidates seems to be engaging their own source of throwback. They look to be drawing for their playbooks a page all the way back to the 1850s and the Know Nothings. That anti-party political order bequeathed the nation one of the most colorful but also confounding names, opening up the obvious line of inquiry - who would want to be associated with a movement that embraces ignorance in its title?

The Know Nothing name emerged not from a desire to be equated with stupidity, but from the secretive nature of its early days when adherents were instructed to answer questions about the order by saying they “know nothing.” Following their success in several state political elections in 1854, they gave themselves the respectable official title, the American Party, but the Know Nothing name given to them by outsiders had already stuck.

The 2015 Republican playbook does look as if it is drawing on several themes and tactics from the 19th century movement, most notably anti-immigration and the rejection of traditional politics. The third pillar of the Know Nothings, anti-Catholicism, could easily be updated using the “replace all” function on a computer, substituting in the word Muslim for the earlier threat to Protestant values.

One Know Nothing member, Henry Wilson, who was elected as a U.S. senator from Massachusetts, relayed the 1850s playbook, describing the secret order whose “professed purpose was to check foreign influence, purify the ballot box and rebuke the effort to exclude the Bible from the public schools.” The societies that fed into the political movement bore their anti-immigrant leanings in their names: Sons of America, the American Protestant Association, the Order of the Star Spangled Banner, and the Order of United Americans. Members took oaths, according to a national convention in November 1854, to “not vote for any man for any office … unless he be an American-born citizen.” If elected or appointed to any office, the member would “remove all foreigners, aliens of Roman Catholics from office or place.”

The nativism of the Know Nothings crept over into an overarching contempt for politicians, in reaction to a perceived increase of immigrants and Catholics in politics. The movement then saw its greatest growth spurt in a period of generalized dissatisfaction with the inability of both parties to deal with the major issues of the time. Failure of the Whigs in the presidential elections of 1854 and the only temporary resolution of the slavery issue in 1850 left a vacuum in the two-party system, leading quickly to the disappearance of the Whig party . New issues such as temperance and the length of the working day emerged but were left untended.

Tactically, the Know Nothings focused their attention at the state and municipal levels of electoral politics drawing on their secret organizations to mobilize voters to head to the polls and reject traditional politicians. They were most successful in Massachusetts, when voters in 1854 swept into office Henry J. Gardiner as governor and nearly all 400 races for the senate and house of representatives. Races from Maine to Louisiana and California saw gains from Know Nothing candidates, moving Charles Francis Adams of Massachusetts to state: “There has been no revolution so complete since the organization of government.” Adherents replaced professional politicians, most evidenced in Massachusetts by the influx of clergymen replacing lawyers in elected positions.

The parallels to 2015 resound: anti-immigration in the rhetoric of “build a wall”; anti-political parties in the rhetoric of “I am not Washington’s candidate”; secret political organizations in the fund-raising behind super-PACs; the tactics of state and local mobilizing paying off in gerrymandered and now permanently safe electoral districts in the House of Representatives; the “purity of the ballot box” in the attempted legislated election restrictions making it harder for minorities to cast a ballot.

One aspect of the current version, though, does not track with its earlier model. While the 1850s movement did not embrace a lack of knowledge, the 2015 version can lay claim to the connotations of ignorance in Know-ing Nothing; even a GOP presidential candidate, John Kasich, the governor of Ohio, declared that Ben Carson’s tax policies are a fantasy. Kasich seemed to be mimicking another one-time candidate, Louisiana Governor Bobby Jindahl, who in 2013 urged Republicans to “stop being the stupid party. It's time for a new Republican Party that talks like adults." Instead of answering they “know nothing” when asked a tough question, the candidates resort to an attack on the questioner, for their audacity, unfairness or meanness. Knowing nothing or very little can extend to other statements: listing five cabinet departments for elimination that included naming the same department twice; the unwillingness to walk back the claim that thousands of people from New Jersey cheered the collapse of the World Trade Towers on September 11; insisting that Obamacare is the worst thing to happen in this country since slavery.

It may have been a non-politician and non-historian who best captured the flaws in the Know Nothing appeal, then and now, although he was writing in 1851 about two men who signed on to hunt whales. “Ignorance is the parent of fear,” wrote Herman Melville, describing how Ishmael’s ignorance led him to fear Queequeg, the tattoed, heathen Polynesian harpooner who was peddling shrunken heads. “The man's a human being just as I am:” continues Ishmael, “he has just as much reason to fear me, as I have to be afraid of him.”

By spouting ignorance, this crop of politicians is delivering fear in its throwback version.