This is part three of a three-part series. (Click here for part 1 and here for part 2.)  Mr. Striner, a professor of history at Washington College, is the author of many books including Father Abraham: Lincoln’s Relentless Struggle to End Slavery and Lincoln’s Way: How Six Great Presidents Created American Power. 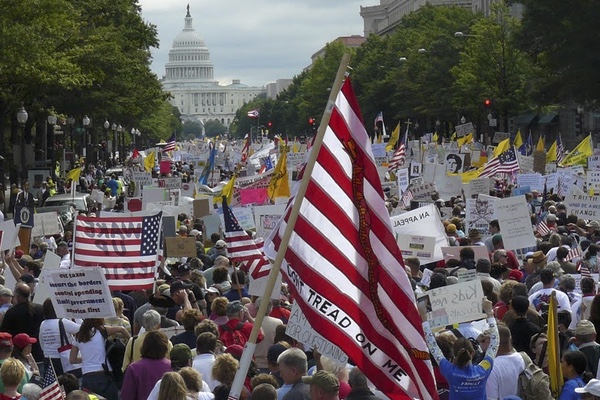 Long after the imagery of Darwinism had been discarded from the rhetoric of free marketeers, their vision of life as an all-out struggle between the “fit” and the “unfit” remained fundamental. The doctrines of the novelist Ayn Rand provide an apt demonstration of this. A militant defender of heroic individualism, Rand condemned what she called the “collectivist” threat to individual freedom. Her novel Atlas Shrugged was based upon the premise that society’s most brilliant individuals will always tend to get dragged down and imposed upon by parasitic mediocrities.

What was notable about Rand —— an iconic figure among libertarians —— was her all-or-nothing reasoning, her tendency to simplify life as a relentless battle between the “individual” and the “collective.” This cartoon-like reduction of the human experience left out a great many complexities: the degree to which, for instance, many of us choose to complement our individual autonomy with social and family reciprocities, relationships that may or may not impinge upon our individuality —— that may or may not devolve into conformist pressure —— that may or may not provide the scope that we need and deserve for our personality development. It all depends upon specifics.

And what about times when we are obviously “all in it together,” for instance in emergencies that threaten us “collectively?” This particular question is germane to the doctrines of another iconic figure among the libertarians, the Austrian-born economist Ludwig von Mises.

Mises, along with his disciple Friedrich Hayek, promoted an insistent version of “classical economics” in the mid-twentieth century, especially in two books that the two men authored, both of them published in 1944: Bureaucracy (by Mises) and The Road To Serfdom (by Hayek). Both of these economists taught that only the force of unregulated enterprise can guarantee freedom and prevent the runaway tyranny of “the state.” They also seemed to believe that economic issues are somehow more fundamental —— more real —— than any others. Mises claimed that “the main issue in present-day struggles is whether society should be organized on the basis of private ownership of the means of production (capitalism, the market system) or on the basis of public ownership (socialism, communism, planned economy). . . . There is no compromise possible between these two systems. Contrary to a popular fallacy there is no middle way, no third system possible.”

Mises was asserting, in effect, that leaders such as Winston Churchill —— a man who was fervently opposed to every form of totalitarianism, whether communist or fascist, but who also supported a number of “middle way” measures such as unemployment compensation, which he helped to initiate in Great Britain between 1909 and 1911 —— were victims of a “fallacy.” This was hardly an inevitable, or even a logical, conclusion to reach about the statecraft of leaders like Churchill. The case can be made that it was Mises who succumbed to a fallacy: what logicians call the “fallacy of the excluded middle.”

It was also telling that Mises and Hayek, both of them writing in 1944, could claim that only free-market principles could be depended upon to stave off the all-grasping state. They wrote this during World War II, when their own native land, Austria, was in the grip of the Nazi state, and when the power of the Nazi state was being broken by countervailing power that was organized, in military form, by other states and not by the random force of unregulated buying and selling. It also bears noting, by the way, that the policies of the Nazi state were consistent with the “private ownership of the means of production,” as industrialists such as the Krupps, for example, could attest.

In light of these fairly self-evident facts, the government-bashers had been generally driven into the political wilderness by the 1960s. And this was especially true since the American economy during the presidencies of Dwight D. Eisenhower, John F. Kennedy, and Lyndon B. Johnson was expanding under an obvious “middle way” regime —— expanding into an unprecedented boom. The anti-government presidential candidacy of Barry Goldwater in 1964 was a catastrophic failure. Ironically, however, some serious infringements of individual liberties occurred in the course of the Cold War: the MK-ULTRA program, for example, in which the CIA under the direction of Allen Dulles tested LSD on people without their knowledge. Several of the victims, in the grip of the resulting hallucinations and fearing that they were going mad, committed suicide. Of even greater irony, the most extreme anti-government group of the time, the John Birch Society, took little interest in the sorts of violations of human rights that occurred in the fight against . . . communism.

It was during the convulsions of the Nixon era, with its heavy-handed “imperial presidency,” that the current libertarian movement came into its own. The new Libertarian Party was founded in 1971. New think tanks such as the Cato Institute and the Heritage Foundation were set up by corporate donors to push deregulation across the board and ridicule government. People at both ends of the ideological spectrum were affected by this sea change in politics. Jimmy Carter’s proclamation in 1978 that “government cannot solve our problems” was part of a post-Watergate left-of-center movement called “Neo-Liberalism,” an obvious misnomer in many respects since it represented less a “new” form of liberalism than a throwback to classical liberalism, Jefferson style.

The turning point for libertarians, of course, was the Reagan era, and the growth since then of the movement and its leaders and its slogans —— Ron and Rand Paul, the Koch Brothers, and the Tea Party —— has proceeded without interruption. The Libertarian Party is now reckoned by some to be the third-largest political party in the United States. The Tea Party holds much of the Republican Party in its grip. It is commonplace these days for Americans to blame a great many, if not all, of the preventable evils in life on “too much government.”

But a national disaster of major dimensions could change all of this right away. And the circumstances of our everyday lives might also impinge upon the libertarian mood over time. For while libertarian attitudes are common in America today, they are also at odds with a great many forms of common sense, and thus at odds with our normal responses to real-life challenges.

We prize our own liberty, true, and we will obviously struggle to defend it —— fiercely if we must —— when it is threatened. But to elevate government above all other possible threats to our liberty is hard to do when push comes to shove. When a natural disaster devastates the region in which we are living and reduces our homes to a shambles —— what then? If vicious thugs invade our homes, what instincts take over as we rush to respond to the invasion? Do we immediately think of warning all the agents of government to watch their step and avoid messing with us? Or do we call 911 and hope the agents of government arrive just as quickly as they can?

James Madison put it this way in The Federalist # 51: “If men were angels, no government would be necessary.” If Mother Nature were also angelic, we would truly have heaven on earth and our lives would be rapture. But a paradise of perfect, uncomplicated, and unambiguous liberty is beyond our power to attain. For when life turns out to be hell —— as it frequently does in a great many ways —— we expect the authorities to help us with the problems that exceed our power to respond.

If they fail to do so, we vote them out of office and bid their successors to be ready the next time we need them.