When Libertarianism Became an Excuse for Plutocrats

This is part two of a three-part series. (Click here for part 1.) Mr. Striner, a professor of history at Washington College, is the author of many books including Father Abraham: Lincoln’s Relentless Struggle to End Slavery and Lincoln’s Way: How Six Great Presidents Created American Power. 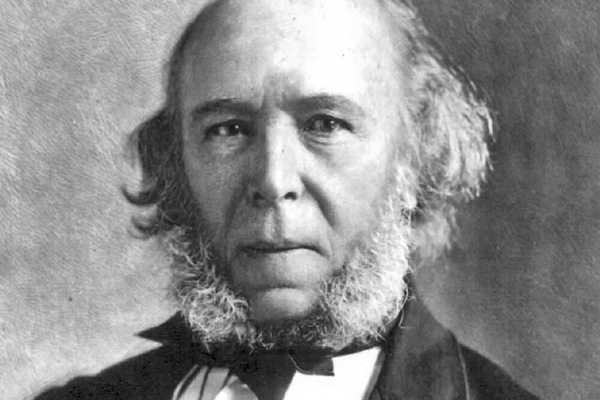 In the second half of the nineteenth-century, the doctrine of minimal government began a decisive migration across the ideological spectrum: many conservatives began to embrace it. As in the eighteenth century, so in the nineteenth century a form of ersatz science was the touchstone for social ideology. This time the poster boy was Charles Darwin, and the result before long was called “Social Darwinism.”

Darwin himself —— a fervent humanitarian and opponent of slavery —— got a bum rap in this association, since he neither coined the term “survival of the fittest” nor advocated a social system based upon ruthless competition. Both the term “survival of the fittest” and the doctrine of dog-eat-dog competition were promulgated by the British philosopher Herbert Spencer.

Spencer typified the mentality that Charles Dickens had attacked in his Christmas Carol; Spencer proclaimed that social dynamics consisted of relentless struggle between the “fit” and the “unfit.” As to the latter, he asserted that “the whole effort of nature is to get rid of such, to clear the world of them, and make room for better. Under nature’s laws, all are put on trial: if they are sufficiently complete to live, they do live, and it is well that they should live. If they are not sufficiently complete to live, they die, and it is best they should die.”

In the 1870s and 1880s, Social Darwinism exploded into popularity among Americans at the top of the social hierarchy; the doctrine was used to resist all efforts on the part of government to help those who struggled down below. Such misguided efforts by government, proclaimed sociologist William Graham Sumner, were unnatural; they spoiled both the operations of “natural law” and the progress of civilization. “If we do not like the survival of the fittest,” Sumner wrote, “we have only one possible alternative, and that is the survival of the unfittest.”

In this way laissez-faire doctrine was appropriated by right-wing advocates of social stratification while at the same time the champions of the downtrodden were increasingly abandoning it. As to the latter trend, liberals on both sides of the Atlantic began to advocate the use of government to reform society. The Populist Party, for instance, proclaimed in its “Omaha platform” of 1892 that “the powers of government . . . should be expanded . . . as rapidly and as far as the good sense of an intelligent people and the teachings of experience shall justify.”

By the 1890s, a widespread critique of Social Darwinism occurred among people who were otherwise convinced that Darwin’s theory of natural selection had some biological validity. Academicians like the sociologist Lester Frank Ward argued that a “rugged individualist” application of evolutionary theory was at odds with the fact that many species in the wilds survive through obvious forms of cooperation and teamwork —— packs of wolves and flocks of birds, for example —— and that if government regulation is renounced as “unnatural,” perhaps the human arts of medicine and agriculture should also be rejected as “unnatural.”

One of the people who played the most consequential role in this revaluation of Social Darwinism was Theodore Roosevelt, a man who was absolutely convinced that individual “fitness” was a key to the mastery of life. But Roosevelt also insisted that nations that were locked in competition with one another had to practice effective teamwork. He also believed that when ruthlessness within society had crossed a certain line, the police powers of the state should be vigorously invoked. Thus he insisted as president upon the creation of the Food and Drug Administration when investigations revealed that Chicago meatpackers had been bulking out their sausages with sweepings from the factory floors —— including rat dung and poisoned rats.

The creed of minimal government became more entrenched over time within conservative thought, and especially so with the onset of the Depression and the New Deal. Even though Franklin D. Roosevelt’s stated intent was to preserve as much of the free enterprise system as possible under the circumstances —— to repair the existing order following its catastrophic breakdown —— hard-line business opponents of the New Deal tended to react to the policies of FDR as nothing less than a gross affront to . . . “the natural order of things.” And so, beginning with attacks upon the New Deal by the newly-founded Liberty League in the 1930s, a steady fusillade of anti-government rhetoric poured from many business organizations —— even mainstream organizations such as the U.S. Chamber of Commerce and the National Association of Manufacturers —— for decades afterward.