Day 3: Highlights of the Annual Meeting of the Organization of American Historians 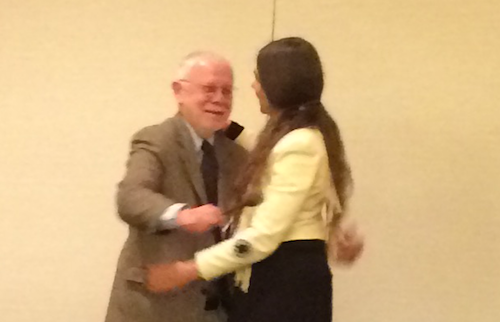 What a day!  Patty Limerick gave one of the most extraordinary presidential addresses in the history of the OAH.  Ferguson and St. Louis activists expressed their rage at police violence.  Former OAH President Darlene Clark Hine delivered an emotional talk about the OAH's courageous stand in 2000 when the organization chose to move its annual convention in St. Louis to protest the Adam's Mark Hotel's racist practices.  And the members present at the Business Meeting overwhelmingly supported a resolution demanding that the Redskins change their name. Oh, and I almost forgot, the OAH named a new vice president who will now be in line to become a future president of the organization:  Earl Lewis, the former provost of Emory, and the current head of the Andrew W. Mellon Foundation. Lewis, who holds a PhD in history from the University of Minnesota, will be the OAH's sixth black president. Finally, there was the expected news that Jon Butler officially took over as president of the OAH.

All that in just one day?

This is a picture of Patty Limerick waiting to deliver her address.

You would not expect a person like this to deliver a conventional presidential address and she didn't.  She told jokes, read off a few limericks (get it?), related funny stories, and managed through it all to deliver a powerful jeremiad as she called on historians to quit writing for each other (and writing badly) so we can reach a broader public.

Her overarching point was that America is afflicted with amnesia and historians are in the best position to cure her of it.  While historians are solving America's problem we can be solving our own:   our growing marginalization.

She called history the Queen of the Disciplines.  She joked that when she said this years ago she got in a lot of trouble with mathematicians and engineers.  But in front of an audience of historians she had nothing to fear.  She clearly was buttering us up for what was to come, the jeremiad part of the talk.  This was when she implored historians to please please please stop writing turgid prose no one can understand or enjoy.

I have said this before and I'll say it again:  Patty Limerick is incapable of being boring.  Even the title of her address was fascinating:  "Historians as Public Intellectuals:  A Cost-Benefit Analysis, Seen from the Interior."  Equally as intriguing as the title and the content of her talk was the manner in which she delivered it.  She set a powerful example for historians to follow in the future by ad libbing her address rather than reading it.  THIS WAS FANTASTIC!  Few, of course, possess the wit and skill to pull this off with aplomb as she did, but it would be nice if others at least tried.

You can -- should! -- watch her address here.  Your reward at the end will be her story about buzzards.  Somehow she successfully manages to draw a lesson for historians from the story, which features buzzards having their feet wired to a tree during the filming of Hud, the movie based on the Larry McMurtry novel starring Paul Newman.

Her talk followed the nearly-unanimous vote at the Business meeting to demand that the Redskins change their name.  You can read about the vote here.  The vote doesn't make this demand official policy of the OAH -- yet.  First, the resolution passed at the meeting has to be adopted by the Council.  But approval is expected.

After Patty's talk came the panel on Ferguson, which was equally unconventional.  At the OAH we're used to hearing from historians.  At this panel we heard from living primary sources:  activists who faced down the police in Ferguson after the shooting of Michael Brown last summer.  The panel, which was scheduled at the inauspicious time of 8pm on a Saturday night, nonetheless drew an audience of a couple hundred people.  The atmosphere was electric and mixed elements of a black church sermon (complete with cries of "That's Right!" from the audience) with an avowedly radical vision of American society as a police state.  I am quite sure I've never seen anything like it at the OAH before and I've been coming to these meetings for some twenty-five years.  Watch and you'll see.  Led by Rutgers historian Donna Murch, the panel amounted to a crie de coeur, a plea to Americans to understand what it's like being black in the St. Louis area.  The media came in for criticism as much as the police.

Earlier in the day former OAH President Darlene Clark Hine recalled what it was like to be at the helm when the organization made the controversial decision to move its convention lock stock and barrel in 2000 from the Adams' Mark Hotel to St. Louis University, a decision that cost the OAH some $90,000 and threatened to bankrupt it.  In this emotional interview she recalls why she was at first reluctant to take a leading role.  The reason has to do with where she was on May 4, 1970.  Historians need little reminding of what happened that day.

And that's just a sampling of the main events of the day.

Here are some of the other things that happened.

Barnard's Mark Carnes trained a group of historians to use games to teach meaningful lessons of history.

Logan Sawyer provided an account of the origins of originalism.

Johann Neem assessed whether Common Core poses a threat to the teaching of history (and how historians are in part responsible for its omission).

Julilly Kohler-Hausmann discussed the ways historians are rewriting the history of the war on drugs.

Oh, and Ben Franklin stopped by a visit: 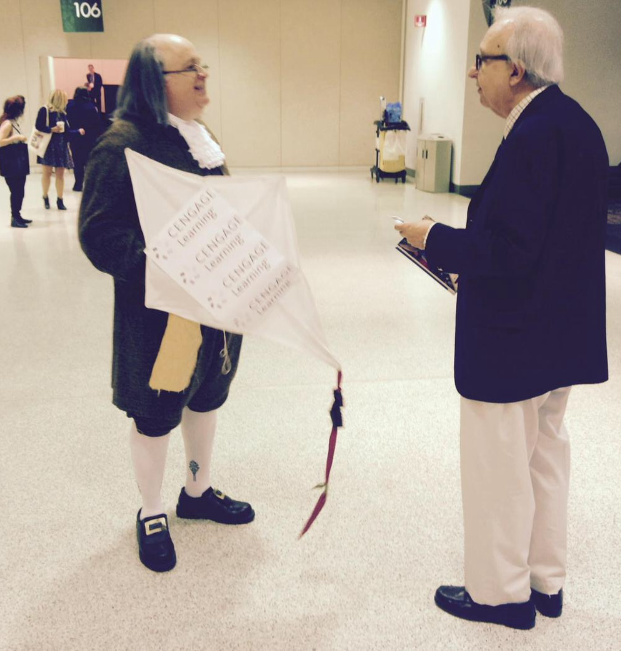 I hope you enjoyed yourself.