The Surprising Reason Why Racial Inequality Is so Great in the United States.

by Graziella Bertocchi and Arcangelo Dimico

Graziella Bertocchi is Professor of Economics at the University of Modena and Reggio Emilia (Italy). Arcangelo Dimico is Lecturer in Economics at the Queen’s University of Belfast (UK). Together they authored the article “Slavery, Education, and Inequality,” published in the European Economic Review, vol. 70, 2014, pages 197-209. 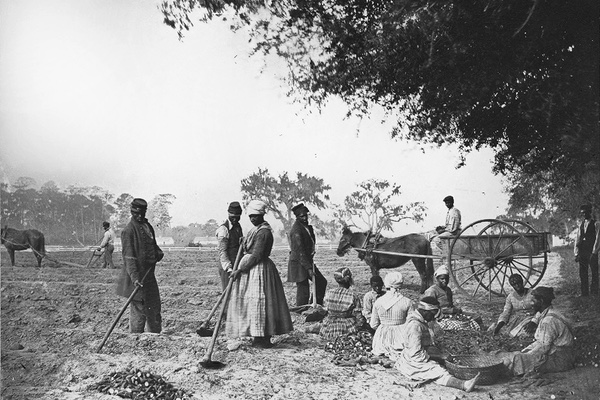 The long-term evolution of income and wealth inequality has become one of the central issues in the current economic and political debate. However, the fact that in the United States inequality displays a strong racial component has not been sufficiently emphasized in the recent discussion.

We asked ourselves whether a link could be found between current inequality and the past history of racial relations in the US. There is no doubt that the latter were profoundly shaped by the reality of slavery. Indeed, when we compare the performances of US counties, we find that income inequality in the present day is strongly correlated with the share of slaves in the population back in 1860. Besides, we discover that this finding is driven by the racial component of income inequality. This means that those counties that in the past relied more heavily on the use of slave labor are still showing a larger degree of inequality between blacks and whites. This correlation stubbornly persists a century and a half after the abolition of slavery, despite the subsequent massive relocation of former slaves away from the deep South where slavery was more prevalent, and notwithstanding the progress achieved by civil rights movement.

We then asked ourselves what is the driver of the link we uncover between the history of slavery and current inequality. Our hypothesis was that the long-term influence of slavery may have run through its negative impact on human capital accumulation for blacks, that is, through a persistent racial gap in education.

After the Civil War, the vast majority of African-American former slaves had no exposure to formal schooling. For the first generations of their descendants, access to education remained severely limited, both quantitatively and qualitatively, since they were able to complete fewer years of schooling and they were segregated in badly funded public schools. Being education locally administered and financed, the political exclusion of blacks inevitably resulted in a limited supply of education and reduced funding. The separate but equal doctrine permitted the racial segregation of southern schools until the 1960s. After the enactment of the civil and voting rights legislation, the racial schooling gap declined substantially in several dimensions, such as educational attainment and achievement, literacy rates, spending per pupil, and economic returns to education.

However, what our data say is not only that the gaps are still far from closed, but also that they can be largely explained by past slavery. In other words, the share of slaves in the population in 1860 is also correlated with current racial inequality in school attainment. Since the quantity of human capital is the main determinant of earnings, it follows that the schooling gap has immediate repercussions on income inequality across races.

To sum up, we can trace a chain of clear causal links that from past slavery lead to today’s racial gap in education and, through that channel, to the racial gap in income, which in turns contributes to income inequality.

The declared goal of recent federal education programs – such as Obama’s Race to the Top and Bush’s No Child Left Behind – has been the removal of the racial and ethnic educational gaps that persistently afflict the American society. This goal is consistent with the evidence we collect, which shows how deeply educational inequality is rooted in the history of the country.