This Is Why We Should Remember the Battle of Okinawa

Ota Masahide is an Okinawan academic and politician who served as governor of the prefecture from 1990 to 1998. He has written many books on Okinawa, of which the best known is his account of the Battle of Okinawa as he saw it as a high school student member of the Blood and Iron Student Corps. This article has been adapted from "Descent Into Hell – Civilian Memories of the Battle of Okinawa," which is based upon the "Senka o Horuseries" of articles published by the Ryukyu Shimpo from 1983-85. The English translation was published in 2014. HNN's excerpt first appeared on the website of Japan Focus, which carries a longer version. 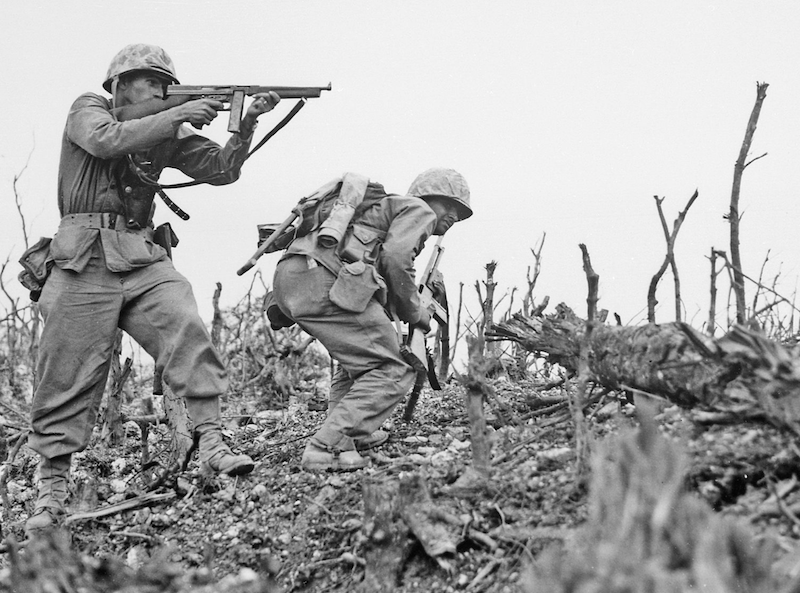 Two Marines from the 2nd Battalion, 1st Marines advance on Wana Ridge on 18 May 1945. (Wikipedia)

The Battle of Okinawa was distinct from all other battles in the Pacific War in that it was fought in one of the 47 prefectures of Japan, with the majority of the resident civilian population still present. While Iwo-jima, the island that served as a stepping-stone to Okinawa for US forces, was also Japanese territory, its residents had been forcibly evacuated months before, so the only people on the island when the US forces landed in February 1945 were the Imperial Japanese Army (IJA). The fighting in the Battle of Saipan in the middle of the previous year saw many Japanese settlers (mostly Okinawans) caught in the crossfire, but the Mariana Islands were not inherently Japanese territory. The islands had been controlled by Germany until World War 1 and in 1922 were entrusted by the League of Nations to Japan as mandate territories. While the people living in urban centers on the main islands of Japan were of course victims of merciless incendiary bombing in the latter stages of the war, Okinawa was the only prefecture to experience combat on the ground.

The scale of Operation Iceberg and the disparity in the size of the respective forces is noteworthy. The United States mobilized approximately 1500 naval vessels carrying 548,000 men to launch the invasion of the small islands of Okinawa. In 1945 the population of the prefecture of Okinawa was less than 450,000 people so the total US forces actually outnumbered the residents of Okinawa. In contrast to the huge numbers of US troops available, if we include the locally recruited and poorly trained Home Guard and Student Corps child soldiers, the Japanese forces deployed on Okinawa numbered 110,000, just one-fifth of the American strength.

The horrifying extent of civilian casualties is a key feature of the battle. Over 140,000 people, or about one third of the population, died in the course of the battle and its immediate aftermath. As documented in the articles that make up this book, hundreds of families were completed wiped out. Needless to say, most families in the prefecture will have the name of at least one deceased relative engraved on the Cornerstone of Peace, the marble tablets in Mabuni that bear the names of the more than 240,000 combatants and non-combatants of all nationalities who died in the battle. Among the civilian casualties were members of the Home Guard, as well as teenage soldiers recruited without any basis in law into the Blood and Iron Student Corps and young girls co-opted into nurse’s aide units. Among the civilian deaths was the significant loss of life of Korean young men and women press-ganged into serving as laborers or comfort women.

Another characteristic of the Battle of Okinawa was the incidence of group suicide and parricide among civilians terrified at the prospect of being captured by an enemy portrayed by Japanese soldiers as monsters. This had also occurred in Saipan the previous year, and the Japanese media, by extolling those who took their lives in this way, helped to set the scene for it to occur in Okinawa. While the extent to which Japanese soldiers were involved in encouraging or even compelling locals to take their own lives or kill loved ones has been the subject of heated debate in recent years, including court cases initiated by relatives of Imperial Japanese Army commanders suing for libel. This work covers some of these tragedies.

The use of “special-attack units” (kamikaze) is also a well-known aspect of the battle. Over 3,000 young men lost their lives carrying out suicide attacks on ships of the U.S fleet sitting off the coast of Okinawa and 4,900 US sailors were killed as a result. In an era when suicide bombers are painted as religious fanatics, it is important to understand that by and large the pilots who flew on the one-way missions to the seas off Okinawa were relatively well-educated young men driven to contribute to saving their country from what they believed would be obliteration. After all, in the months before the Battle of Okinawa Japan’s urban centers, and tens of thousands of their residents, were being incinerated at a pace that seemed to give credence to the call that only a Divine Wind (kamikaze) could save the nation from destruction. Japanese military leaders, and the Emperor, believed that one last furious roll of the dice would see the United States and its allies accept peace terms that allowed Japan’s national polity (its national essence with the emperor at the head) to remain in place. As it happens of course, rather than helping to bring the war to an end on acceptable terms, the ferocity of these kamikaze attacks resulted in pressure being brought to bear by the US Navy on the commander of the ground forces on Okinawa, Lt. Gen. Buckner, to bring the land campaign to an end as quickly as possible. This, it is argued, may have seen him opt for a costly, blunt-instrument approach rather than a slower but less costly second landing.

If we look at losses suffered by both sides in the Battle of Okinawa, while the US forces lost more than 12,000 men killed (with a total of 72,000 either wounded or victims of combat fatigue), the Japanese military lost over 70,000 men with more than 140,000 Okinawans being killed. In addition 10,000 Japanese soldiers were taken prisoner. When describing the battle, Hanson W. Baldwin of the New York Times wrote: “Never before had there been, probably never again will there be, such a vicious sprawling struggle.” In every sense of the word, the battle was vicious in the extreme. That the commanders of both sides died in the battle is testimony to the all-encompassing reach of the casualties.

The horrific death toll and the fanatical resistance by Japanese forces affected the thinking of US leaders and was a significant factor leading to the decision to drop atomic bombs on mainland Japan.

Another feature of the battle was that Okinawa was a “sute-ishi” (sacrificial stone in the Japanese board game of go) cast away in a desperate attempt to save the main islands of Japan. The Japanese Imperial Army’s objective was not to protect the local Okinawans, but instead to engage in combat for the longest time possible, and to inflict the maximum casualties on the Americans in order to earn time for further defensive preparations on the home islands. Rather than putting efforts into evacuation or the creation of a safe zone for civilians, the Okinawan people were used as a source of labor to build shelters, tunnels and other emplacements, to supplement combat units and to tend to wounded soldiers in circumstances aptly described by the title of this book. With the Imperial Japanese Army supplying itself in the field, having civilians close at hand suited them until the US forces landed, when the common view among the commanders of the 32nd Army changed to civilians being potential spies or merely bodies taking up space in caves and shelters.

The Japanese Army’s heartless approach to ejecting local civilians from caves was matched by their killing hundreds, perhaps even thousands, of their own soldiers who were too badly wounded to retreat southwards from hospital shelters.

Through the Battle of Okinawa the people of the prefecture learned a valuable lesson. They came to understand that the military was motivated solely by its own organizational imperatives, existing to protect abstract concepts of national polity and the imperial system, and that in no sense did it serve the function of protecting the lives of non-combatants, that is, the Okinawan people. The fact that that lesson was learned at the expense of well over 140,000 Okinawan lives means that even now, nearly 70 years after Japan was defeated in WW2, the people of Okinawa still value that lesson and sincerely strive to create a peaceful world.

It is important for English speaking readers who read Descent into Hell to understand that the origin of all current affairs is to be found in past history. Those who look at the situation that prevails in Okinawa now and sense a growing antagonism among the prefecture’s residents towards the presence of US military bases need to be reminded that it was not always like this. Today’s situation can be traced back firstly to the Battle of Okinawa and then to subsequent agreements between the governments of Japan and the United States.

We should remember that from even before the end of the battle, while the residual elements of the Japanese 32nd Army were forcing Okinawans out from caves into the relentless bombardment in southern Okinawa, specially organized units of the United States military were already providing food, clothing and shelter to displaced residents in areas that it had secured. The US forces had planned ahead and prepared for this contingency and their kindness in this respect no doubt saved tens of thousands of Okinawans from death by starvation. The years immediately following the surrender of Japan were marked by strong of feelings of gratitude among Okinawans towards the United States for its efforts to avoid a humanitarian disaster. These feelings continued until the governments of Japan and the United States colluded to concentrate an unfair proportion of the US military presence in Okinawa, including nuclear weapons, and highly toxic defoliants for use in the Vietnam War. The current situation in Okinawa may give the impression that ill feeling has prevailed for much longer than is actually the case. I encourage all who have an interest in Okinawan affairs to equip themselves with a knowledge of the civilian experience in the battle for these islands fought almost seven decades ago.