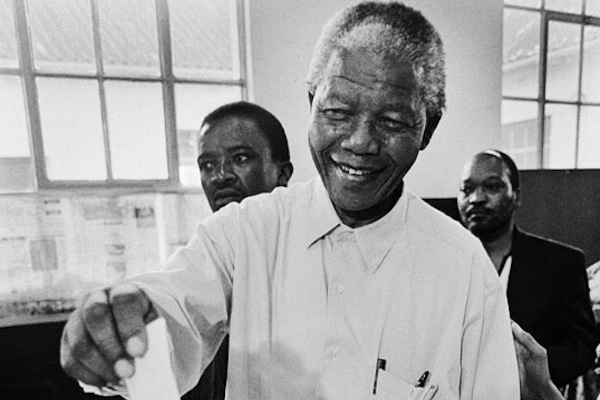 Nelson Mandela casting his vote in 1994. Image via Wiki Commons.

Nelson Mandela, who passed away on Thursday at the age of ninety-five, has been a global icon for decades. His life story is truly the stuff of legend. Born into an aristocratic Thembu family in 1918, Mandela saw the imposition of the brutal apartheid regime in South Africa in 1948, became one of the most prominent leaders of the African National Congress before his arrest and imprisonment in 1962, and spent twenty-seven years in prison before being released in 1990 -- becoming a global icon in the process. And he wasn't finished. After his release, Mandela helped to negiotiate an end to the apartheid regime and became the first president of a free South Africa in 1994, campaigning on a platform of national reconcilation. And he still wasn't finished -- by stepping down after a single presidential term and retiring to private life, Mandela set a critical democratic precedent for South Africa, drawing comparisons to George Washington.

I spoke this morning with Judith Byfield, an associate professor of history at Cornell University and a specialist on African history, about the life and legacy of Mandela.

Professor Byfield is the author of numerous books and articles on colonialism, nationalism, women's history, and the African diaspora. Here most recent is Gendering the African Diaspora: Women, Culture, and Historical Change in the Caribbean and Nigerian Hinterland, which she co-edited with LaRay Denzer and Anthea Morrison.

How is Nelson Mandela viewed in Africa today?

Mandela is appreciated for the tremendous personal integrity he displayed over all these years. The fact that he stepped down after his first term as president of South Africa, that's going to be, I think, one of his lasting legacies on the continent, especially given that you'd had so many leaders who have not seen fit to step down at the appointed time. I think that's his political heritage.

How did his twenty-seven years in prison shape Mandela's vision for South African society?

Mandela talked often about the indignities of the apartheid system, and that really underscored his whole time in prison. I just heard an interview with one of his fellow prisoners this morning, a man of Indian ancestry – “Indian” was one of four racial categories under apartheid, the others being “Black,” “White,” and “Coloured” – and he was allowed wear long pants in prison. Black African prisoners had to wear short pants.

We had the vice-chancellor of the University of the Free State, Jonathan Jansen, visit Cornell this October, and he too talked a lot about dignity and that this is increasingly a part of their political discourse. Human rights is one thing -- the right to vote, the right to live where you want, all of those things are important -- but there's also this recognition that acknowledging the dignity of our personhood matters, too, and it needs to be part of our political discourse. I think that's something that flows through from Mandela.

Are there any misconceptions that you feel are particularly widely-held by Americans about Mandela and South Africa both during and after apartheid?

Because the Cold War was the lens through which so many Americans looked at apartheid South Africa, I think many people accepted that Mandela was deemed a terrorist by the South African state. There was a particularly vigorous debate about this during the Reagan years, when Congress considered sanctions against South Africa. Mandela was only taken off of the U.S.'s terrorist watch list in 2008!

But I think this was a misconception. Mandela certainly did support an armed campaign, though the actual armed struggle against apartheid used sabotage more than anything else. I think there was a concerted effort on the part of the Umkhonto we Sizwe, which was the armed wing of the African National Congress, not to take lives, but to destroy institutions that were representative of the apartheid state.

Part of what people missed is that the struggle against apartheid was part of a much larger political project, and the ANC's armed struggle began only after the apartheid state's constant willingness to ignore the demands of the overwhelming majority of the population. Well into the 1970s and 1980s, the South African government was still trying to justify a segregated society.

I also don't think people really wanted to understand the magnitude of the damage that apartheid did to such a large population, and that the damage wasn't just limited to South Africa. All of southern Africa was affected by the apartheid state, and I'm referring to the efforts by the South African government to work against the liberation movements in Mozambique and Angola -- and Zimbabwe for that matter -- all to save apartheid. The South African government understood that the success of the liberation movement in those states meant that there were more spaces of support for the ANC and the Pan Africanist Congress in South Africa, and the other groups that were part of the liberation movement. But the apartheid state was not insular in its destruction. It really had a regional impact on the continent.

There has been so much written about Mandela in the past twenty-four hours as the single most important figure in South Africa's peaceful transition from apartheid. Was Mandela really so important?

Mandela was pivotal, but he was pivotal in part because he had the support of so many other segments of South African society. He couldn't have succeeded without the support of the labor movement, he couldn't have succeeded without the support of many white liberals and radicals in South Africa. He also had the support of the United Democratic Front, lead by Allan Boesak and Desmond Tutu. So, at the same time that he became a figurehead around which these different groups could rally, he was only able to do that because of that widespread support. It's important to appreciate, too, that the ANC wasn't the only political organization in South Africa. There were also groups and factions within the ANC, too. But I think one of the things he was able to do at that very critical juncture was to help people still act in a collective way rather than descend into different constituencies that were fighting for power.