Revisiting Kropotkin 180 Years After His Birth

Sam Ben-Meir is an assistant adjunct professor of philosophy at City University of New York, College of Technology. 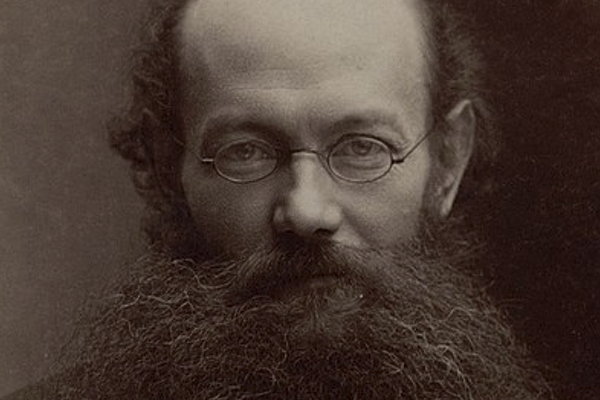 “Anarchism is an aspect of socialism (among many others) that those of us wishing socialism, or some comparable form of resistance, to survive will have to think about again, this time without a prearranged sneer.” T.J. Clark, Farewell to an Idea

This December 9th marked 180 years since the birth of Pyotr Kropotkin (1842-1921), the great Russian anarchist, sociologist, historian, zoologist, economist, and philosopher. Now, of all times, we should be remembering, revitalizing, and creatively reconstructing his legacy.

One might assume that a 19th century Russian anarchist would have nothing to say that could possibly have real bearing on the world today, that his political philosophy, whatever relevance it might have once held, had been long surpassed. I would dare to venture another point of view: not only are we unable to justify confining Kropotkin to the history of ideas—or worse, the dustbin of history—rather, this is a thinker that remains still ahead of us, a thinker whose vision has yet to be truly realized. We have not yet caught up with Kropotkin, but there are indications that conditions more favorable to receiving his thought are on the horizon, and that perhaps there is a day approaching when we may even begin to see his ideas implemented on a scale that could radically transform our communities and, most especially, our workplaces.

Kropotkin’s importance for us has only grown because the material conditions, the post-scarcity, the technological advances, have made it possible, no doubt for the first time in history, to truly realize his vision of unfettered human creativity. There is one chapter in The Conquest of Bread (1892) that I want to focus on because it may surprise those who are new to anarcho-communist political philosophy. The chapter is entitled "The Need for Luxury," and his thesis is quite a simple one: “After bread has been secured, leisure is the supreme aim.” The anarchist commune—or what is sometimes referred to today as “luxury communism”—recognizes “that while it produces all that is necessary to material life, it must also strive to satisfy all manifestations of the human mind.”

We can agree with Aaron Bastani, who argues in Fully Automated Luxury Communism (2020) that, “There is a tendency in capitalism to automate labor, to turn things previously done by humans into automated functions. In recognition of that, then the only utopian demand can be for the full automation of everything and common ownership of that which is automated.” Bastani is talking about using the levels of post-scarcity and automation that we’ve attained to finally usher in a society free of drudgery, toil, and where the full range of tastes can be satisfied.

Given the multiple crises we are facing, the general name for which is global capitalism, how should we answer the question famously posed by Lenin, “What is to be done?” There are at least three basic principles which can be derived from the work of Kropotkin, and that can and should strategically guide us as we move forward. The first is ending the tyranny of private property which has produced greater economic inequality today than we have ever seen in the history of the world. The concentration of capital has produced a condition in which a handful of individuals possess wealth exceeding that of the combined wealth of the billions of people who share this planet. So, as the great French philosopher Alain Badiou has also reiterated, our first principle must be that of collectivism in opposition to the dictatorship of capital: “It is not a necessity for social organization to reside in private property and monstrous inequalities.”

The second principle involve democratizing our workplaces, through worker self-management, or more precisely through what the economist Richard Wolff calls "worker self-directed enterprises" – in a word, economic democracy. Experiments with non-traditional, non-hierarchical firms, have largely met with success. Perhaps the greatest example is Spain’s Mondrian Corporation, but there are many others. So that we are well past the stage of asking ourselves whether such non-capitalist forms of organization can succeed and be competitive. It has been amply proven that they indeed can.

The non-capitalist reorganization of our workplaces would undoubtedly improve the condition of workers, which is under assault around the world. In countries around the world, union leaders are routinely threatened with violence or murdered. Indeed, the International Trade Union Confederation reports that 2019 saw “the use of extreme violence against the defenders of workplace rights, large-scale arrests and detentions.”  The number of countries which do not allow workers to establish or join a trade union increased from 92 in 2018 to 107 in 2019. In 2018, 53 trade union members were murdered — and in 52 counties workers were subjected to physical violence. In 72 percent of countries workers have only restricted access to justice, or none at all.  As Noam Chomsky observed, “Policies are designed to undermine working class organization and the reason is not only the unions fight for workers' rights, but they also have a democratizing effect. These are institutions in which people without power can get together, support one another, learn about the world, try out their ideas, initiate programs, and that is dangerous.”

And third, it is time we recognize, as Badiou put it two weeks after the election of Trump, “that there is no necessity for a state in the form of a separated and armed power.” The principle of free association as opposed to the state is one that anarchism has long advocated. But we need to be clear here: anarchism is usually taken to mean, if anything, opposition to all government or to government as such. In fact, this is a mistakenly one-sided view of anarchism, and it certainly does not represent a nuanced understanding of Kropotkin, who made a clear and sharp distinction between government and the state.

Anarcho-communism is opposed to the state inasmuch as it represents centralized power in the hands of a few, hierarchical relationships and class domination. But Kropotkin was not necessarily opposed to a condition of society in which certain elements of decentralized community government remain. Martin Buber underscored this point: Kropotkin’s “‘anarchy,’ like Proudhon’s, is in reality ‘anocracy’; not absence of government, but absence of domination.” The distinctive feature of anarchist programs is not that governments are excluded from the process and without any meaningful contribution to make. The essential characteristics are voluntarism, antiauthoritarianism, the decentralization of political authority, worker self-management (economic democracy), and in general a tendency to address social problems from the bottom up, rather than by imposing solutions from the top down.

Kropotkin was one of Russia’s finest minds, and one that was among the most dedicated to the ideals of which we are in danger of completely losing sight. There is no better time than now to salvage the very best of Russian thought, to reaffirm its universality, its inherently critical posture towards authoritarianism, and the self-destructive pursuit of power through violence.