Robert E. Wright (Ph.D., History, SUNY Bufalo, 1997) is a Senior Faculty Fellow for the American Institute for Economic Research and the (co)author of 24 books on economic and policy history.

They are the coauthors of Fearless: Wilma Soss and America's Forgotten Investor Movement 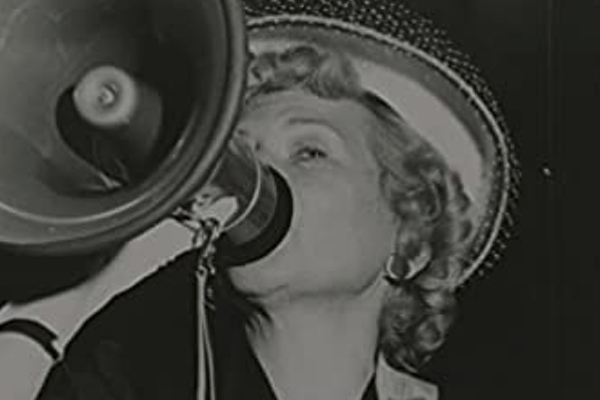 Cancel culture is big news because of the novel way it is being done, via social media. But it's actually an age-old practice called social ostracization. Shunning and shaming anyone over mere words, especially in a country that celebrates free speech, is rarely justified, so we hope to see many cancellations reversed.

We especially hope to uncancel Wilma Soss. Chances are, you’ve never heard of her, unless here at HNN. But you should have! One of the most prominent shareowner activists of her time – and a well-known female radio host– Soss (1900-1986) was a household name in America in the 1950s, 60s, and 70s. Solid Gold Cadillac, a hit Broadway play and Hollywood movie with A-list actors, was based on her life and persona. High profile magazine articles chronicled her exploits, and high circulation newspapers like the New York Times frequently discussed her activities. Plus, Soss’s voice enlivened households on a weekly basis with her popular radio show, “Pocketbook News,” that ran on NBC radio from 1957 until 1980.

We think powerful players effectively canceled her the moment she could no longer defend herself, but that today she deserves renewed recognition and respect, especially among those who consider themselves progressive. Yet Soss does not have a Wikipedia page and except for a few obits and some mentions in law review articles hardly anything has been written about her since her death in 1986. Until, that is, Fearless, our biography of her, hits bookstores on August 30.

Social ostracism has a long history that needs to be carefully distinguished from exclusion from an organization. Getting excommunicated by the Pope, disowned by Quakers, or ejected from a securities exchange or country club for bad behavior is different because rules were broken, evidence assessed, and formal decisions rendered. Social ostracism is less formal and ultimately enforced only by individuals deciding not to interact with accused offenders. Abolitionists and slaveholders canceled each other in the 1830s, for example, as did teetotalers and drinkers.

Ostracization, shunning, or cancellation is not the only sanction that social groups use to punish unacceptable behaviors or beliefs. Another, called rough music or charivari, entailed singing bawdy songs and banging on pots and pans outside the offender’s house in the night. Wrecking someone’s dinner out is one modern equivalent.

Many instances of charivari entailed efforts to enforce community gender and marriage norms. The traditional practice had largely died out in urban America by the time Soss married in the early 1920s, but her then very unusual relationship with her husband Joseph Soss was precisely the sort of thing that earned people a scary midnight serenade. In the 1930s and 40s, Soss, born Wilma Porter Weissman, not only continued to work but out-earned her spouse, likely by a large margin due to the stunning success of her PR consultancy. And after the Second World War, she made her own investment decisions and formed a nonprofit to help other women to do the same. Joe supported Soss in all her endeavors, but others were not so enamored of her daring efforts to challenge conventions.

Throughout her career, especially as a corporate activist, Soss downplayed her marital status as much as possible. But she couldn’t downplay the fact that she was a woman, and an attractive and fashionably dressed one at that. Worse, she developed independent ideas that she shared widely in print, on air, and, most scandalously of all, in rooms full of men during annual stockholder meetings. Unescorted by her husband Joe! Not only did Soss not defer to her not-so-natural superiors, she sometimes spoke so much that she was ordered to be physically escorted from meetings by big, burly Pinkerton detectives hired by corporations to keep meeting-goers in line.

But the most troubling thing of all was that Soss spoke truth to power. Too many CEOs paid themselves too much, engaged in shady accounting and other business practices, and abused their power during shareholder meetings. They ignored Robert’s Rules of Order, cut her microphone, and blocked voting reforms, like for cumulative voting and secret ballots, that would have checked their power to some extent.

Soss was too savvy and fearless to be fully canceled while she lived, hiring her own bodyguards and employing megaphones when necessary. But when she died with no close living relatives and only one young friend, Evelyn Y. Davis, more concerned with making her own name than protecting Soss’s, canceling her was as easy as never mentioning her name. \

When our biography of her hits, however, Soss will be uncancelled. Not everyone is going to agree with everything she did or said but everyone will agree that her story is an important one that deserves to be retold, perhaps again by Hollywood. Norms change and Soss very much helped to bring about some of the better current ones.