This Was the Real Life “Fearless Girl”

Robert E. Wright and Janice Traflet are currently in the process of co-authoring a book about Wilma Soss. Traflet is associate professor of management in Bucknell University’s College of Management and is the author of "A Nation of Small Shareholders: Marketing Wall Street After World War II" (Hopkins 2013) . Wright is the Nef Family Chair of Political Economy at Augustana University and the author of 20 books including, most recently, "The Poverty of Slavery: How Unfree Labor Pollutes the Economy" (Palgrave 2017). 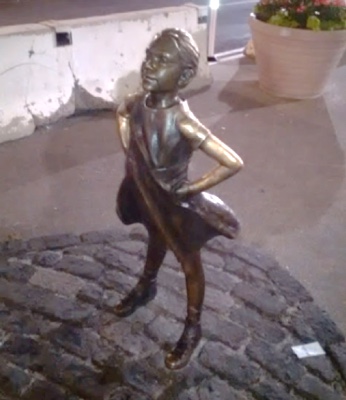 Every once in a while, a piece of art strikes a particularly resonant chord with the general public. People identify with it. Some see themselves and their plight somehow reflected in it. Perhaps too the artwork challenges and uplifts them. All this was the case when the “Fearless Girl” bronze statue suddenly appeared on Wall Street’s Bowling Green in the early morning of March 7th, 2017.

The statue depicted a diminutive young girl, arms at her hips, hair in a flippant pigtail, defiantly staring down another sculpture—the enormous “Charging Bull” erected in 1989 by Arturo DiModico. Immediately, Fearless Girl sparked intense public interest, igniting a social media firestorm as many hailed it as an inspiration to women and a call for more gender equality in the workplace. Thousands of tourists—many of them mothers and their daughters—snapped their pictures with Fearless Girl and posted it to Facebook and Instagram.

The statue, which was sponsored by State Street Global Advisors and its advertising agency, McCann New York, debuted just in time for International Women’s Day on March 8th. As reported in a New York Times story of the statue, Stephen Tisdalle, Chief Marketing Officer for State Street Global Advisors, explained that the company was seeking an effective way to promote the importance of gender diversity in corporate America. The company specifically sought to encourage other companies to do as State Street had done, putting more women on boards and in other key leadership positions. As Tisdalle remarked, “What this girl represents is the present, but also the future.”

The Fearless Girl bronze statue also represents the past. While there have been many women pioneers on Wall Street (Hetty Green, Victoria Woodhull, and Muriel Siebert are just a few to spring to mind), there is just one woman who embodied Fearless Girl. In her life, this woman often portrayed herself as a little girl fighting the male establishment in corporate America. As she said in a June 1949 interview for the New Yorker magazine, “There is a little girl with a finger in the dike who may just possibly save the private-enterprise system.” 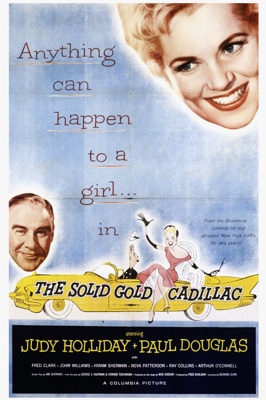 The movie loosely based on Wilma Soss

The woman was Wilma Soss, a name most people today do not recognize. (She does not even have her own Wikipedia page.) In her day, however, Wilma was so well-known that a play and a movie (Solid Gold Cadillac) was loosely based on her life. Wilma had a very popular financial talk show on NBC radio (Pocketbook News) and also for decades she ran the Federation of Women Shareholders in American Business (FOWSAB), a not-for-profit organization she herself founded. Wilma thought nothing of standing up during corporate annual meetings to chastise and take on high-powered male chief executives and all-male boards of directors who she felt were not acting in the best interests of the shareholders. The shareholders, she liked to remind everyone, were the true owners of American corporations.

Like the Fearless Girl, Wilma hoped to save the private-enterprise system in part by getting more women appointed to corporate boards of directors. She told the New Yorker: “Put them [women] on boards! Humanize the corporation! It’s a shameful fact that women own companies [through owning shares] but can’t get top jobs in them.” When some CEOs of companies she targeted finally appointed women to their boards, Wilma took credit for the accomplishment and continued to press other companies to do similarly. She was relentless in her quest to diversify companies, and she seemed to genuinely believe that getting more women on boards would improve not just the financial performance of companies, but also the character of corporate America as a whole.

In March 1951, Wilma told Andy Logan from the New Yorker, “The only thing that really ought to surprise anybody…. is that I reached such an advanced age before I tumbled to the obvious fact that women are the only hope American business has left. What’s wrong with the people running American corporations today?” She went on, “Naturally, we owners have a right to give the hired help a few constructive suggestions from time to time, and I am always astonished that they aren’t more appreciative of what we women are doing for their own good. After all, Mother knows best.”

Not everyone approved of Wilma’s message or the confrontational tactics she sometimes utilized to gain media attention to her shareholder causes. (Besides gender diversity on boards, she also pressed for other corporate reforms, such as executive compensation limits, secret ballots, and proportional voting of shares.)

Likewise, not everyone has been a fan of Fearless Girl. In letters to the editor in the New York Times commenting on the statue, some have expressed skepticism at the wisdom of a four-foot girl challenging a charging bull. Others have noted with disapproval the notion of a “girl” not a “woman” taking a stand. As James Barron from the New York Times has reported, even the designer of the Charging Bull statue, Arturo DiModico, has lamented that Fearless Girl misconstrues the intent of his own statue, which he says was to herald the resilience of Wall Street after the 1987 Crash. (Incidentally, DiModico has threatened to sue for copyright infringement.) But perhaps the criticism most relevant to Wilma Soss is the contention that somehow the little girl statue foments a “false feminism,” as New York Times reporter Ginia Bellafante phrases it. As Bellafante explains: “To believe that women can provide a certain kind of salvation in this sense — to speculate that we might have avoided the 2008 financial crisis entirely if only for a little more Girl Power — requires its own brand of sexism: the belief that women just don’t have what it takes to be as greedy as men.” She expresses doubt that more women on boards would have prevented corporate scandals from occurring. But certainly, Wilma Soss, like Fearless Girl, thought that more women in leadership positions indeed would have a purifying effect on business.

While some might perceive Wilma to be naïve and/or idealistic, she was in fact a savvy business professional. Prior to dedicating herself to being a professional corporate gadfly, she had worked for decades in public relations. Wilma received her start in that business in the 1920s as assistant to the press agent Harry Reichenbach, a publicity stunt artist who staged fake kidnappings of actresses set to appear in films he was promoting. Wilma knew the power of free publicity, and in an age before Facebook and Twitter, she nevertheless understood how to garner media attention and mobilize public opinion to her side. She wouldn’t think twice of appearing at a corporate annual meeting dressed in some costume to hammer home her point and get her picture—and her cause--in the papers. At a U.S. Steel meeting, Wilma once memorably appeared in full Victorian era garb to emphasize that the company’s board composition and other practices were terribly out-of-date. Later, deeply upset at the quiz show scandals in the early 1960s, she came to CBS’s annual meeting with a mop and pail, to highlight the need to clean CBS’s house. Wilma was bold, never fearing to speak her mind, even if it provoked some people’s ire.

When the McCann New York advertising agency appeared on Broadway at 4 am on March 7, 2017 to surprise Wall Streeters, and indeed the world, with Fearless Girl, Wilma Soss undoubtedly would have thoroughly approved. She would have loved not only the intent behind the statue, but also the stunt-like nature of its unveiling. And since she was the original Fearless Girl, Wilma also would have wanted the statue to become a permanent fixture on Bowling Green, always staring down the Raging Bull, always proudly defiant, and always triumphant.