What Prohibition History Tells Us about Returning Abortion to the States

Richard F. Hamm is SUNY Distinguished Teaching Professor and a member of the History Department at the University at Albany, SUNY.  His most recent work on alcohol in American history is Prohibition’s Greatest Myths:  The Distilled Truth About America’s Anti-Alcohol Crusade Michael Lewis and Richard Hamm, editors, (Baton Rouge: Louisiana University Press, 2020). 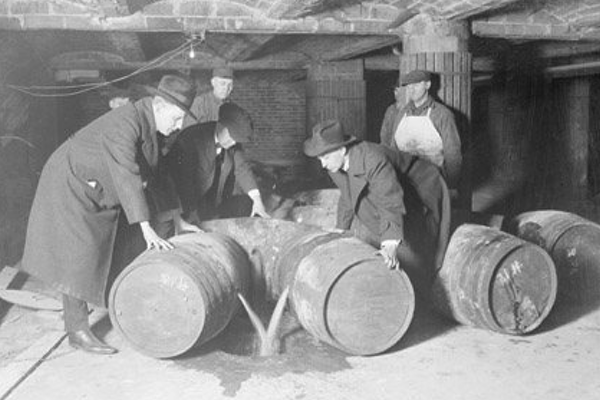 Samuel Alito’s leaked majority draft opinion announcing the end of Roe v. Wade will throw the policy of abortion to the states, but the history of alcohol prohibition tells us that it is unlikely to stay there. Like the anti-abortion movement, temperance was driven by a religiously defined worldview. Many Protestant Americans embraced prohibition as solution for what they saw as real problems, as well as a cultural stand. To them, consumption of alcohol was a sin, and sellers and manufacturers of alcohol were the equivalent of today’s drug pushers and cartels. Also like the anti-abortion movement, temperance first proposed sweeping national solutions but gained its real victories in the states. By the 1880s, a handful of prohibition states existed, in name. Their policy was undercut by the easy importation of alcohol from other states. Such imports were protected by the federal government’s control over interstate commerce. The flow of legal liquor into dry states prompted calls for federal legislation to stop the sending of liquor into dry jurisdictions.

The first effort failed, but set the pattern for later laws. An 1890 federal act said that states could treat interstate imported liquor as if was produced internally, but it was limited by the Supreme Court in 1898. In the 20th century, the rise of a new temperance group, the Anti-Saloon League (ASL) revitalized the anti-alcohol movement, state prohibition, and eventually prompted effective federal enabling legislation. The template for a single-issue lobby, the ASL called itself “The Church in Action against the Saloon,” and it adopted both pressure politics and incremental measures short of outright prohibition to achieve its goal of restricting alcohol. With their allies in the Woman’s Christian Temperance Union and the Methodist Church, they dried out much of the nation, especially rural areas in many states, through local option and states in the Midwest and South through state prohibition laws. In many of those new prohibition states there was a personal use exception allowing people to import liquor for their own use. A thriving shipping and mail order industry supplied this legal liquor and some of it was diverted into illegal channels.

As the ASL’s political power grew, it sought federal legislation to stem the flow of liquor into the areas that had forbidden the sale of alcohol. In 1907, drys won the passage of a federal law (called the COD Act) that restricted the flourishing cash-on-delivery interstate liquor trade. In 1913, they won a very significant victory when their Congressional allies passed the Webb-Kenyon Act over President Taft’s veto. This law made it illegal to send alcohol into any state where it was intended to be used contrary to that state’s law. Significantly it did not have federal enforcement mechanisms and its enforcement was left up to the states. The states did enforce it, often by setting limits on amounts of liquor that could be received by someone for their personal use. A few states banned all importations – becoming what was then called “bone dry.” Moreover, gathering the supermajorities to override a veto opened up the possibility of enacting a prohibition amendment. And the ASL turned its attention to that goal soon after. But before the 18th Amendment was drafted, Congress passed a rider to the postal appropriations act, called the Reed Amendment to the Postal Act, banning interstate liquor shipments into all prohibition territory. This law superseded state laws that might have recognized personal use shipments: it made the prohibition states bone dry.

Consider now how the abortion bans of American states that are going to go into effect after Roe is wiped from the constitutional law are going to be evaded. While there will be transportation networks to bring women seeking abortions to jurisdictions where the procedure is legal, it would be far less difficult to arrange interstate shipment of abortion drugs (such as Mifepristone) that can be self-administered. Using their power to regulate medical care, the anti-abortion states will extend their bans to the use of the pills. But, legally states cannot stop pills moving through interstate commerce and the mails as both routes are under the control of the federal government. In the age of the internet and next day delivery the ability of the states to stop the flow of abortion pills where they are banned will be no more effective than 19th and 20th century states’ efforts against interstate alcohol.

Anti-abortion activists will seek to curtail the mailing and shipping of abortion medications into anti-abortion states. They probably will get states to pass laws prohibiting such shipments. And the further history of prohibition is illuminating on the potential fate of such laws. The prohibition repeal amendment, the 21st Amendment, restated the Webb-Kenyon Act giving the states power over imported liquor by prohibiting the importation of intoxicating liquor to be used contrary to states’ laws. For more than fifty years that authority was upheld by the Supreme Court. But beginning in the 1980s, the Court narrowed the states’ powers. Indeed, in this century, two 21st Amendment cases have implications for potential state attempts to regulate imported abortion drugs. Granholm v. Heald (2005) said states could not ban internet wine sales, and Tennessee Wine v. Thomas (2020, majority opinion by Justice Alito) struck down stringent state restrictions on who could run retail liquor establishments. Both were held to violate the federal government’s power to regulate interstate commerce despite the language of the 21st Amendment. Without the hook of the 21st Amendment to hold, it is hard to see how any state regulation of abortion pills from out-of-state will meet constitutional standards. The path that would be logical would be for anti-abortion states to seek federal legislation to complete their bans. Their political power will determine whether they go for a federal declaratory law allowing states to enforce their law like the Webb-Kenyon Act, or a federal regulatory approach like the COD Act, or a de facto ban like the Reed Amendment. And that raises another question: if they have success, will they then follow alcohol prohibitionists and seek a national ban?