Walter G. Moss is a professor emeritus of history at Eastern Michigan University, a Contributing Editor of HNN, and author of A History of Russia. 2 vols.  For a list of his recent books and online publications click here. 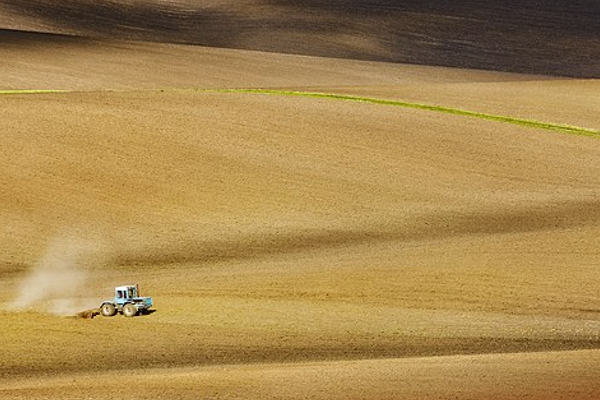 A version of this essay was originally published in the LA Progressive.

Right now the two greatest evils threatening our planet are Putin’s war of aggression against Ukraine and the continuing despoiling of our environment. Regarding the latter, climate change consequences come immediately to mind, but the ecocide (“destruction of the natural environment by deliberate or negligent human action”) presently being perpetrated by the Russian military in Ukraine is also important. Videos coming out of Ukraine clearly indicate that the amount of destruction--not only of people, but also of lands and structures--wrought by Russian planes, missiles, and artillery has been overwhelming. A Rolling Stone article of May 10 declared, “Russia’s invasion of Ukraine is poisoning the country’s land, air, water, and climate in a way that will have longstanding repercussions.”

Kenneth Boulding once wrote “Peace is ploughing and sowing and reaping and making things.” And the farmer, writer, environmentalist, and pacifist Wendell Berry stated, “To corrupt or destroy the natural environment is an act of violence not only against the earth but also those who are dependent on it, including ourselves. To waste the soil is to cause hunger, as direct an aggression as an armed attack; it is an act of violence against the future of the human race.”

Much earlier the Dutch humanist Erasmus (d. 1536) had written:

Peace is at once the mother and the nurse of all that is good for man; war, on a sudden and at one stroke, overwhelms, extinguishes, abolishes, whatever is cheerful, whatever is happy and beautiful, and pours a foul torrent of disasters on the life of mortals. Peace shines upon human affairs like the vernal sun. The fields are cultivated, the gardens bloom, the cattle are fed upon a thousand hills, new buildings arise, riches flow, pleasures smile, humanity and charity increase, arts and manufactures feel the genial warmth of encouragement, and the gains of the poor are more plentiful.

But no sooner does the storm of war begin to lower, than what a deluge of miseries and misfortune seizes, inundates, and overwhelms all things within the sphere of its action! The flocks are scattered, the harvest trampled, the husbandman butchered, villas and villages burnt, cities and states that have been ages rising to their flourishing state subverted by the fury of one tempest, the storm of war.

In his study of British writers and World War I, The Great War and Modern Memory, Paul Fussell has a chapter, “Arcadian Resources” which contrasts that war with the peaceful pre-war rural British environment and pursuits.

Ecocide perpetrated by Russia is nothing new. In the late nineteenth century, the great Russian writer Chekhov bemoaned the “diminishing animals, drying up rivers, and deforestation” he saw his country furthering. In 1992, Murray Feshbach and Alfred Friendly, Jr., in their Ecocide in the USSR: Health and Human Nature Under Siege, updated our knowledge of the saga of Russian ecocide.

By the time Putin came to power at the very end of the twentieth century, he displayed little concern about environmental questions. In late 2021, The New York Times noted that “Mr. Putin long dismissed the scientific consensus that human activity was to blame for the warming of the planet. Rather, he said in 2018, climate change could be caused by “cosmic changes, shifts of some kind in the galaxy that are invisible to us.” But then the continued devastating effects of climate change, especially in Russia, finally convinced Putin to at least acknowledge it might be important to Russia’s future.  Not important enough, however, to prevent him from ordering (in late February 2022) the invasion of Ukraine, which is bringing in its wake devastating environmental damage.

As early as 4 March, more than two months ago, “over 1,000 organizations and individuals from more than 75 countries released an open letter . . . voicing concern over the war’s environmental and human toll.” A month later a piece on the Global Citizen website indicated three major ways the Russian invasion was harming the environment: 1) It was worsening global warming; 2) It was polluting water, soil, and air; and 3) It was harming wildlife and biodiversity.

Let’s examine each of these points in more detail. First, as the U.S. agency NASA indicates, “Human activities (primarily the burning of fossil fuels) have fundamentally increased the concentration of greenhouse gases in Earth’s atmosphere, warming the planet.” The Ukrainian Donbas area, presently the region where most of the fighting is occurring, accounts for almost half of Ukraine’s greenhouse gas emissions. And as the Global Citizen article indicates, “Militaries consume enormous amounts of fossil fuels, which contributes directly to global warming.” Russian jets, which have bombed numerous Ukrainian cities, “can burn through 4.28 gallons of gasoline per mile, with each detonation releasing additional greenhouse gas emissions, and destroying natural carbon sinks like soil, vegetation, and trees.”

In addition, various other Russian wartime activities--including all the movement of vehicles, including tanks, and artillery--were increasing global warming. In early April, to cite just one other type of increase, Russian forces blew up at least a few nitric acid container tanks in Ukraine’s Luhansk Province. Not only did the explosions create air-pollution warnings, but such acid is used in manufacturing fertilizer and some explosives, and reproducing the lost acid would involve a process that releases nitrous oxide into the air. This oxide is a powerful greenhouse gas that has contributed to global warming.

In regard to our second category, pollution, one of the nitric acid explosions mentioned above led a government official to urge the local population to stay inside, close their doors and windows, and wear masks because of the polluted air. Even before the 2022 Russian invasion, the World Health Organization had ranked “Ukraine as the country with the highest health impact from air pollution in Europe.” This was mainly because of Ukraine’s high dependence on fossil fuels (like coal) for producing energy.

As a result of the Russian invasion, toxic-material emissions into water, soil, and the air from fires, destroyed buildings and damaged pipelines, sanitation systems, and industrial facilities like chemical and fuel storage sites have increased. For a while Russian forces occupied the Chernobyl nuclear site and caused a fire at the Zaporizhzhia Nuclear Power Plant, Europe’s largest. So far, the invasion has caused no major nuclear tragedy, but fighting around nuclear sites certainly increases the dangers of a future one.

In addition, all the movement of tanks and heavy vehicles increases air pollution; discarded ammunition sometimes leaks ammonia into waters; and as wars disrupt normal government environmental oversights, it becomes more likely that air and water pollution will increase because of such activities as trash burning and dumping human waste into bodies of water. According to an early May report, Ukraine’s deputy minister of Environmental Protection and Natural Resources stated, “From the first day of the war, we stopped everything that we were doing.” Instead the ministry began concentrating on collecting the war’s environmental-damage data.

Finally, in regard to the harming wildlife and biodiversity, it is illustrative to consider Polesia, sometimes referred to as “Europe’s Amazon.” Although the area also encompasses parts of Belarus, Poland,and Russia, the Ukrainian portion of the area is larger than that of the other three countries combined. Overall, its total landmass is about the size of half of Germany, and its contains pristine forests, large wetlands, and rivers, most significantly the Pripyat.  It is also inhabited by large populations of such animals as bison, lynx, wolves, and 1.5 million migratory birds. A factsheet about the area states it is

home to some of the most biodiverse and culturally rich parts of Europe. The survival of many endangered mammals and millions of birds depends on this untouched landscape. The area not only has tremendous natural intrinsic importance, but also provides immeasurable benefits to people through ecosystem services such as water retention, flood mitigation, clean air, and carbon storage. Polesia also has a strong cultural heritage. Due to their relative isolation the indigenous population of Polesia, Poleshuks, have historically had little contact with people from other regions. Deep in the heart of Polesia, the traditional way of life like the use of local herbal medicine and traditional singing has been very well preserved.

In late March, shortly before it became clear that the Russian military was regrouping in order to focus more on eastern and southern Ukraine, an article on the NewScientist website declared that “Polesia is a war zone, pummelled and churned by Russian tanks. . . .  the assault on Kyiv, launched from Belarus, ploughed straight through its eastern flank. So did the attack on the former Chernobyl nuclear power plant. . . .  Russian advances have also begun to edge towards strictly protected areas in central Polesia.”

In April and heretofore in May, as Russian attack priorities shifted, Polesia has been less directly threatened, but the author of the NewScientist essay was right when he wrote that “Putin cares no more about the destruction” of this biodiverse area “than he does about bombing hospitals and killing civilian populations that stand in his way.”

Lest one think that declining biodiversity just means the loss of some animals we humans don’t need anyway, the British natural historian David Attenborough sets us straight. In his Netflix’s A Life on Our Planet (2020), after ticking off the likely increase in global warming, he tells us how to slow it down: “To restore stability to our planet, we must restore its biodiversity—the very thing that we’ve removed.” For more detail on the exact connection between restoring biodiversity and slowing down climate change, readers should watch Attenborough’s program, where he makes such statements as “The ocean is a critical ally in our battle to reduce carbon in the atmosphere. The more diverse it is, the better it does that job.”

One final harmful effect of Putin’s war should be added to the Global Citizen’s list of three--increasing world hunger. Ukraine has traditionally been a major exporter of wheat, sometimes referred to as the “breadbasket of Europe.” As Erasmus indicated five centuries ago, war ravages farm life.

Other effects of the war cannot yet be seen clearly, partly because the war is ongoing and we do not yet know how it will end--it is still possible for Putin to extend it beyond Ukraine or resort to heretofore unused weapons that could do even more environmental damage.

Although in order to reduce dependence on Russian fossil fuels, it is also possible that the war may hasten some counties transition to renewable energy sources like solar and wind. It is also conceivable that for the same reason, countries might increase their own fossil fuels production while placing less stress on climate-change containment. One point, however, is without doubt. And that is that the Ukrainian war and the terrible destruction it is causing is diverting great amounts of money and world attention away from fighting climate change as a number one priority.

Thus, all of the certainties and uncertainties of Putin’s Ukrainian war make it easy to understand why a lover of the environment like Wendell Berry can hate war so much. Consider the last stanza of one of his early twenty-first century poems, “Look Out.”

Leave your windows and go out, people of the world,
go into the streets, go into the fields, go into the woods
and along the streams. Go together, go alone.
Say no to the Lords of War which is Money
which is Fire. Say no by saying yes
to the air, to the earth, to the trees,
yes to the grasses, to the rivers, to the birds
and the animals and every living thing, yes
to the small houses, yes to the children. Yes.