Walter G. Moss is a professor emeritus of history at Eastern Michigan University a Contributing Editor of HNN. For a list of his recent books and online publications, including those on Russia, click here. His most recent book is In the Face of Fear: Laughing All the Way to Wisdom(2019), which treats humor from a historical perspective. 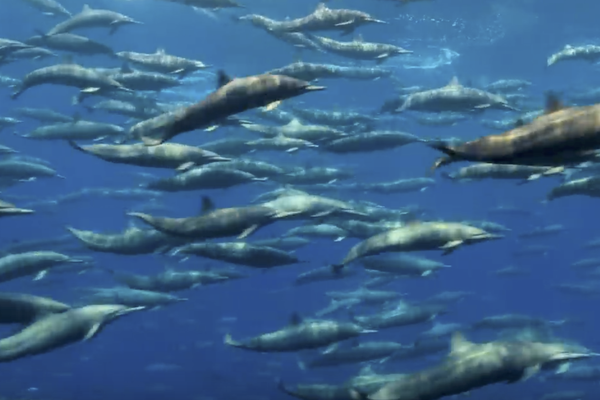 A still from the trailer for Netflix's Our Planet.

As I was watching Netflix’s wonderful eight-part Our Planet series narrated by Sir David Attenborough, I often thought of Anton Chekhov. Like the series, he often displayed a deep love of nature in his hundreds of stories and plays. A doctor by training, he died 115 years ago, at a mere 44 years of age.

Our Planet documents the danger humanity poses to our oceans, sea creatures, and rivers. In Our Planet’s  Episode 6, “The High Seas,” Attenborough criticizes modern fishing practices and warns, that “if we continue to harvest the seas in this way, it's not just fisheries that will collapse. The whole ocean system could follow. One hundred million sharks are killed every year, just to make shark fin soup. Ninety percent of all large ocean hunters have disappeared.” In Episode 7, “Fresh Water,” we hear, “Today, Pacific salmon number less than one percent of the numbers they used to, and that's causing problems for many other animals.” “Until 30 years ago,” Attenborough notes, “rivers in this [eastern] part of Africa never ran dry. Now . . . during the dry season, the rivers shrink into isolated pools.” (All Our Planet quotes are taken from the film scripts.)

In Chekhov’s short story “Panpipes” (1887), an old shepherd in the Russian southern steppe region bemoans the diminishing animals, drying up rivers, and deforestation he sees all around. “What will it be like,” he asks, “if the whole world goes to wrack and ruin?” He mentions birds, cattle, bees, and fish and tells his listener, “If you don't believe me ask any old man. Every one of them'll tell you that fish ain't anything like what they used to be. Every year there's less and less fish in the sea, lakes and rivers.”

Regarding the rivers, the shepherd says, “Every year they get shallower and shallower, there's no longer those nice deep pools there used to be . . . . In my father's day that's where the Peschanka flowed, but now look where the devil's taken it! It keeps changing course and you see, it'll keep changing course till it dries up altogether. . . .  And what became of all them little streams? In this very wood there used to be a stream with so much water in it the peasants only had to dip their creels in it to catch pike, and wild duck used to winter there. But even at spring flood there's no decent water in it now.”

The old shepherd also states that the forests are “being cut down, they catch fire or dry up and there's no new growth. What does grow is felled right away. One day it comes up and the next it's chopped down and so it goes till there's nothing left.”

Our Planet devotes Episode 8 to the “Forests,” and we hear that “a third of Madagascar's forests have disappeared in the last 20 years, a result of the continued destruction of their forests by people. Since these pictures were recorded, this forest, and the unique life it once contained, have disappeared altogether. Only three percent of Madagascar's dry forest remains.”

The effect of this disappearing forest and its life is suggested by other Attenborough comments such as, “There are at least 40 different kinds of lemurs, all unique to Madagascar and all endangered. Lemurs are crucial to the forest. Without them, some species of tree cannot survive.” In Episode 1, “One Planet,” we hear, “In the last 50 years, wildlife populations have, on average, declined by 60 percent.” In May 2019, a UN panel of experts concluded that up to one million animal and plant species are threatened by extinction, endangering ecosystems and eroding “the foundations of our economies, livelihoods, food security, health and quality of life worldwide.”

In Chekhov’s play Uncle Vania (1899), the writer’s views on deforestation are reflected in the views and words of Dr. Astrov.  In Act I, young Sonia introduces some of his ideas:  He “watches over the old woods and sets out new forests every year. . . . He says that forests are the ornaments of the earth, that they teach mankind to understand beauty and attune his mind to lofty sentiments. Forests temper a stern climate.”

Astrov himself says: “You can burn peat [rather than wood] in your stoves and build your sheds of stone. Oh, I don't object, of course, to cutting wood from necessity, but why destroy the forests? The woods of Russia are trembling under the blows of the axe. Millions of trees have perished. The homes of the wild animals and birds have been desolated; the rivers are shrinking, and many beautiful landscapes are gone forever. And why? Because men are too lazy and stupid to stoop down and pick up their fuel from the ground.”

He then adds, “Who but a stupid barbarian could burn so much beauty in his stove and destroy that which he cannot make? Man is endowed with reason and the power to create, so that he may increase that which has been given him, but until now he has not created, but demolished. The forests are disappearing, the rivers are running dry, the wild life is exterminated, the climate is spoiled, and the earth becomes poorer and uglier every day. . . . When I pass village forests that I have preserved from the axe, or hear the rustling of the young trees set out with my own hands, I feel as if I had had some small share in improving the climate, and that if mankind is happy a thousand years from now I'll have been a little bit responsible for their happiness. When I plant a little birch tree and then see it budding into young green and swaying in the wind, my heart swells with pride.” (See here for more on deforestation and global warming.)

Sort of like we see at times in Our Planet, in Act III Astrov shows Elena a district map indicating the forests, vegetation, and animal and human life then existing and as it was fifty and twenty-five years earlier. He itemizes the environmental degradation and concludes: “It is, on the whole, the picture of a regular and slow decline which it will evidently only take about ten or fifteen more years to complete. You may perhaps object that it is the march of progress, that the old order must give place to the new. . . . So it destroys everything it can lay its hands on, without a thought for the morrow. And almost everything has gone, and nothing has been created to take its place.”

Astrov’s comment “the climate is spoiled” does not mean that Chekhov, who died in 1904, foresaw today’s climate-change crisis. As Attenborough suggests, it did not yet exist a century ago. In Episode 1, speaking of Antarctica and the Arctic, he states that “in just 70 years, things have changed at a frightening pace. The polar regions are warming faster than any other part of the planet.” Andin a new BBC production called Climate Change: The Facts, he states, “In the 20 years since I first started talking about the impact of climate change on our world, conditions have changed far faster than I ever imagined.” (He also notes that climate change is “our greatest threat in thousands of years.”) But if not yet able to foresee the full extent of today’s crisis, Chekhov at least was perspicacious enough to realize that deforestation would affect climate conditions.

One final environmental problem that Our Planet and Chekhov both refer to is pollution. In Episode 6, “the High Seas, Attenborough tells us that “plastic pollution is a grave issue for our oceans.” In Episode 7, “Fresh Water,” he refers to polluted springs and the “badly polluted” rivers of Eastern Europe. Much of that latter pollution is due to factories and other producers of industrial waste.

In his long story, “In the Ravine”(1900), Chekhov writes of a village where “there was always a smell from the factory refuse and the acetic acid which was used in the finishing of the cotton print. The three cotton factories and the tanyard were not in the village itself, but a little way off. . . . The  tanyard often made the water in the little river stink; the refuse contaminated the meadows, the peasants' cattle suffered from Siberian plague, and orders were given that the factory should be closed. It was considered to be closed, but went on working in secret with the connivance of the local police officer and the district doctor, who was paid ten roubles a month by the owner.”

Beyond the specific environmental concerns that unite Chekhov with Our Planet’s Attenborough, there lies a philosophy of nature. As one scholar has noted, to Chekhov “man and nature are one, they form a cosmic unity,” and “in his mature period Chekhov increasingly uses attitudes and behavior toward nature as a measure of the character and moral stature of individuals and groups.” (See my long essay “The Wisdom of Anton Chekhov” for the source of this and some other Chekhov quotes.)

This Chekhovian approach to nature characterizes not only Attenborough, but also Pope Francis, who began his environmental encyclical of 2015 by stating that “our common home is like a sister with whom we share our life and a beautiful mother who opens her arms to embrace us.” Like that encyclical, the Our Planet website offers advice to deal with our environmental problems in a more enlightened way than has been done from Chekhov’s time to the present.

Chekhov once stated that “in three or four hundred years all the earth will become a flourishing garden. And life will then be exceedingly light and comfortable.” Despite his environmental criticisms, he realized as Attenborough and Pope Francis do, that we must keep hope alive, for as one recent writer observes, “Pessimism would be an ethical catastrophe. It leads only to despair.”